Scenes from inside Pulse nightclub, during the shootings 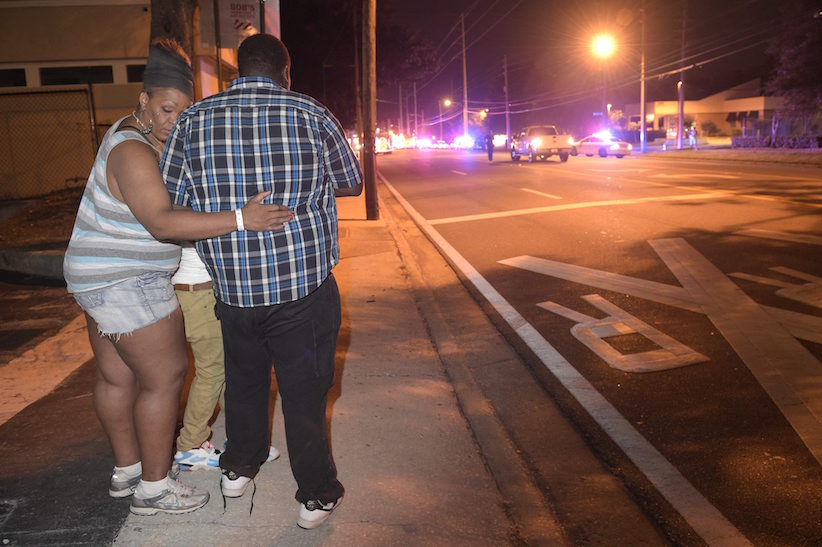 Bystanders wait down the street from a multiple shooting at the Pulse nightclub in Orlando, Fla., Sunday, June 12, 2016. A gunman opened fire at a nightclub in central Florida, and multiple people have been wounded, police said Sunday. (AP Photo/Phelan M. Ebenhack)

ORLANDO, Fla. — Like young people in clubs the world over, Jon Alamo met up with some friends, and then some more friends. He danced in Pulse’s main room, where people swayed to the beat of salsa music. Then Alamo drifted into the club’s two other rooms, which grooved to more of a hip-hop vibe. He remembers hearing Rihanna’s “Work,” one of his favourite songs, and grinding to it on the dance floor.

It was supposed to be just a night of dancing and drinking, of looking good and gleefully partying into the early morning hours. It was Latin night at Pulse, one of Orlando’s top gay venues, and two drag performers were scheduled to perform, one of them a big draw for appearing on a season of the TV show “RuPaul’s Drag Race.”

“I was in the zone,” Alamo recalled. “I wasn’t even paying attention — just dancing.”

The 22-year-old clothing store sales clerk had arrived at the club at 10:30 p.m. Saturday, clad all in blue from his button-down shirt adorned with palm trees to his loafers. About three and a half hours later, the gunshots began and the first of at least 50 people began to die.

Residents of the Delaney Court condos next door to Pulse first heard the shooting about 2:03 a.m. Marlon Massey was watching the movie “Creed” when he heard “pop, pop, pop!” He checked his phone for the time: The shots went on until 2:05 a.m.

A uniformed Orlando Police officer working at the club off-duty had heard gunshots himself and spotted Omar Mateen outside the club. He fired his gun at the 29-year-old security guard from Fort Pierce, Florida, and two other officers quickly joined in. Mateen was not armed lightly: Police said he had an AR-15 assault-type rifle, a handgun and an explosive device.

Undeterred, he re-entered the club. 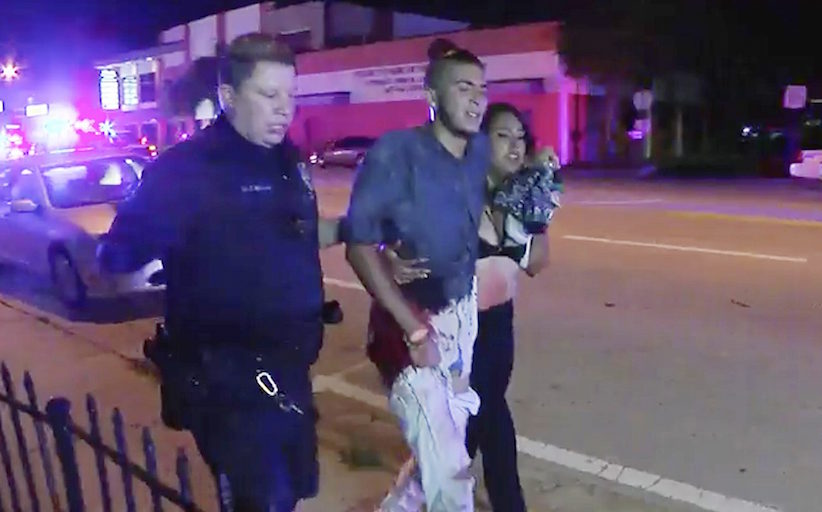 An injured man is escorted out of the Pulse nightclub after a shooting rampage, Sunday morning June 12, 2016, in Orlando, Fla. A gunman wielding an assault-type rifle and a handgun opened fire inside a crowded gay nightclub early Sunday, killing at least 50 people before dying in a gunfight with SWAT officers, police said. It was the deadliest mass shooting in American history. (AP Photo/Steven Fernandez)

Inside, those on the dance floor weren’t sure if what they heard was just part of the DJ’s set.

“Everyone was getting on the floor. … I thought it was just part of the music, until I saw fire coming out of his gun,” patron Rose Feba explained to the Orlando Sentinel.

Mina Justice was sound asleep when she received the first text from her son, Eddie Justice, who was in the club.

“In club they shooting.”

MORE: A son’s heartbreaking text exchange with his mom

It was around this time that Alamo wandered back into the main room.

“He was holding a big weapon,” Alamo said. “He had a white shirt and he was holding the weapon … you ever seen how Marine guys hold big weapons, shooting from left to right? That’s how he was shooting at people.”

Alamo dashed toward the back of one of the smaller dance rooms, and said people then rushed to an area where two bouncers had knocked down a wooden fence to create an escape route.

“My first thought was, ‘Oh my God, I’m going to die,’ ” Alamo said, his voice very quiet. “I was praying to God that I would live to see another day. I couldn’t believe this was happening.”

At 2:09 a.m., Pulse posted a chilling, hurried message on its Facebook page: “Everyone get out of pulse and keep running.”

Brand White and his cousin were on the dance floor in the main room when White’s cousin yelled to him, “B, it’s a guy with a bomb!” Before he knew it, White was hit in the shoulder.

“All of a sudden it just started like a rolling thunder, loud and everything went black,” White wrote in a Facebook message to an Associated Press reporter from his hospital room Sunday. “I think I was trampled.”

He didn’t recall leaving the club, but he remembered the state he was in: “Covered head to toe in blood.”

“I remember screaming and mass chaos,” he wrote. “There were hundreds of people there.”

He made it to the hospital, where he got a blood transfusion. As Sunday wore on, his cousin remained missing.

MORE: Scott Gilmore on the one thing the shooting may change

Brett Rigas and his partner also were dancing in the main room when they heard the crack of gunfire. “About 70 bullets,” Rigas described in a terse Facebook message.

He was shot in the arm and a man next to him was struck in the leg before police entered the room.

“I was behind the bar with four other people under the well. They called out to us and had us run out,” he said.

Rigas saw dead bodies as he barrelled out of the club. In the rush to escape, he became separated from his partner, who remained unaccounted for.

Three patrons, including a performer, ran to the nearby home of club regular David “Brock” Cornelius. Cornelius had gone to a different bar Saturday night and wasn’t yet home, but he texted them his garage code and they hid in his house.

Police said a dozen or so other patrons took cover in a restroom.

At 2:39 a.m., Eddie Justice texted his mother from the bathroom, pleading for her to call police:

Justice asked her son if anyone was hurt and which bathroom he was in.

The last text she received from Eddie was at 2:50 a.m. She still hasn’t heard from her son. 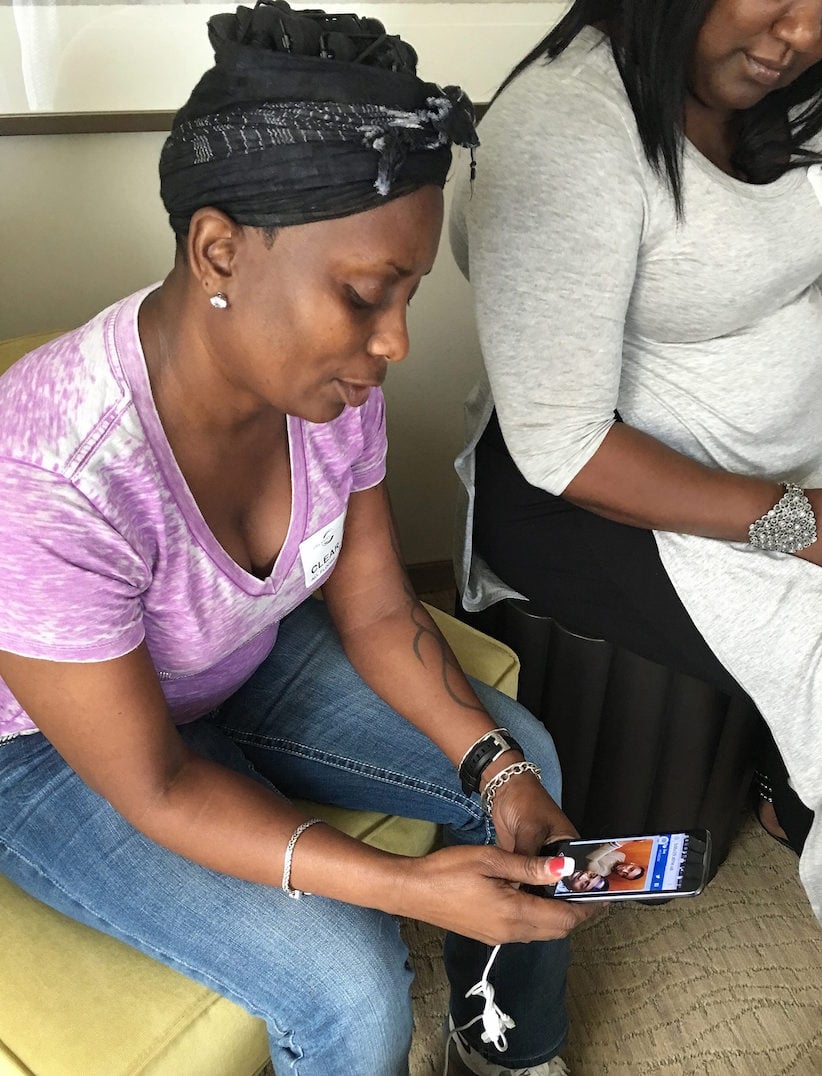 Mina Justice speaks to a reporter discussing texting with her son Eddie Justice who was in a bathroom at Club Pulse, Sunday June, 12, 2016, in Orlando. He hasn’t been found today. A gunman wielding an assault-type rifle and a handgun opened fire inside a crowded gay nightclub early Sunday, killing at least 50 people before dying in a gunfight with SWAT officers, police said.It was the deadliest mass shooting in American history. (AP Photo/Tamara Lush)

“All I heard was gunfire after gunfire,” Brandon Wolf, who was in a restroom hiding, told the Sentinel. “Eventually, I thought you were supposed to run out of ammunition. But it just kept going and going,” he said.

What happened in the three hours after the shooting broke out and the gunman was killed was not immediately clear.

As people lay dying in the club, the shooting developed “into a hostage situation,” Orlando Police Chief John Mina said.

Orlando Mayor Buddy Dyer said that officers initially mistakenly thought the gunman had strapped explosives to some of his victims after a bomb robot sent back images of a battery part next to a body. That held paramedics up from entering the club until it was determined the part had fallen out of an exit sign or smoke detector, the mayor said.

The robot was sent in after SWAT team members used explosive charges and an armoured vehicle to knock down a wall down in an effort to access the club.

About 5 a.m., a decision was made to rescue the remaining club-goers, who authorities said likely were in one of the smaller dance rooms, the Adonis Room. Law enforcement officers used two explosive devices to try to distract the killer and then 11 officers stormed the club and exchanged gunfire with Mateen.

The explosives jolted some Pulse neighbours awake, including Dorian Ackerman, 28, who noted that it was just after 5 a.m.

“I heard a woman screaming,” he said. “It was really terrifying.”

The gunman started firing, hitting an officer who was saved by protective armour.

“That’s when we took him down,” the mayor said.