Paul Wells reports from Scotland that nobody has any clue what's going to happen. 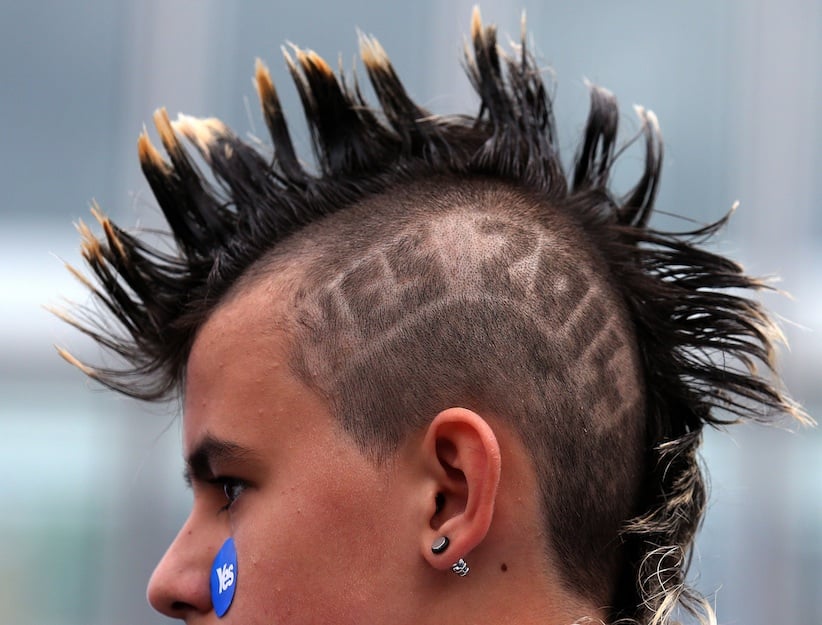 If you wanted to attend a league-sanctioned Better Together event today in Edinburgh — Better Together being the official name of the committee opposed to Scotland’s separation from the United Kingdom — you had your pick between the John Reid event and the Alistair Darling event. John Reid held seven portfolios in seven years while Tony Blair was prime minister. Darling was minister for this and that under Blair, but his heyday came when he served later as Gordon Brown’s Chancellor of the Exchequer, succeeding Brown in that position.

Both men have accomplished more than most of us ever will, but it’s strictly accurate to call them has-beens. I chose the Reid event, based entirely on incorrectly believing he once slugged a protester. That was John Prescott, I learned later. The guy threw an egg at Prescott and he popped him hard on the snoot. The Daily Telegraph hired a boxing analyst, who wrote that it was the best left jab he’d ever seen. But that’s neither here nor there. Reid, who apparently has not punched anybody in public, was scrappy and funny as he laid out the case against secession for a tony No audience — lots of chinos and pink shirts — in a west-end Edinburgh hotel.

If you wanted to attend a league-sanctioned Yes Scotland event in Edinburgh today, there was only one and it’s still under way as I write this: a Concert for Scotland at Usher Hall, the city’s main plush-seat concert venue, featuring musical acts Franz Ferdinand, Mogwai, Frightened Rabbit, Amy Macdonald, McIntosh Ross and Stanley Odd. None of them served in any Tony Blair cabinet, and the audience for tonight’s Yes event was 30 times larger and, at the average, one-third as old as at Reid’s No event.

It’s not a perfectly fair comparison — there have been dozens, hundreds of events, organized by both campaigns or spontaneous, since the campaign leading to Thursday’s vote on Scottish independence began. Each side has drawn huge crowds and disappointing crowds, and each is supported by a broad coalition of voters across all demographics. But there was real symbolism in the appeals each campaign made today.

Reid and Prescott — along with Gordon Brown, the Scot who helped build New Labour as Tony Blair’s lieutenant and then helped dismantle it as his successor — have been among the No side’s most visible campaigners. They are proof that Scots can matter in the corridors of power at Westminster. Or rather, proof they once could. I mean, they’re gentlemen of a certain age these days. As Yes Scotland is fond of pointing out, the Conservatives are in power and Scotland has more pandas than Conservative MPs (the ratio is 2:1).

The No camp’s tactics are well founded. Labour voters have been tempted to vote Yes; the Tony Blair All-Stars are on the field to call them home, and to remind them that Scotland has won a lot through membership in the U.K. (the positive message) and that it has a lot to lose (the threatening message, often delivered in so many words). It’s a measure of David Cameron’s flexibility and pragmatism that he’s letting his adversaries carry the message. (Cameron has visited Scotland in this campaign but not taken any kind of lead role.) It’s also a ghost image of the way a Quebec referendum would have played out if one had happened while Stephen Harper was PM: he’d maintain legal authority but let others, including, one feels certain, Justin Trudeau and Thomas Mulcair, take the rhetorical lead.

But of course if you’re defending the status quo, it’s preferable for the status quo to be something you like to show off. The Yes and No campaigns are not diametrically opposed in style — you can’t shorthand them as Hope vs. Fear, because the Yes has been braying all week about the Westminster government’s supposed “plan” to privatize the National Health Service, so there’s plenty of fear in their rhetorical arsenal as well. But perhaps you could line it up this way: the Yes is about possibility, the No about prudence. Darling, Reid and Brown urge Scots to protect the gains they’ve made. Alex Salmond and Franz Ferdinand want them to dream about what’s possible. And, frankly, not to sweat the details.

I offer no predictions. The polls are close. I haven’t seen much of the country since I got here Friday, and this exercise is so unprecedented nobody knows how to predict. At dinner tonight, everybody around me was talking about voting No, except the young guy at the next table who was impressing his date by gaming out the negotiations around an independent Scotland’s accession to NATO. Nobody has any clue what’s going to happen.