Scott Gilmore at Davos: Elites like refugees, but not Trump 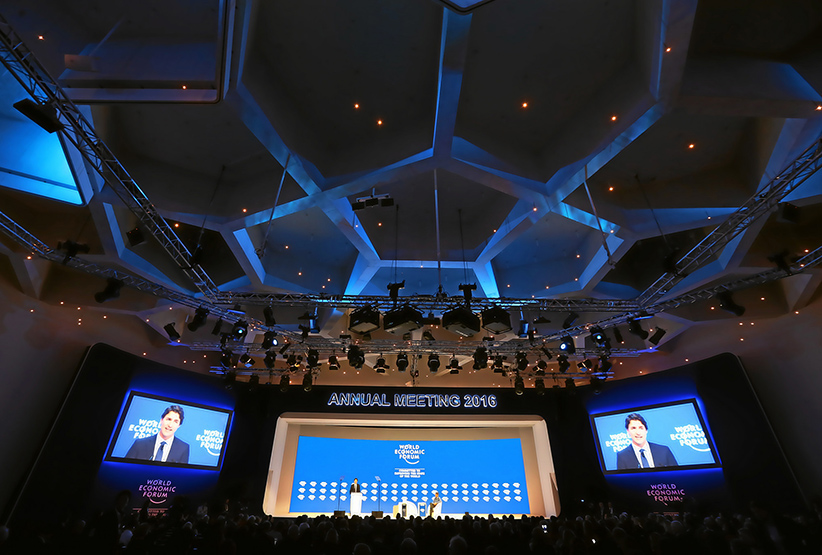 Justin Trudeau, Prime Minister of Canada speaks during the session ‘The Canadian Opportunity’ at the Annual Meeting 2016 of the World Economic Forum in Davos, Switzerland, January 20, 2016. (Michele Limina)

The security at Davos is heavier this year than it has been in the past. There are military checkpoints on the roads up to the remote village; snipers in white camouflage are nested on the snowy rooftops; and some 5,000 Swiss soldiers are patrolling in the town and on the surrounding peaks. Even within the secure Congress Centre, VIPs are trailed by Swiss protection officers making laudable, but mostly ineffective, efforts at discretion. As I write this, I can see one hiding behind a potted fern, speaking into his cuff.

Being an election year, it’s not surprising that one of the most common topics of conversation is American politics. Vice-president Joe Biden gave a keynote address yesterday that appeared to be almost universally well received. I attended an off-the-record event with Secretary of State John Kerry that left many members of the international audience calling him the best president the U.S. never had.

But the most conspicuous American politician at Davos is not here, Donald Trump. American delegates of all stripes, sitting on stages or standing in cocktail parties, are getting the same question: “Is this for real?” This is not asked in a tone of condescension or bemusement, but genuine concern. In one debate on the state of the international economy, there was a consensus that global market turmoil is partly due to investors beginning to take Trump seriously, and they are worried.

I had a startling conversation with a former member of the Obama White House who is now working on the Clinton campaign. He confirmed reports that the candidate’s volunteer and donor base is not nearly as energized as four years ago. Her team is no longer dismissing Trump as the preferred opponent, believing he is far better organized than previously thought. They also think his notorious anti-Islam statements were clever gambits “to buy futures in the fear market.” In other words, if the U.S. suffers a terrorist attack between now and the election, he will immediately collect 10 points in the polls.

There was a private lunch yesterday to discuss the commercial value of “big data.” An enthusiastic banker talked about the benefits of collecting and analyzing increasingly large amounts of their clients’ personal information. “We’ve learned that the best predictor of loan repayments is not a credit score, it’s the amount of time the borrower spends volunteering for non-profits.”

The BBC’s senior Canadian, and recent Order of Canada appointee, Lyse Doucet did a masterful job moderating a lively debate on the refugee crisis. Watching the European politicians spar with each other and with the audience was like sitting in on someone else’s family fight.

The point that was broadly (but not universally) agreed upon is that this is an integration, not a migration, crisis. By contrast, opinions were surprisingly fractured on the stability and utility of the Schengen Agreement (the 30-year-old treaty allowing for free cross-border movement within the European Union). While some of the politicians pleaded that it would be a political and economic disaster to begin closing internal borders to stem migrant flows, others (notably Poland), merely shrugged and pointed out that the agreement already contains provisions to do just that.

The panelist who came off the best was Britain’s David Miliband. Technically he is no longer a politician, having resigned as a member of Parliament to take up the presidency of the International Rescue Committee. But one gets the impression this may be a temporary retirement. Miliband energetically dismissed concerns that the refugees are merely economic migrants, pointing out that 79 per cent are from two of the most war-torn countries in the world: Afghanistan and Syria. He also emphasized that even at the seemingly high levels of one million new arrivals a year, that is within the context of a European population of half a billion. All of this was very convincing, and reflected the general attitude among Davos attendees, but recent polls show that the majority of Europeans do not share these opinions, a point conceded ruefully by (most) everyone on stage.