Brexit is an ugly mess, no doubt, but here are four reasons why peace and prosperity will likely prevail 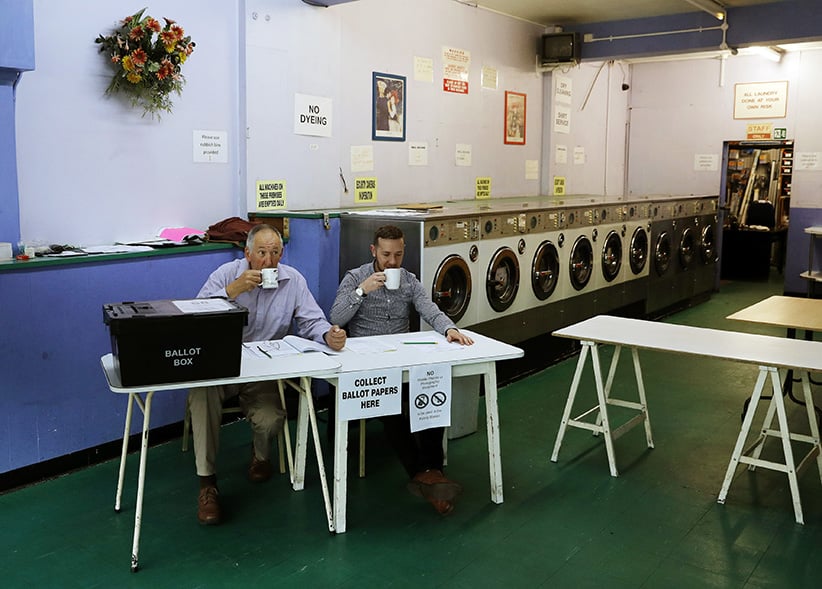 A presiding officer (L) and poll clerk (C) drink a cup of tea while waiting for early morning voters at a polling station set up in a launderette in Headington outside Oxford on June 23, 2016. Millions of Britons began voting today in a bitterly-fought, knife-edge referendum that could tear up the island nation’s EU membership and spark the greatest emergency of the bloc’s 60-year history. (ADRIAN DENNIS/AFP/GETTY IMAGES)

I’m not the type of person who stays up all night waiting for election or referendum results. My philosophy is this: one way or another, tomorrow will reveal itself, so there’s no point in losing sleep over it.

And, so it was Thursday night. After a late dinner, there were worried reports the British may have chosen to leave the European Union. The vote was razor close, and given how much was on the line, it seemed like much of the world was staying up to watch the results, tense and disbelieving.

Regardless, I went to bed, and slept well. But not because I was indifferent. I am a passionate supporter of the European experiment. The EU, in my eyes, has always represented man’s better instincts. Nations, who had fought and killed each other since Caesar conquered Gaul, built a new type of society that transcended borders and bigotry and gave the continent the longest stretch of peace it has ever known. When I woke, the results left me shocked and saddened. Putin was gloating, Le Pen was celebrating, the markets were crashing, and every story brought more bad news and more worries.

Britain’s departure from the European Union is an ugly mess that will change and diminish so much. But, it is not the end of the world.

First, we still don’t even know what Brexit means. The range of possible outcomes is very wide. It was revealed this morning that the German contingency plan includes negotiating an “association agreement” with the United Kingdom to keep the economies linked. The current Schengen Treaty which abolishes border checkpoints between European nations already includes non-EU members like Iceland. As does the EU Customs Union, which eliminates any tariffs on goods. It is possible to imagine a Brexit future which is not noticeably different from what we have now.

Second, consider Norway and Switzerland. Most non-Europeans are surprised to learn they have never been members of the European Union. They, however, have negotiated a series of treaties giving them most of the benefits while avoiding many of the problems. Like London is now, Zurich and Oslo are prosperous, dynamic, cosmopolitan European cities. Brexit does not mean this has to change.

Third, it is impossible to truly separate in the 21st century. Inside and outside the European Union, countries and people have never been closer, never been so integrated. We now travel constantly. The number of intra-European airline routes has more then tripled since 1992. The constant movement of people between Britain and the EU will continue. Social media, which did not even exist 15 years ago, now means a joke in Manchester makes it to Marseille in minutes. This will not change. And a globalized economy, not a Brussels bureaucrat, will ensure a British marmalade maker will continue to label his jars in Italian and Spanish and half a dozen other European languages.

Finally, remember that British voters under the age of 50 overwhelmingly chose to remain in the European Union. The referendum results were directly correlated to age. The older generations voted to leave, the younger wanted to stay. And, guess what? The Brexit generations are dying off, there are fewer of them every day. Even better, the youth who supported the European Union today will be in charge tomorrow. If Britain can leave, it can also rejoin. And in a very few short years, this demographic change, combined with the inevitable realization that Nigel and Boris made promises they couldn’t keep, will ensure that Britain’s place in Europe will be debated again.

The news coverage over the next few weeks, and possibly years, will doubtlessly be alarming. The spectre of the United Kingdom collapsing, or the European Union dissolving will inevitably haunt us. But the daily news has always been alarming, and we have always been haunted. And yet, here we are. It’s 2016. Brits and Europeans are living longer than they ever have, they are wealthier than they have ever been, and the continent is more peaceful than it ever was. And this isn’t going to change soon. No one knows what the Brexit vote will mean, but tomorrow will ultimately reveal itself, and there’s no point in losing sleep over it.