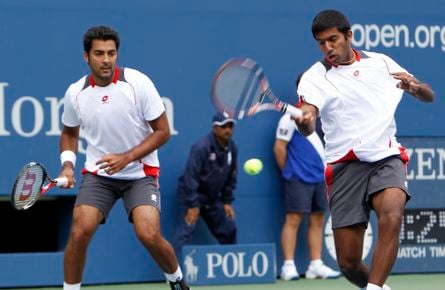 Pakistan’s No. 1 tennis player, Aisam-ul-Haq Qureshi, is the first of his countrymen to make it to the final of a Grand Slam. Before losing to American identical twins Mike and Bob Bryan, the tennis champ had a chance at winning both the men’s and mixed doubles finals of this year’s U.S. Open. But for Qureshi, there was more riding on his matches than simple sporting rivalry. To him, tennis is about world peace.

The 30-year-old has become something of a goodwill ambassador on and off the courts, drawing international attention for his unlikely alliances. In 2002, the Muslim player partnered with Amir Hadad of Israel for the doubles event at Wimbledon. While they made it to the third round at the prestigious tournament, and won the Arthur Ashe Humanitarian of the Year award for their union, Qureshi was lambasted back home and threatened with expulsion from the Davis Cup by the Pakistan Tennis Federation.

But that didn’t stop Qureshi. Soon after, he formed the “the Indo-Pak Express” by partnering with Rohan Bopanna—a player from Pakistan’s rival, India, which has waged three wars with Qureshi’s country since independence from Britain in 1947. Qureshi, who started playing tennis as a boy on Lahore’s grass-covered courts, has often said sports should be above politics and religion. “If me and Rohan can get along so well on and off the court,” he says, “there’s no reason Indians and Pakistanis can’t get along with each other.” He has also said, “Indians are my best friends on tour because we speak the same language, eat the same food, and we have the same culture.”

The partnership between the Indian and Pakistani player did not begin with politics in mind. They met at the age of 16, became great friends, and started playing together in 2003. They say their talents and personalities were simply complementary. (Bopanna is a businessman whose family runs a coffee plantation, and Qureshi descends from tennis stock; both his grandfather and mother were tennis champs in South Asia).

On the court, the men—now ranked 15th in the world—sport T-shirts that read, “Stop War Start Tennis.” And Qureshi is also part of the Champions for Peace club, a group of athletes dedicated to bringing peace to the world through sport. Reaching the U.S. Open brought them closer to realizing their diplomatic goals than ever before. For example, as they beat Argentina’s Eduardo Schwank and Horacio Zeballos earlier this week, the United Nations ambassadors from their respective countries sat together, united by their excitement as they cheered the duo on.

Despite their loss today, the match could be seen as a partial victory: the Bryans have said they will donate half of their prize money to the floods in Pakistan. Moreover, these high-level matches have brought more attention to the racket-toting peacekeepers.

Qureshi’s efforts are laden with meaning for Pakistan at this particular moment in history: one-fifth of the country is underwater, while suicide bombers continue their vicious campaign. The most recent blow to the country’s national pride came as its beloved sport, cricket, was rocked by scandal when three stars were suspended by the International Cricket Council for alleged match-fixing.

With his movie-star good looks, Qureshi been approached by modelling agencies and Bollywood. But he will continue to focus on his diplomatic sporting mission. Robert Davis, Qureshi’s long-time coach, says he has noticed that both Qureshi and Bopanna have become more astute observers of international affairs, reading up on geopolitics as they gain prominence. For now, Qureshi sees their tennis games as “one small step toward [peace].” He dedicated his efforts on the court to the 21 million flood victims in Pakistan, and says he hopes his positive image can change perceptions about Muslims among Americans. “We always said sports can reach places where no religion or politics can reach,” says Qureshi. “I think it’s above all the religion and politics.”