Of the 35 recommendations made by the National Transportation Safety Board in response to the incident involving US Airways Flight 1549, only six have been successfully completed 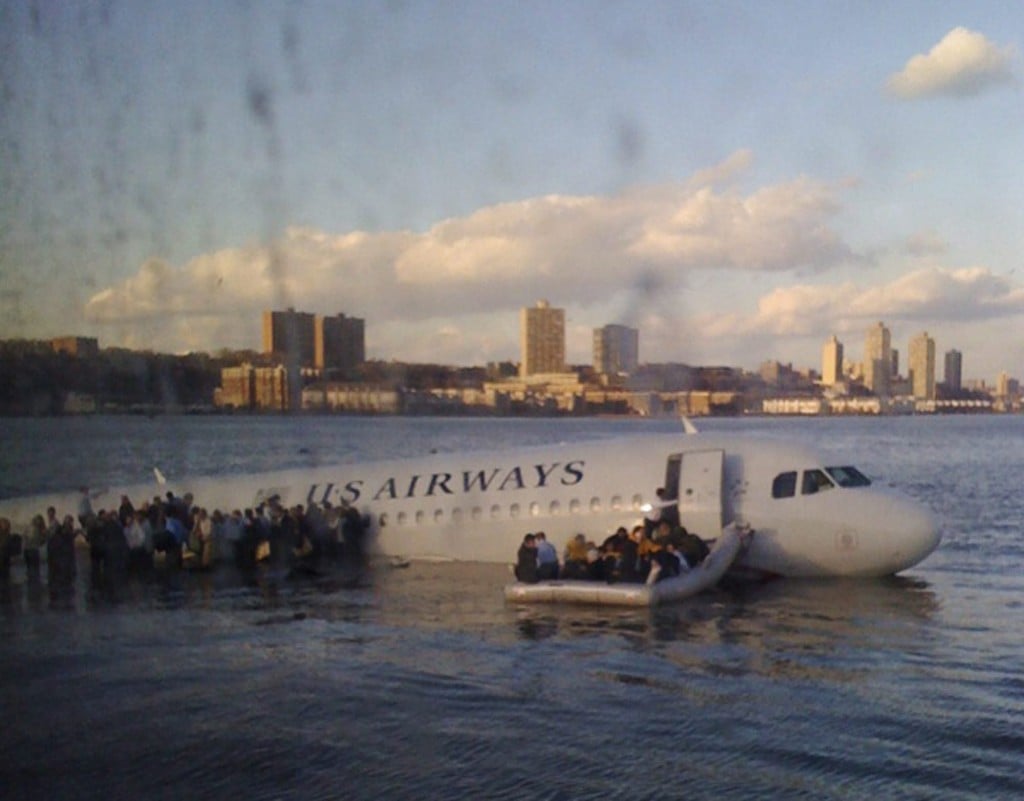 In this photo taken by a passenger on a ferry, airline passengers egress a US Airways Airbus 320 jetliner that safely ditched in the frigid waters of the Hudson River in New York, Thursday Jan. 15, 2009 after a flock of birds knocked out both its engines. All 155 people on board survived. (AP Photo/Janis Krums)

WASHINGTON — More than seven years after an airline captain saved 155 lives by ditching his crippled airliner in the Hudson River, now the basis of a new movie, most of the safety recommendations stemming from the accident haven’t been carried out.

Of the 35 recommendations made by the National Transportation Safety Board in response to the incident involving US Airways Flight 1549, only six have been successfully completed, according to an Associated Press review of board records. Fourteen of the recommendations issued to the Federal Aviation Administration and its European counterpart, EASA, are marked by the NTSB as “closed-unacceptable.” One has been withdrawn, and the rest remain unresolved.

The movie “Sully,” which opened in theatres last week, celebrates how veteran pilot Chesley “Sully” Sullenberger, played by Tom Hanks, along with his co-pilot, flight attendants, air traffic controllers, ferry boat operators and first responders did their jobs with professionalism and competence, averting a potential tragedy. The plane lost thrust in both engines after colliding with a flock of Canada geese shortly after takeoff from LaGuardia Airport in New York. No one died, and only five people were seriously injured.

“The FAA was very upset back then that we made any recommendations at all,” recalled Tom Haueter, who was the NTSB’s head of major accident investigations at the time. “They thought this was a success story.”

But to investigators, the event turned up problems. “This could happen again and we want to make sure that if it does, there are some better safety measures in place,” Haueter said.

Recommendations that got an “unacceptable” response deal with pilot training, directions for pilots facing the loss of power in both engines, equipping planes with life rafts and vests and making it easier for passengers to use them, among other issues.

The untold story of the “Miracle on the Hudson” was the part luck played in preventing catastrophe on that freezing afternoon in January 2009. The wind chill was 2 degrees and the water temperature was 41 degrees, raising the risk of “cold shock,” a condition in which people lose the use of their arms and legs, usually drowning within 5 minutes.

It was sheer chance that the plane, an Airbus A320, was equipped with rafts, life vests and seat cushions that can be used for flotation. The equipment is only required on “extended overwater” flights, and not on Flight 1549’s New York to Charlotte, North Carolina, route.

The NTSB recommended requiring life vests and flotation cushions on all planes, regardless of the route. But the FAA responded that it was leaving that up to the airlines.

The board also recommended that vest storage be redesigned for easier retrieval. The NTSB’s investigation found that only 10 passengers retrieved their life vests and not all of them put them on correctly. Despite some changes by the FAA, the board says it still takes more than a few seconds to retrieve vests, which is as much time passengers are willing to take when exiting a plane filling with water.

Because Flight 1549’s descent was faster than the plane is designed to handle for a ditching, the underside of the aircraft was damaged when it hit the water. The two rear rafts were submerged and unusable. That left only the two forward life rafts, which are designed to hold a maximum of 110 people — well short of the 155 on board. Many of the passengers wound up standing on the wings as the plane gradually sank into the river.

The NTSB recommended changing the location of rafts and slides that double as rafts to ensure capacity for all passengers, since it’s unlikely the rear rafts would be available. The FAA rejected that, saying that if Sullenberger had followed Airbus’ directions on descent speeds for ditching, the rear rafts would have been usable. The NTSB replied that the ability of pilots to achieve those descent speeds has never been tested and can’t be relied on.

Some passengers wound up using the inflated ramps as rafts even though they’re not designed for that. But passengers weren’t able to release the ramps from the plane, running the risk that the ramps would be pulled underwater along with it. The NTSB recommended requiring quick-release attachments for the ramps. The FAA rejected the advice, saying its analysis showed that the attachments were likely to be fully or partially underwater. NTSB said its investigation showed that wasn’t the case.

In the movie, immediately after Flight 1549’s engines quit, first officer Jeff Skiles, played by Aaron Eckhart, began going through a checklist of procedures for restarting the engines. Pilots are trained to do that in an emergency when they don’t know how to fix a problem, but Skiles was only able to get through a fraction of the checklist items before the plane landed in the river.

The NTSB’s investigation showed the procedures were designed for a dual-engine failure at a cruising altitude above 20,000 feet, high enough for pilots to complete the list while descending and still have time to regain altitude. But Flight 1549 collided with the geese at an altitude of only 2,818 feet. Among NTSB’s closed-unacceptable recommendations are that the FAA require airlines to include procedures for a low-altitude, dual-engine failure in checklists and pilot training.