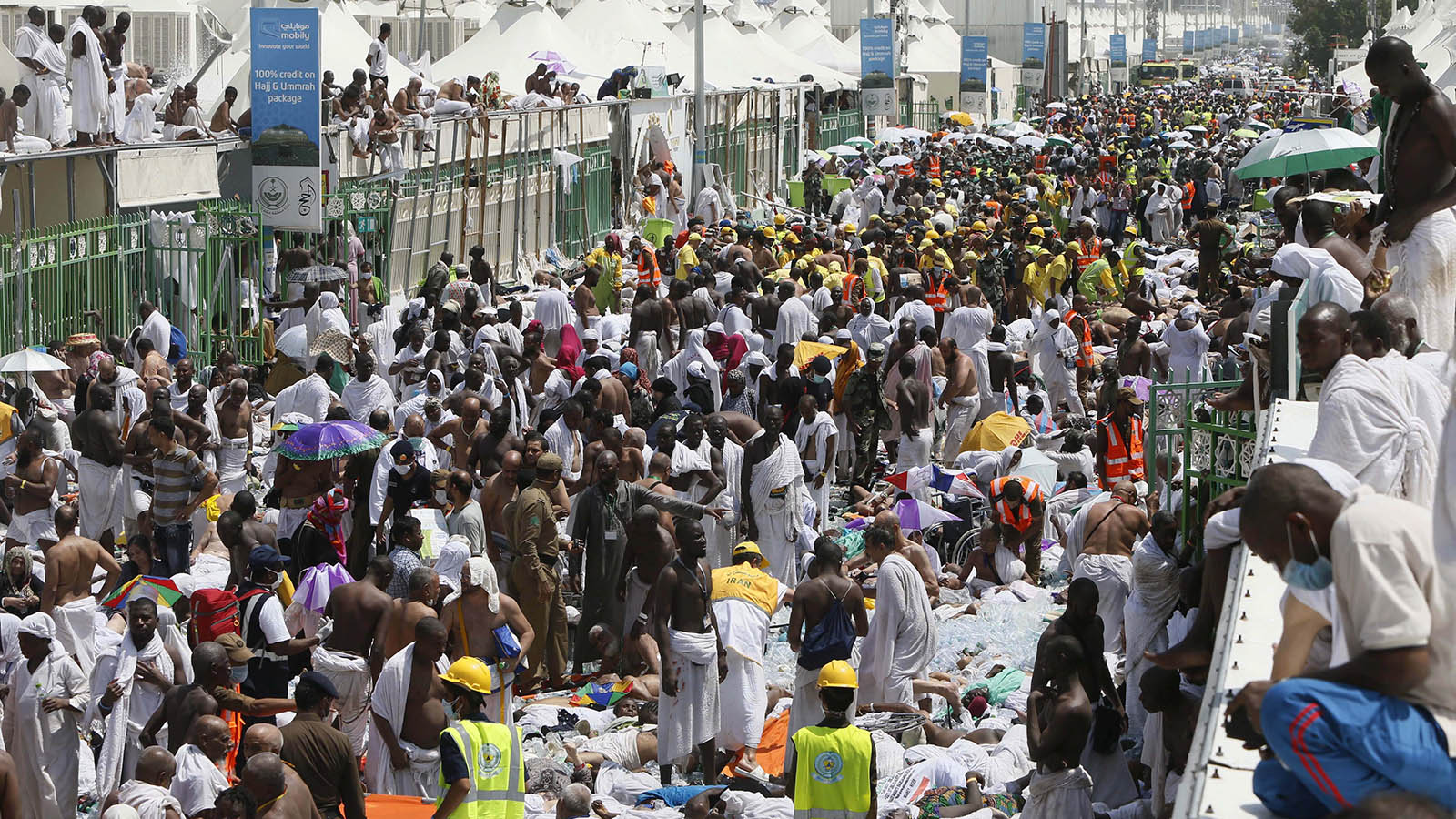 Muslim pilgrims and rescuers gather around the victims of a stampede in Mina, Saudi Arabia during the annual hajj pilgrimage on Thursday, Sept. 24, 2015. Hundreds were killed and injured, Saudi authorities said. The crush happened in Mina, a large valley about five kilometers (three miles) from the holy city of Mecca that has been the site of hajj stampedes in years past. (AP/CP)

King Salman of Saudi Arabia’s most important title has little to do with politics and everything to do with faith. He is “custodian of the two holy mosques” in Mecca and Medina, and is therefore responsible for the hundreds of thousands of pilgrims who every year travel to Mecca for the Hajj—a mandatory religious duty for Muslims and one of the five pillars of Islam.

As the world’s population has soared, and travel has become more accessible, the numbers making the pilgrimage have grown. Whereas only 70 years ago, maybe 100,000 would come, this year about two million did. Today, more than 700 of them died.

They perished during a stampede that occurred as crowds converged to throw pebbles at seven stone pillars representing the devil. Saudi authorities say the victims were of “different nationalities.” At least 90 of the dead were reportedly Iranian.

The scale of the disaster, shocking as it is, is not unprecedented. More than 1,400 pilgrims were killed during a Hajj stampede in 1990. In fact, multiple-fatality incidents were a semi-regular occurrence until 2006, when more than 350 people died.

Since then, Saudi Arabia has spent billions of dollars in safety measures and upgrading infrastructure around pilgrimage sites. The measures seemed to have worked for a time, restoring some prestige that Saudi Arabia had lost by presiding over an almost predictable annual tragedy.

That’s all shattered now. The exact reasons for the deaths today are unknown. A Saudi minister reportedly blamed pilgrims he said did not “respect timetables.” Saudi Arabia has promised an investigation. Iran’s supreme leader, Ayatollah Ali Khamenei, blamed Saudi “mismanagement,” adding a potential layer of sectarian and geopolitical belligerency to the deaths. Iran considers itself the champion of Shia Muslims, while Saudi Arabia sees itself as the world’s leading Sunni power.

Undoubtedly, the enormous crowds and heat played a role. Survivors of past stampedes speak of individuals collapsing and fainting, and then panic gripping a crowd as people scramble for air and space.

Questions will inevitably be asked about what Saudi Arabia could and should do differently to protect pilgrims. This is a kingdom whose rulers enjoy wealth most people completing the Hajj can scarcely comprehend. Surely a country that sells the world hundreds of billions of dollars worth of oil every year can afford to do whatever is necessary to keep its guests safe. Salman is caretaker not just of the two holy mosques, but also of those who visit them.