Shooting holes in the self-perpetuated myth of the NRA

Politicians and regular citizens alike cower in the NRA’s long shadow, as though it were some Old Testament deity. It's not. 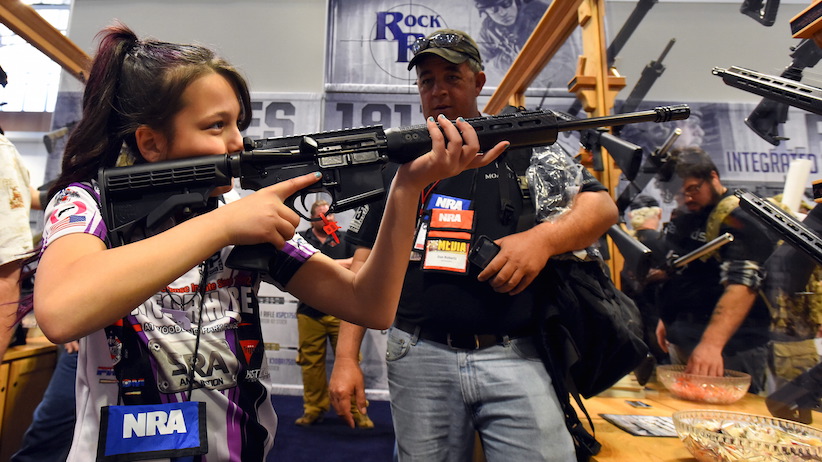 The greatest feat of the National Rifle Association over the years hasn’t been to consistently stymie gun control measures in America. Nor is it the equally successful gambit of legitimizing the right to own weapons like the AR-15, which can easily (and, in most states, legally) be modified to fire 900 rounds a minute, despite the thousands of innocent Americans felled by that particular model.

No, the NRA’s masterstroke has been the perpetuation of its own myth.

The NRA myth has two parts: that the federal government exists largely to separate its citizens from their firearms; and that the NRA itself is the lone, all-powerful bulwark against this constant tyranny. The ensuing paranoia provoked by the first part has fed the latter, to the benefit of NRA membership roles. In 1964, membership stood at about 600,000; today, it is somewhere between four and five million.

The legacy of the NRA myth is legion. The NRA has halted dozens of pieces of legislation aimed at keeping guns out of the hands of murderous people. It was instrumental in neutering the Federal Assault Weapons Ban, in part by grandfathering hundreds of thousands of assault weapons manufactured before the bill’s passing in 1994. The organization played a key role in the legislative push that saw the ban put to pasture 10 years later. It has been the face of pro-gun obstinacy in the wake of dozens of mass shootings, when public outrage against guns is at its fiercest. Through its political donations, it has seeded a seemingly permanent opposition to any new gun laws. Politicians and regular citizens alike cower in the NRA’s long shadow, as though it were some Old Testament deity.

Cracks, however modest, began to show in the NRA myth this week, as U.S. President Barack Obama vowed to address gun violence in the final year of his presidency. In a tearful press conference, surrounded by victims of gun violence, Obama promised to enact executive actions that would bolster the existing system of federal background checks, as well as precisely define who must be licensed to sell firearms. In theory, anyway, this would put an end to the so-called “gun show loophole,” which allows sellers at flea markets and the like to sell arms without background checks.

As is often the case with Obama, the pageantry exceeded the scope of his propositions. He didn’t propose a ban on assault weapons like the AR-15. Moreover, funding for the Bureau of Alcohol, Tobacco, Firearms and Explosives, which enforces federal gun laws, has barely kept up with inflation and has seen staffing decreases over the last 15 years. Obama’s announcement won’t likely fix this situation.

Yet in wielding his executive power and promising to go above a recalcitrant, Republican-dominated congress, Obama has made himself even more a target of this supposedly vast and vengeful organization. In doing so, he’s made an important political calculation, one which has been plain to see for nearly as long as it has existed. The well-entrenched NRA myth is just that: a myth.

Let’s begin with its supposed lobbying muscle. According to statistics compiled by Opensecrets.org, the NRA ranks 74th out of the top 100 political contributors. This puts them only slightly ahead of the likes of the Air Line Pilots’ Association, and behind the Ironworkers union. During the 2014 election cycle, for example, the NRA spent $810,000 in political donations. By contrast, Everytown for Gun Safety, the pro-gun-control organization founded by billionaire former New York mayor Michael Bloomberg, spent nearly double this amount.

If the NRA’s parsimony has paid dividends, it’s because ideologically inclined politicians come relatively cheap. Louis Gohmert, Republican Representative from Texas, received all of $1,000 in 2014 from the group, yet has been amongst the most fervent critic of gun control measures throughout his 11 years in Washington. (He claimed armed teachers and staff could have prevented Adam Lanza from killing 26 people, including 20 children, during the Sandy Hook shootings in 2012.)

The NRA instead relies on a cadre of motivated volunteers to get out the single-issue vote, and the country’s gun shops and clubs to sell the NRA’s paranoid message. Its media campaign, all bullets, brawn and implied violence against its foes is simple and effective.

To the organization’s credit, it has been remarkably successful. Gun control laws, when enacted, are usually done so piecemeal by state governments, meaning the country remains a legislative patchwork; anyone in Sandy Hook who wants an AR-15 despite the state’s ban can drive the three hours to New Hampshire, where they will be greeted with open arms.

Yet for all its glad-handing and recalcitrance, the NRA hasn’t been successful in stemming the slow march of public opinion away from its cause. Truly universal background checks and the closing of the gun show loophole, advocated by the President this week, enjoy support amongst Democrats and Republican voters. Ditto bans on sales of weapons to people on terrorist watch list. Both are opposed by the NRA.

Obama has been the NRA’s boogeyman since even before the days he took office. It is a mark of the NRA’s fallibility that the President has essentially embraced this caricature—and how much of America seems to be behind him.