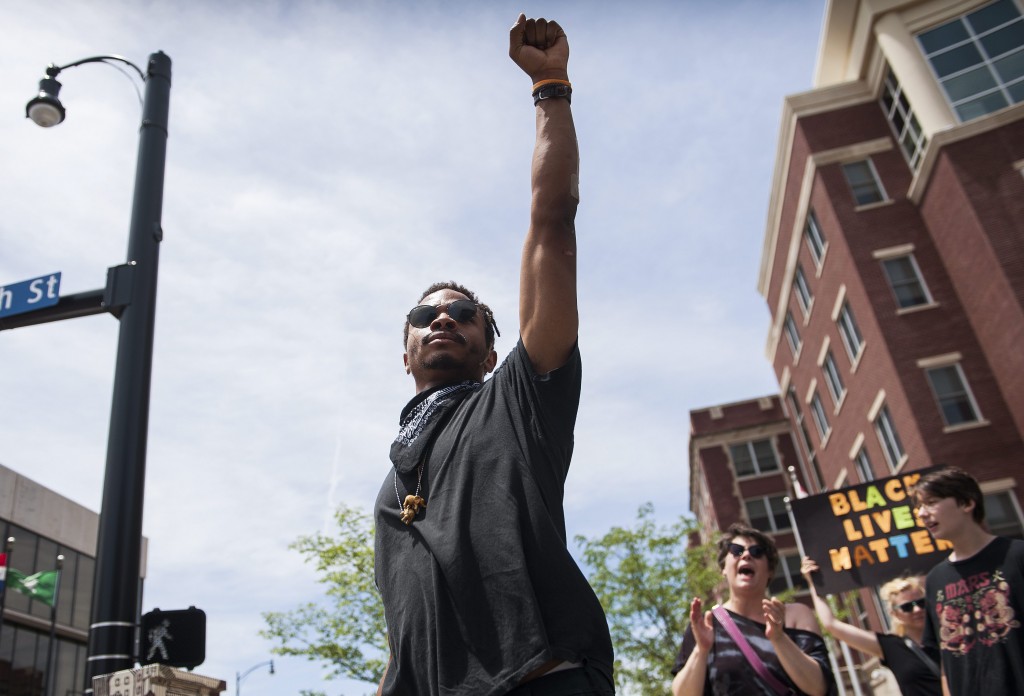 Jamie Davis, center, marches and chants with others Thursday, July 7, 2016, in Columbia, Mo., in protest of recent police shootings of African-Americans. Protesters from Black Lives Matter and other groups and individuals marched through the streets.(Daniel Brenner/Columbia Daily Tribune via AP)

Philando Castile put on a suit and tie to interview for a supervisory position in the school district where he had worked since he was a teenager. He told the interviewer his goal was to one day “sit on the other side of this table.”

His upbeat disposition won him the job.

“He stood out because he was happy, friendly and related to people well,” said Katherine Holmquist-Burks, principal at J.J. Hill Montessori in St. Paul, Minnesota, who hired him to oversee the school cafeteria.

Now, colleagues and family members are trying to understand why a police officer in a St. Paul suburb fatally shot Castile, 32, after stopping his car Wednesday night. The Justice Department announced it would monitor the state investigation of the shooting, which Gov. Mark Dayton said would look at whether Castile’s race played a role. Castile was black.

A passenger in the car, Castile’s girlfriend, said the officer was Asian. She said he opened fire when Castile reached for his identification. She said Castile had a license to carry a firearm.

Castile graduated from Central High School in St. Paul in 2001 and joined the school district’s Nutrition Services Department when he was 19. He worked at two schools before getting his promotion at J.J. Hill in 2014.

Students at the magnet school came to know him as “Mr. Phil,” a gregarious man who sneaked students extra graham crackers and other treats in the lunch line.

“He always gave you a high-five after lunch,” 9-year-old Jas Gilman said.

Holmquist-Burks, who retired last week, said he loved his job and never missed work or drew a complaint. Castile supervised two employees and ran the cafeteria for a school with 530 students and 85 staff.

He helped “create a warm, welcoming friendly environment in our cafeteria,” she said.

Holmquist-Burks said that after she heard about Castile’s death, she went to the vigil being held at the governor’s mansion.

A cellphone video shot by Castile’s girlfriend, Diamond Reynolds, immediately after the officer opened fire indicated the officer may have believed Castile was reaching for a weapon.

Castile got a license to carry a firearm “for safety,” said Dewanda Harris, 52, Castile’s cousin. Harris, of Glendale, Arizona, said she watched Castile grow up in St. Paul alongside her son, who was about the same age.

Of the gun, she said, “I discussed it with my son and he began to tell me about them going to the gun range. All of them got licenses to carry,” Harris said of Castile and other family members. “All of them do. They got it to protect themselves.”

Harris said Castile would not have posed a threat.

“I know he was doing the right thing. Phil was a good kid. I’m stunned by this,” she said.

Other colleagues of Castile’s at J.J. Hill described Castile as a team player who got along well with everyone.

“We’re all just so surprised,” said teacher Amy Hinrichs, who said she spoke with Castile every day when he came in at 6:30 a.m. to set up the school’s breakfast. “He was the calmest, nicest man. He was generous, kind. He remembered all the kids’ allergies. He was never a complainer.”

“He loved those kids so much,” teacher Anna Garnaas said at a vigil for Castile outside the school Thursday evening. “And he will be so missed, by the people who got to work with him every day.”