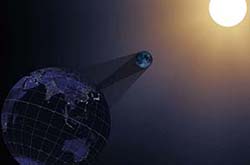 An illustration of the 2017 solar eclipse. (NASA)

If you couldn’t make it to the path of totality for Monday’s eclipse—or if you forgot your protective glasses at home—NASA’s got you covered. The space agency has a four-hour stream “with unprecedented live video of the celestial event, along with coverage of activities in parks, libraries, stadiums, festivals and museums across the (U.S.), and on social media.” Be sure to check out Scott Feschuk channelling President Donald Trump on what really caused the solar eclipse.

Sky watchers in Victoria will get the best view in Canada. Ninety-one per cent of the sun will be blocked in the B.C. capital. Vancouver gets the second-best view (88%) among Canadian cities.

Views of the solar eclipse from Canada

The black line over the U.S. is the path of the solar eclipse. Find out how much of it you’ll be able to see from your city and what time it will appear.