Somali minister among 15 killed in extremist attack on hotel

Fifteen killed in al-Shabab attack in Mogadishu, with at least 34 injured 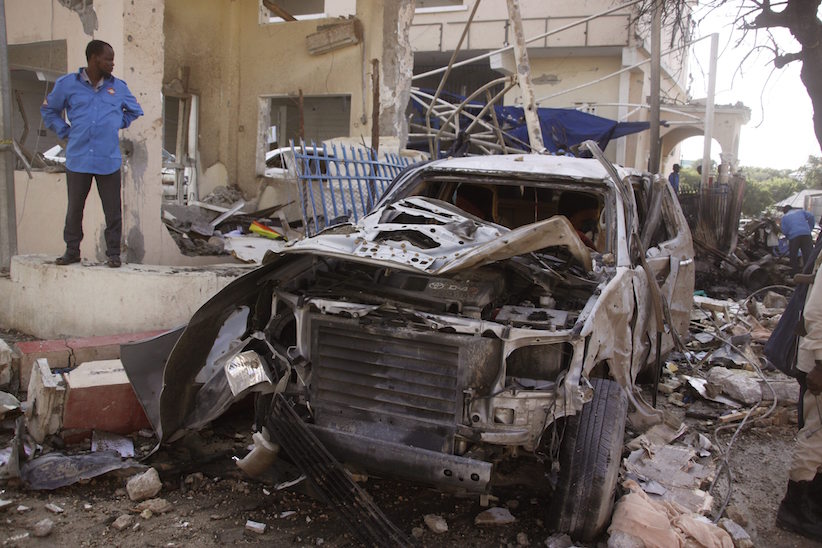 A Somali security man stands near the wreckage of a car near Nasa-Hablod hotel in Mogadishu, Somalia, Sunday, June 26, 2016. Islamic extremist group al-Shabab claimed responsibility for the latest in a series of hotel attacks in Mogadishu, one that began with a powerful explosion at the entry gate. Police said the attack began when a suicide bomber detonated an explosives-laden vehicle at the hotel entrance, ripping off its gate. (AP Photo/Farah Abdi Warsameh)

MOGADISHU, Somalia – A Somali cabinet minister with links to Canada is among the 15 killed in an Islamic extremist attack on a hotel in the capital, police say.

Four attackers also died in the assault which was claimed by al-Shabab, Somalia’s militant rebels who are allied to al-Qaida.

State Minister for the Environment, Buri Hamza, was among those killed, said Capt. Mohamed Hussein, a senior Somali police officer. Hamza died when his hotel room collapsed Saturday because of the powerful car bomb which extremists used to blast their way into the Nasa-Hablod Hotel.

A biography on the York University website in Toronto said Hamza obtained a master of environmental studies at the school. Two media reports said Hamza lived in the Toronto-area with his family for a period of time. The office of Foreign Affairs Minister Stephane Dion could not immediately comment on Hamza’s Canadian ties.

At least 34 people were injured, according to police and hospital sources.

It’s the second attack on a hotel since the beginning of the Muslim holy month of Ramadan in early June. Both attacks have been claimed by al-Shabab.

The attacks have raised concerns about the security of hotels in the seaside capital which has seen numerous attacks by al-Shabab in recent years.

“The trend and lethality of such attacks suggest how vulnerable the security of hotels and the city in general are now,” said Mohamed Sheikh Abdi, a Somali political analyst.

“Many residents now shun going to hotels that provide some of the few sources of entertainment available in Mogadishu,” he said. At hotels, patrons smoke shisha (tobacco) in water pipes, enjoy dance music and play games such as dominoes and dice.

Mogadishu resident Ahmed Ali said that he has stopped going to hotels as they are seen as “death traps because they are favourite targets for al-Shabab … Having fun at hotels is good but my safety comes first.”