Some of Donald Trump's biggest critics are Mormons. Can they save America? 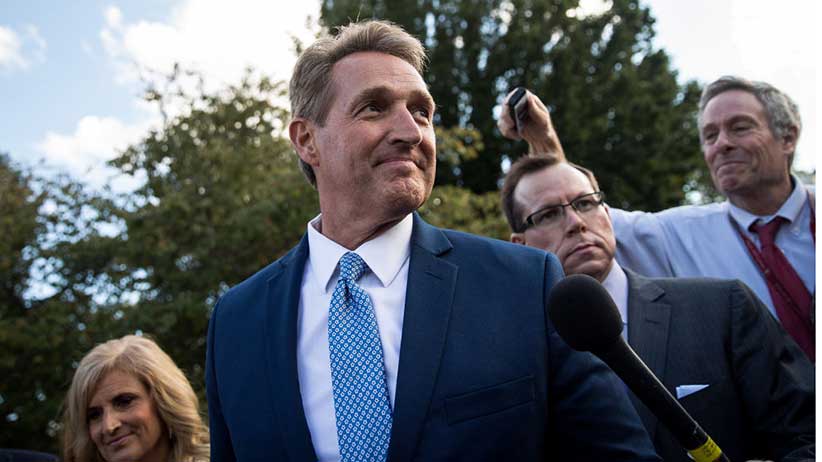 Sen. Jeff Flake (R-AZ) and his wife Cheryl Flake leave the U.S. Capitol as they are trailed by reporters, October 24, 2017 in Washington, DC. (Photo by Drew Angerer/Getty Images)

It may have been a moment unique in American history: A Senator, on the floor of the Senate, condemning his own President as a liar and comparing him to Stalin. That is exactly what happened yesterday, when Senator Jeff Flake of Arizona delivered a blistering speech on the importance of truth in the American political system.

The strange moment was yet another vignette illustrating the accelerating disarray of America’s two party political system. Every day brings new examples of this. Today it is the looming shut down of the U.S. government. A few days earlier it was the Supreme Court rejecting efforts to overturn partisan gerrymandering in Texas. Everywhere you look, the American political machinery seems to be teetering under the weight of its dysfunction.

This isn’t just the view of a prematurely cynical columnist. The Pew Research Center has been tracking the American public’s trust in the federal government since the 1950s. This has declined from a high of almost 80 per cent in the early 1960s, to a historic low of 20 per cent today. Real Clear Politics calculates Congressional job approval ratings are floating around 15 per cent. And, of course, Trump is less popular than any other modern President at this stage in their administration.

Voters are increasingly dismayed at partisan battles that long ago left policy ideas and ideological principles behind. If Republicans claim the sky is blue, the Democrats will say “No!” Then, the very next day, both will switch positions and do it again. Together, the parties have devolved into fundraising machines with the primary purpose of re-electing their incumbents. In fact, in some states, the only thing the two parties agree on are redistricting exercises to ensure that 90 per cent of congressmen or senators who seek re-election are successful.

Of the two parties, the Republicans are arguably (and ironically, given they control both houses, the Supreme Court, and the White House) in the worse shape. Ronald Reagan would not recognize the GOP today. International isolation, anti-free trade, anti-NATO, anti-immigrant—all policies they used to fight against. In many cases the party is taking a position explicitly because it is the opposite of what Obama did.

Meanwhile, public approval ratings are plummeting, moderate members are retiring, and even the Wall Street Journal is beginning to back away. In the background, relentless changes in the demographic landscape keep eroding the party’s base. And, every day the likelihood increases that a Russian time bomb will explode right in the centre of this administration.

A Republican party that collapses in on itself will be very bad for America. Some will argue this could be the necessary shock that would finally allow for a more democratic three party system. And, a prostrated GOP might give a Democratic administration time to codify into law all the previously sacrosanct political norms violated by Trump—and this could theoretically strengthen the republic. But I believe a rotted out GOP will only further disenchant an electorate that already has voter turnout rates near the very bottom of the OECD. A party collapse would humiliate and infuriate red America, drive an even bigger wedge between them and blue America, and might in a gun-soaked society, even turn the cold culture war hot. The stakes are high. America needs a strong Republican party.

Which brings me back to Jeff Flake. He recently published a book that tore apart the current Republican platform, arguing it was a betrayal of real conservative values. His speech on the floor of the Senate was just the latest in his increasingly audible barrages against Trump. He argues that the President’s “Reckless, outrageous and undignified behaviour” is a threat to American democracy.

His voice is joined by Evan McMullin, a former CIA officer and congressional staffer. He resigned from the GOP once Trump secured the nomination, and then ran against him in the Presidential race as an independent candidate. McMullin has remained one of the most out-spoken opponents of this administration and its policies.

Former Massachusetts governor and one-time presidential candidate Mitt Romney is also emerging as one of the President’s few Republican opponents. He delivered a blistering attack on Trump while he was still contesting the nomination, accusing him of running a “calculated” campaign of “racism, misogyny, bigotry, xenophobia, … and violence”. Romney is now expected to run for the Senate in Utah, a race he is almost guaranteed to win, further amplifying his opposition to Trump.

Another Republican voice of reason is Mia Love. She is black, a Haitian American congresswoman who has been on televisions everywhere recently decrying the President’s immigration views, and his overall tone.

These four are arguably the most outspoken and visible Republicans trying to pull the party back to its conservative center of gravity, and away from the bombast and cynicism of the President. And, perhaps not coincidentally, all four are Mormons.

The Church of Jesus Christ of Latter Day Saints is a deeply conservative faith, but also increasingly international and multicultural due to its missionary work abroad. There is a strong emphasis on personal morality, and on the absolute necessity to, as one hymn describes,  “Choose the right when a choice is placed before you.” And, the relatively well-educated, urban, and wealthy adherents are not as attached to the culture war narrative that motivates so many evangelical voters.

Correction: An earlier version of this article stated Senator Jeff Flake is from Utah. He is the junior United States Senator from Arizona.