Songs, prayer at first service at black church since shooting 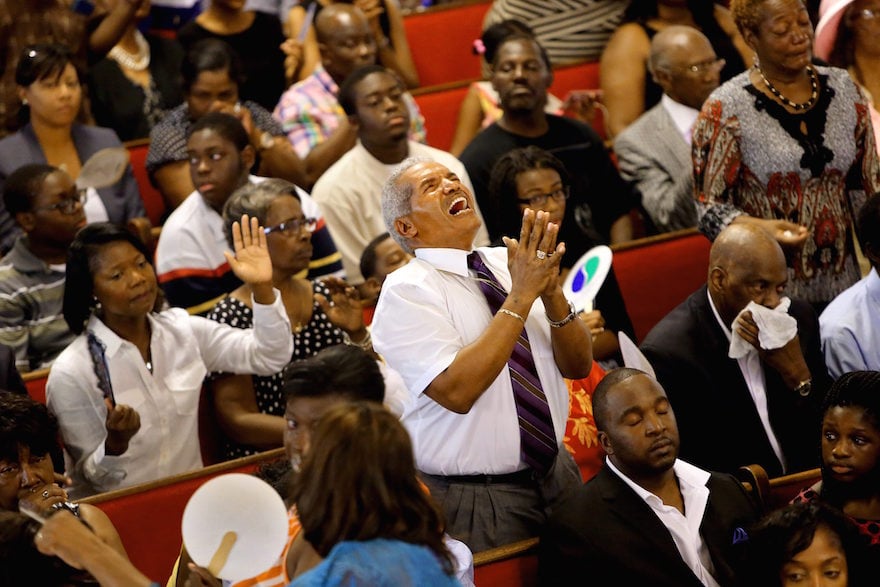 Jimmy Guyton participates in a worship service at Emanuel A.M.E. Church, Sunday, June 21, 2015, in Charleston, S.C., four days after a mass shooting at the church claimed the lives of its pastor and eight others. (Paul Zoeller/The Post And Courier via AP)

CHARLESTON, S.C. — The congregation at Emanuel African Methodist Episcopal swayed and sang and welcomed the world into their sanctuary Sunday, holding the first worship service since a gunman opened fire during a Bible study and killed nine church members.

Messages of love, recovery and healing were interspersed throughout the service, which was marked by fervent singing and shouting, so much so that many congregants waved small fans in front of their faces. Police officers stood watch over the worshippers at the church known as “Mother Emanuel” because it is one of the oldest black congregations in the South. For added security, police officers stood watch.

“It has been tough, it’s been rough, some of us have been downright angry, but through it all God has sustained us and has encouraged us. Let us not grow weary in well-doing,” said the Rev. Norvel Goff, a presiding elder of the 7th District AME Church in South Carolina.

Goff was appointed to lead the historic Charleston church after Emanuel’s senior pastor, the Rev. Clementa Pinckney, was shot and killed. A black sheet was draped over his usual chair, which sat empty Sunday. At least one parishioner kneeled down in front of it and prayed.

Pinckney was also a state senator and married father of two children. Goff acknowledged Father’s Day and reminded people that God was the ultimate father of these nine families.

“The blood of the ‘Mother Emmanuel 9’ requires us to work until not only justice in this case, but for those who are still living in the margin of life, those who are less fortunate than ourselves,” he said.

Sunday morning marked the first service at Emanuel since Dylann Roof, 21, sat among a Bible study group for about an hour Wednesday night before opening fire after saying that he targeted them because they were black, authorities said.

As Emanuel’s congregation belted out a gospel hymn, church bells rang throughout downtown in this “Holy City” — which garnered the nickname because of the numerous churches here. Later Sunday, people were expected to gather on the Arthur Ravenel Bridge to join hands in solidarity.

The bridge’s namesake is a former state lawmaker and a vocal the Confederate flag supporter. Photographs of Roof in a purported manifesto showed him holding Confederate flags and a burning American flag. It also contained hate-filled writings the author said was inspired in part by the killing of Trayvon Martin, an unarmed black teenager who was shot by neighbourhood watch volunteer George Zimmerman. Zimmerman was acquitted of murder, and the author of the manifesto said he was in the right.

Martin’s family said in a statement Sunday: “It is very unfortunate that an individual with such a vile mind and clear criminal intent would dare seek to undermine our mission of peace, in an attempt to destroy the legacy of our son.”

Around the country, pastors asked people to pray for Charleston and the tragedy resonated far beyond urban areas. Congregants at a small church in rural north-central Pennsylvania signed a condolence card to send to Emanuel. The Rev. Nancy Light Hardy of St. James United Church of Christ said she debated buying the card, which seemed “pitiful and lame” when set against the “inconceivable” killings.

“But at least it lets the Charleston church know that Christians across the country are thinking about them,” she said.

Despite grim circumstances Emanuel faced, the welcoming spirit Roof exploited before the shooting was still alive.

Gail Lincoln said she typically attends another AME church nearby, but felt compelled to visit Emanuel this week.

“Through all of this, God is still our refuge,” Lincoln said. “I’m still heartbroken but it’s gonna get better. I know it’s gonna take time, day by day.”

Goff said reopening the doors of Emanuel so soon after the shooting “sends a message to every demon in hell and on Earth.”