South Korea covered up the mass abuse and killing of 'vagrants' 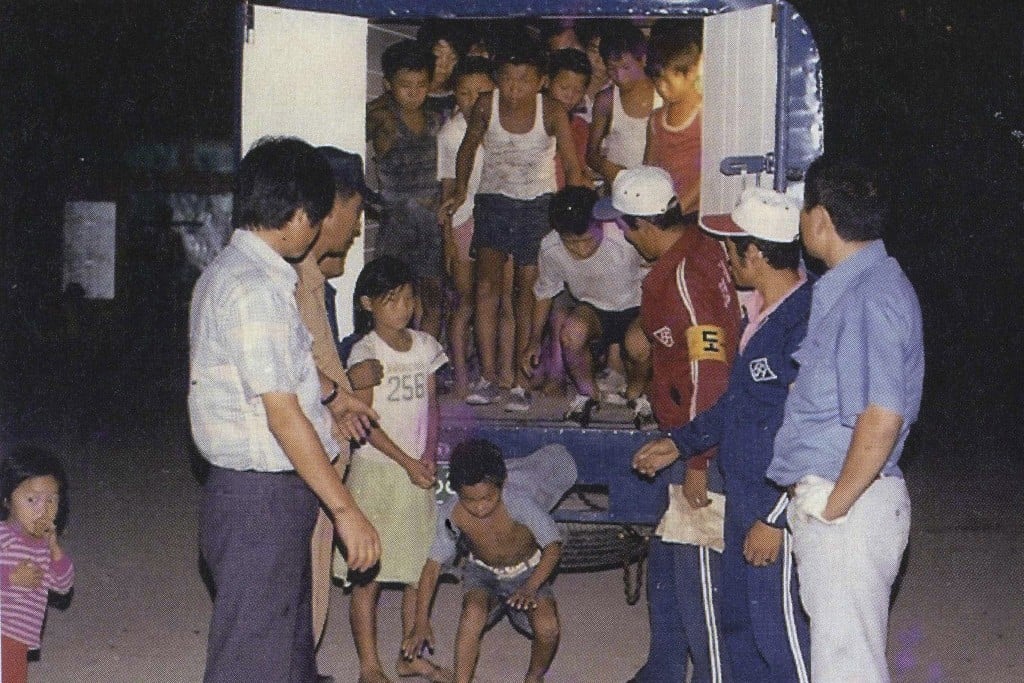 In this undated image provided by the Committee Against Institutionalizing Disabled Persons, a civic group representing the former inmates at the Brothers Home, guards unload children from a truck in Busan, South Korea. An Associated Press investigation shows that rapes and killings of children and the disabled three decades ago at a South Korean institution for so-called vagrants, the Brothers Home, were much more vicious and widespread than previously realized. It also reveals that the secrecy around Brothers has persisted for decades because of a cover-up orchestrated at the highest levels of government.(Committee Against Institutionalizing Disabled Persons via AP) MANDATORY CREDIT, NO SALES, NO ARCHIVE

BUSAN, Korea, Republic Of — Three decades ago, a policeman tortured Choi Seung-woo over a piece of bread he found in the boy’s schoolbag.

After being stripped and having a cigarette lighter repeatedly sparked near his genitals, the 14-year-old falsely confessed to stealing the bread. Two men with clubs came and dragged him off to the Brothers Home, a mountainside institution where some of the worst human rights atrocities in modern South Korean history took place.

Even now, Choi weeps as he speaks of what happened there.

A guard in Choi’s dormitory raped him that night in 1982, and the next, and the next. So began five hellish years of slave labour and near-daily assaults, years in which Choi saw men and women beaten to death, their bodies carted away like garbage.

Choi was one of thousands — the homeless, the drunk, the unlucky, but mostly children and the disabled — who were forced into facilities for so-called vagrants in the 1970s and ’80s. The roundup came as the ruling dictators prepared to bid for and host the 1988 Seoul Olympics, which they saw as international validation of South Korea’s arrival as a modern country. So they ordered police and local officials to “purify” the streets.

Today, nobody has been held accountable for the hundreds of deaths, rapes and beatings on the grounds of Brothers, the largest of dozens of facilities for those considered undesirable, according to an Associated Press investigation. The AP found that abuse at Brothers, previously almost unknown, was much more vicious and widespread than had been realized, based on hundreds of exclusive documents and dozens of interviews with officials and former inmates, most of whom had not spoken before publicly.

Secrecy around Brothers persists because of a coverup at the highest levels, the AP found. Two early attempts to investigate were suppressed by senior officials who went on to thrive in high-profile jobs; one remains a senior adviser to the current ruling party.

Products made using slave labour at Brothers were sent to Europe, Japan and possibly beyond, and the family that owned Brothers continued to run welfare facilities and schools until just two years ago.

The few former inmates speaking out want a new investigation. The government is blocking an opposition lawmaker’s push to revisit the case, contending that the evidence is too old.

Ahn Jeong-tae, an official from Seoul’s Ministry of the Interior, said Brothers’ victims should have submitted their case years ago to a temporary truth-finding commission. “We can’t make separate laws for every incident,” Ahn said.

The official silence means that even as South Korea prepares for its second Olympics, in 2018, thousands of traumatized former inmates have still received no compensation, let alone public recognition or an apology.

“The government has consistently tried to bury what happened. How do you fight that?” Choi asked. “Look at me now. I am wailing, desperate to tell our story. Please listen to us.”

Police officers, assisted by shop owners, rounded up children, panhandlers, small-time street merchants, the disabled and dissidents. They ended up as prisoners at 36 nationwide facilities, and numbered 16,000 by 1986, according to government documents obtained by AP.

Nearly 4,000 were at Brothers. Once an orphanage, Brothers Home at its peak had more than 20 factories behind its well-guarded walls in the southern port city of Busan, churning out goods made by mostly unpaid inmates.

Some 90 per cent of those shouldn’t have been there because they didn’t meet the government’s definition of “vagrant,” former prosecutor Kim Yong Won told the AP, based on Brothers’ records and interviews compiled in 1987 before government officials ended his investigation.

A former inmate, Lee Chae-sik, said he watched the man he worked for, chief enforcer Kim Kwang-seok, lead near-daily, often fatal beatings at a “corrections room.” Lee said he also saw records that sometimes listed as many as five daily deaths. The AP tried repeatedly to track Kim down but could not.

Amid the violence was a massive money-making operation partly based on slave labour. Eleven of the factories, ostensibly meant to train inmates for future jobs, saw a profit by the end of 1986, according to Busan city government documents obtained exclusively by the AP.

The documents show that Brothers should have paid the current equivalent of $1.7 million to more than 1,000 inmates for their dawn-to-dusk work over an unspecified period. However, facility records and interviews with inmates at the time suggest that most people at Brothers were subjected to forced labour without pay, according to prosecutor Kim.

In his autobiography and elsewhere, Brothers’ owner, Park In-keun, has denied wrongdoing, saying he simply followed government orders. Repeated attempts to contact him through family, friends and activists were unsuccessful.

The former second-highest management official at Brothers, Lim Young-soon, attributed the facility’s high death toll to the many inmates he said arrived there in poor health.

“These were people who would have died in the streets anyway,” Lim told AP in a phone interview.

On his second day at Brothers, Choi said he watched a guard drag a woman by her hair and beat her with a club until blood flowed.

Death tallies compiled by the facility claimed 513 people died between 1975 and 1986; the real toll was almost certainly higher. Most of the new arrivals at Brothers were in relatively good health, government documents show. Yet at least 15 inmates were dead within just a month of arrival in 1985, and 22 in 1986.

While pheasant hunting, Kim, then a newly appointed prosecutor in the city of Ulsan, stumbled upon bedraggled prisoners working on a mountainside. Their guards said they were building a ranch for the owner of the Brothers Home in nearby Busan.

Kim and 10 policemen raided Brothers in January 1987. But at every turn in his investigation, Kim said, high-ranking officials blocked him, in part out of fear of embarrassing pre-Olympics news. Internal prosecution records reveal intense pressure from the president’s office for Kim to curb his probe and push for lighter punishment for the owner.

Kim’s boss, Park Hee-tae, then Busan’s head prosecutor and later the nation’s justice minister, pushed to reduce the scope of the investigation, Kim said, including forcing him to stop efforts to interview every Brothers inmate. Park, a senior adviser to the current ruling party, denied AP interview requests. His personal secretary said Park can’t remember details about the investigation.

Kim, now 61 and a managing partner at a Seoul law firm, said his bosses also prevented him from charging the owner for suspected widespread abuse at the main compound, limiting him to pursuing much narrower abuse linked to the construction site he’d found.

Despite interference, Kim eventually collected bank records and financial transactions indicating that, in 1985 and 1986 alone, the owner embezzled millions from government subsidies. The Supreme Court in 1989 gave Park 2 1/2 years in prison for embezzlement and violations of construction, grassland management and foreign currency laws.

Brothers finally closed its gates in 1988.

While most former inmates are silent, a few are demanding an apology and an admission that officials encouraged police to kidnap and lock away people who shouldn’t have been confined.

“How can we ever forget the pain from the beatings, the dead bodies, the backbreaking labour, the fear … all the bad memories,” said Lee, who now manages a lakeside motel. “It will haunt us until we die.”