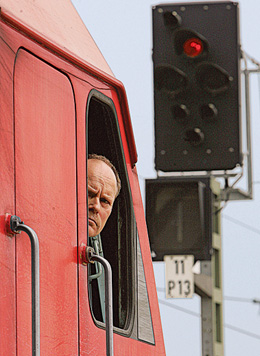 Lately, German businesses seem to have developed a worrying fondness for spying on their workers—and the latest case is truly shocking. Last week Wolfgang Schaupensteiner, the anti-corruption officer at Germany’s state-owned railway, stunned a parliamentary committee when he admitted that Deutsche Bahn had spied on 173,000 employees, more than 70 per cent of its workforce.

The operation, codenamed “Babylon,” looked for improprieties and possible corruption in 2002 and 2003 by comparing workers’ personal information with data on firms that did business with the railway. Though Deutsche Bahn spokesman Oliver Schumacher said the firm had done “nothing wrong” and even denied that the railway’s actions could be called spying, there were immediate calls for the government to investigate whether it broke privacy laws.

Originally, Deutsche Bahn said investigators looked into just 43 cases of surveillance, which hadn’t used internal railway data. More recently there were revelations in Stern magazine that the railway had investigated 1,000 executives and their spouses earlier this decade in a corruption hunt. Now there are allegations that Deutsche Bahn handed over private data on a massive scale, prompting outrage from Peter Schaar, the federal data protection commissioner, who said it was “complete nonsense when every single conductor falls under general suspicion.”

The railway scandal is just the latest to envelop Germany’s businesses. Last May, Deutsche Telekom acknowledged “the illegal use of communications data” in a spying operation. It also allegedly had former East German secret policemen snoop on journalists, while Lufthansa trolled through flight information in a similar scheme.

Meanwhile, as unions demand a full accounting at the railway, speculation is building that CEO Hartmut Mehdorn will be kicked to the curb. It would be an ignominious end for a politically connected boss who once boasted that “no one can touch me.”