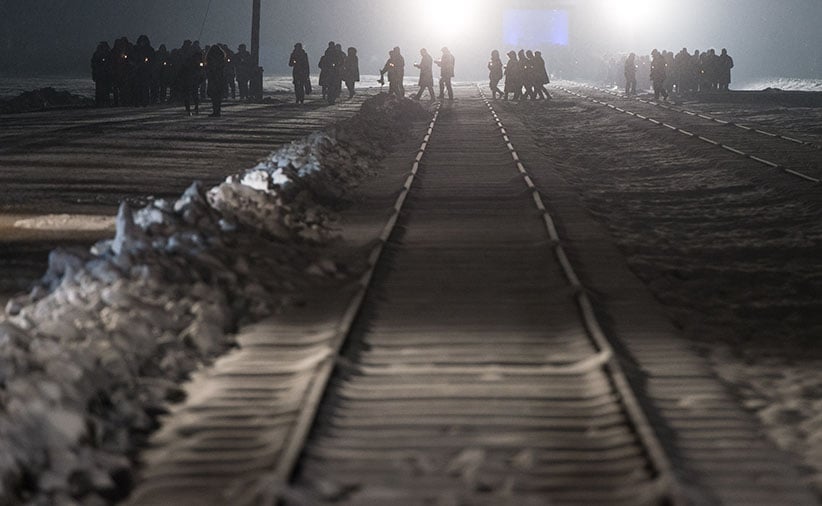 LUENEBURG, Germany – A 93-year-old former Auschwitz guard went on trial Tuesday accused of 300,000 counts of accessory to murder, in a case that will test the argument that anyone who served as a guard at a Nazi death camp was complicit in what happened there.

Oskar Groening is alleged to have served at Auschwitz between May and June 1944, when some 425,000 Jews from Hungary were brought there and at least 300,000 almost immediately gassed to death.

Prosecutors say that he helped collect and tally money as part of his job dealing with the belongings stolen from camp victims, earning him the moniker “Accountant of Auschwitz.”

Groening doesn’t deny serving as a guard there, but says he committed no crime. As he arrived at the back entrance of the court in the town of Lueneburg, south of Hamburg, Groening told reporters that he expects an acquittal. He faces a maximum sentence of 15 years if found guilty.

Groening’s trial is the first to test a new line of German legal reasoning that has unleashed an 11th-hour wave of new investigations of Nazi war crimes suspects. Prosecutors argue that anyone who was a death camp guard can be charged as an accessory to murders committed there, even without evidence of involvement in a specific death.

“He helped the Nazi regime benefit economically,” the indictment said, “and supported the systematic killings.”

There are currently 11 open investigations against former Auschwitz guards, and charges have been filed in three of those cases including Groening’s. A further eight former Majdanek guards are also under investigation.

About 60 Holocaust survivors or their relatives from the U.S., Canada, Israel and elsewhere have joined the prosecution as co-plaintiffs, as is allowed under German law.

Eva Pusztai-Fahidi, an Auschwitz survivor and co-plaintiff who is also expected to testify, told reporters ahead of the trial that even 70 years after the end of the war, it is never too late to try to seek justice.

“We’ve been waiting for this trial for a long time,” she said.

Among those queuing to enter the court were several known neo-Nazis, as well as anti-Nazi activists who held up a banner that read: “Solidarity with the victims of the Nazi era.”