By Jim Salter And Summer Ballentine, The Associated Press September 16, 2017 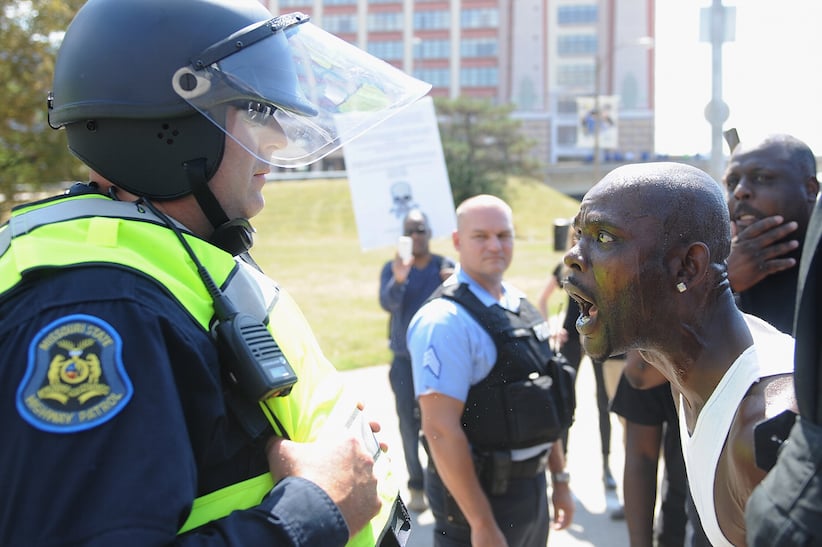 A man yells at a law enforcement officer during a protest action following a not guilty verdict on September 15, 2017 in St. Louis, Missouri. Protests erupted today following the acquittal of former St. Louis police officer Jason Stockley, who was charged with first-degree murder last year in the shooting death of motorist Anthony Lamar Smith in 2011. (Photo by Michael B. Thomas/Getty Images)

ST. LOUIS — Noisy demonstrators marched through an upscale shopping mall Saturday to protest the acquittal of a white former St. Louis police officer in the fatal shooting of a black man, pickup up after a night of mostly peaceful demonstrations that escalated into scattered acts of vandalism and violence.

A few hundred people walked through West County Center in Des Peres loudly chanting slogans such as “black lives matter” and “it is our duty to fight for our freedom” to decry the judge’s verdict Friday clearing ex-St. Louis police officer Jason Stockley of first-degree murder in the 2011 shooting death of Anthony Lamar Smith.

Susanna Prins, 27, of University City, showed up at a meeting to plan the action carrying a sign stating, “White silence is violence.”

“I feel helpless and I feel just rage,” Prins said. “Not saying or doing anything makes you complicit in the brutalization of our friends and neighbours.”

Smith’s death is just one of several high-profile U.S. cases in recent years in which a white officer killed a black suspect, including the 2014 killing of Michael Brown in nearby Ferguson that sparked months of angry and sometimes violent protests.

Republican Gov. Eric Greitens was highly critical during his 2016 campaign of how former Democratic Gov. Jay Nixon managed the Ferguson protests, suggesting that with the right presence and leadership there could have been peace by the second night.

In advance of the Stockley verdict, Greitens met with Smith’s fiancee, black state lawmakers, black St. Louis faith leaders and law enforcement in the hopes of projecting a shared message that peaceful protest would be tolerated but violence wouldn’t.

Before the verdict, Greitens put the National Guard on standby, and some troops were deployed Friday night to guard fire stations and other “critical infrastructure” that Greitens didn’t specify. He was in St. Louis Friday night and met with local law enforcement officials.

Police erected barricades around their own headquarters and the courthouse and dozens of officers in flak jackets and helmets who wielded batons and shields corralled demonstrators throughout the day and evening.

Demonstrators occasionally lobbed objects into the fortified line of officers, who used pepper spray to repel the crowd.

Tensions flared several times, including when protesters blocked a bus full of riot officers, damaged a police cruiser with rocks and later broke a window and spattered red paint on the home of Mayor Lyda Krewson.

After a tense standoff at the mayor’s home, police used tear gas to clear the area.

Police said they made nearly two-dozen arrests before dark and more in the evening, though they still hadn’t provided an updated figure more than 12 hours later.

Police reported that 10 officers suffered injuries by the end of the night, including a broken jaw and dislocated shoulder, and some journalists reported being having equipment damaged and being threatened by protesters.

RELATED: How activism has evolved for Black Canadians

Anticipating more demonstrations Saturday, the band U2 cancelled its evening concert in St. Louis because the police department said it wouldn’t be able to provide its standard protection for the event, organizers said.

The civil disobedience followed the acquittal of Stockley for fatally shooting Smith after the suspected drug dealer crashed his car after leading the officer in a chase.

Stockley testified that he saw the 24-year-old holding a silver revolver as he sped away and felt he was in imminent danger as he was approaching the vehicle later.

Prosecutors said Stockley planted a gun in Smith’s car after the shooting — Stockley’s DNA was on the weapon but Smith’s wasn’t. Dashcam video from Stockley’s cruiser captured him saying he was “going to kill this (expletive), don’t you know it.” Less than a minute later, he shot Smith five times.

Stockley’s lawyer dismissed the comment as “human emotions” uttered during a dangerous pursuit and the judge said it could be ambiguous.

In an interview with the St. Louis Post-Dispatch after the verdict, Stockley, 36, said he understands how video of the shooting looks bad, but that he did nothing wrong.

“I can feel for and I understand what the family is going through, and I know everyone wants someone to blame, but I’m just not the guy,” said Stockley, who left St. Louis’ police force in 2013 and moved to Houston.