The coffee juggernaut plans to open a café in Montmartre, to the dismay of locals 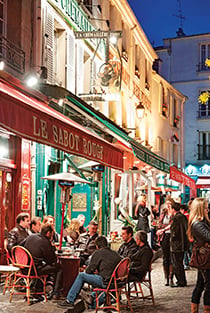 Earlier this month, Starbucks announced plans to open a café on the old stomping grounds of Ernest Hemingway and Pablo Picasso in the storied Parisian neighbourhood of Montmartre. In response, the association Paris Fierté (Paris Pride) is circulating a petition and planning to protest its arrival. “Opinion,” the association says, “oscillates between anger and fatalism.”

Paris Fierté spokesperson Pierre Brabant warns that Starbucks’ attempt to breach Montmartre could be “the drop of coffee that makes the vase overflow.” The global giant opened its first French branch in 2004. But there are just 81 Starbucks in France, compared with more than 1,000 in Canada, and France’s Starbucks have yet to turn a profit.

In response, Starbucks has changed tactics—offering croque monsieur and pain perdu alongside its blueberry-studded jumbo muffins.

Laurent Pauzié, a young engineer in Paris, believes the Starbucks outlets “are only here to comfort tourists when they’re lost.” Kate Menzies, a Canadian living in Paris, is more accommodating. Starbucks, she says, “is one of the few places with public toilets and free WiFi in the city.”