Strikes, attacks over demands for new elections in Bangladesh

Since Jan. 5 at least 28 people have been killed and nearly 700 vehicles have been smashed or torched 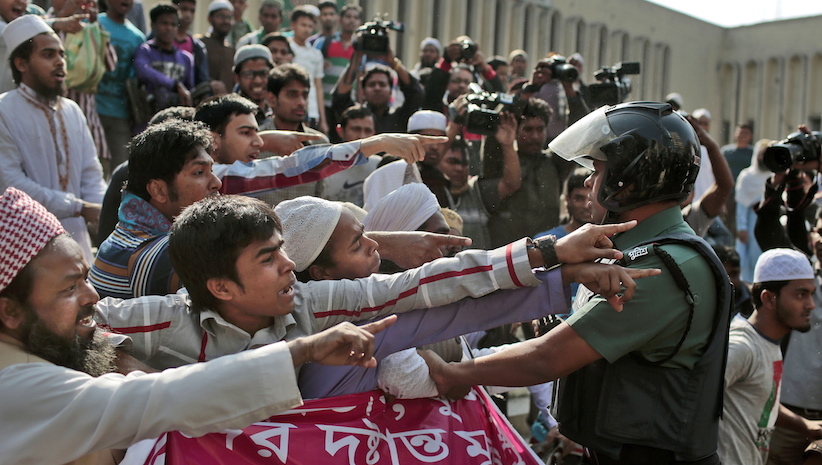 DHAKA, Bangladesh – A 2 1/2-year-old victim of a homemade bomb lies in an intensive care unit with burns to his face, head and other body parts. In another hospital, 17 people, including students and a teacher, are being treated for similar injuries. Another victim, a schoolboy, lost both his eyes.

That is just part of the toll from more than two weeks of attacks sparked by the latest clash between Bangladesh’s two main, long-feuding political factions. Since Jan. 5 – the one-year anniversary of the last election – at least 28 people have been killed, nearly 700 vehicles have been smashed or torched and much of the country’s transportation system has been at a standstill.

Supporters of former Prime Minister Khaleda Zia, who boycotted the last vote, demand that the government resign and hold new elections immediately, but Prime Minister Sheikh Hasina says her government will remain in office until her term ends in 2019.

The violence ended a year of relative calm and has raised fears it may escalate as it did in 2013, when political violence left nearly 300 people dead.

“It’s a terrible situation we are in. We are terrified,” said Abu Bakar Siddique, a businessman. “My kids’ schools are closed, I am afraid of going outside … pictures of burned bodies in newspapers. All very disturbing.”

Both sides had planned rallies on the Jan. 5 election anniversary; police ended up banning all rallies but Zia vowed to protest, anyway.

The opposition said authorities have locked Zia in her office since Jan. 5, when she attempted to visit her party headquarters, where her alliance’s rally was to be held. Zia then announced a nonstop transportation blockade across the country until the government steps down. There have also been general strikes and violence including arson against buildings and vehicles and drive-by attacks by unidentified assailants.

Authorities say Zia can go home anytime, but cannot move anywhere else unless she asks her supporters to shun violence. The opposition blames the government for some of the violence, including the shooting of an adviser to Zia last week. The government denies involvement but says it will investigate.

On Tuesday, Hasina reiterated, in a speech in Parliament, that she will not step down. She asked security officials to take a tougher stand against the violence and said Zia would be tried if it continued. A Cabinet member said the government is thinking about issuing “shoot-at-sight” orders against arsonists.

On Wednesday, the Zia-led alliance enforced a general strike in central Bangladesh and a southwestern region to protest, and it vowed to continue the transportation blockade nonstop across the country.

About 5,000 opposition leaders and activists have been arrested over last 16 days across the country, according to a figure provided by the Police Headquarters in Dhaka. Zia’s alliance says that is an attempt to silence them, but authorities allege those detained are responsible for violence and sabotage.

Western diplomats, the United States and the United Nations have urged all sides to shun violence and peacefully resolve disputes.

Iftekher Zaman, who heads the Bangladesh chapter of Berlin-based Transparency International, said in a statement that the violence “is not only undermining prospects of democracy and governance, but also causing extreme forms of damage to democratic institutions.”

“Having locked themselves in a zero-sum game of power, our political parties and leaders are not only exposing their political bankruptcy, but also expanding their distance from the people and public interest on a daily basis,” Zaman said.

“This violence must stop, and people must feel safe,” analyst and journalist Hassan Shahriar said. “All parties should have to initiate a dialogue what they actually want and how.”

Shahriar said interest groups may take advantage of the ongoing chaos in a country where Islamist extremism could bloom and the military has at times seized power.

“So the two major political parties that claim to be democratic should act properly. The onus is on the government to initiate a process for peace and dialogue. Otherwise the situation would just worsen,” he said.

One stumbling block has been the Jamaat-e-Islami party, the main partner of Zia’s Bangladesh Nationalist Party-led alliance.

Jamaat-e-Islami campaigned against the creation of Bangladesh in 1971. Aided by India, Bangladesh became independent in 1971 through a bloody nine-month war led by Hasina’s father, independence leader Sheikh Mujibur Rahman.

Jamaat-e-Islami campaigned violently after Hasina in 2010 initiated a long-stalled process of trying suspected war criminals within the party for their role in killings, arson and rapes in 1971. Eight senior leaders, including Jamaat-e-Islami chief Motiur Rahman Nizami, have since been convicted, and one has been hanged.

Hasina has said the trials will continue and has often criticized Zia, accusing her of siding with Jamaat-e-Islami. The ruling party’s leaders often say Zia could get a chance for dialogue if she drops Jamaat-e-Islami party from her alliance.

Zia boycotted last year’s vote after Hasina refused to heed opposition demands to step down and appoint a neutral administration to hold the election.

Zia was prime minister from 2001 to 2006, but failed to hand over power peacefully. A military-backed caretaker government then ruled the country for two years before Hasina came to power with a landslide election win in 2008.