Syrian refugees, by the numbers—or in this case, human lives

The hard math around Canada's plan to resettle 25,000 refugees can sound clinical. But the numbers tell an emotional human story. A report from Lebanon

JNAH, LEBANON — For three months now, Canadians have received a crash course on the complexities of refugee resettlement. That’s what happens when a bureaucratic process, in existence for years but largely ignored, is suddenly front-page news. People want to know how the system works. Every tentacle. Immediately.

That spotlight will shine even brighter in the weeks to come, as Syrian refugees actually begin to arrive in Canada en masse. Some of the lucky 25,000 have already touched down, filling seats on commercial airliners beside the travelling general public. Soon enough (exact date to be determined), charter jets will begin transporting them by the planeload from the operation’s central hub in Jordan.

Repeat the same figure often enough—25,000—and it all sounds so clinical, as if real human beings aren’t involved. But refugee resettlement is very much a numbers game (subtraction, more specifically) and to fully understand what’s about to unfold requires a basic grasp of the underlying statistics. The processing system—Who gets in? Who doesn’t? How are these people screened?—flows from those figures.

It can be an overwhelming math lesson.

At this moment, the world is home to 19.5 million refugees uprooted by conflict, fear or persecution. Close to 40 million others are displaced within their own countries, for a total of 59.5 million—the highest amount ever recorded. In other words, one of every 122 people on Earth is either a refugee, internally displaced or seeking asylum. If that were the population of a country, it would be the world’s 24th largest.

Of those 19.5 million, the United Nations Refugee Agency (UNHCR) has identified 1.15 million, about five per cent, in immediate need of resettlement. Living amongst an already desperate population, these cases are considered the most vulnerable of the vulnerable: victims of torture, the sick or physically disabled, single mothers with multiple children.

A consortium of 30 countries, Canada included, works to resettle some of these refugees, but their combined efforts make the tiniest dent at best. In 2014, barely 73,000 refugees from around the world were resettled: just six per cent of those identified as vulnerable, and only 0.004 per cent of the world’s total refugee population. The United States welcomed the most (48,911), while Canada was second on the list, bringing in 7,573 government-assisted refugees. (The UNHCR total does not included privately sponsored refugees. More on that later.)

The stats on Syria? As the civil war rages into its fifth year, the battered country is now the world’s top source for refugees, surpassing longtime leaders Afghanistan, Somalia and Sudan. More than four million Syrians are registered with UNHCR, mostly in neighbouring countries Turkey (2.2 million), Lebanon (1.1 million) and Jordan (almost 700,000). Against that massive backdrop, Ottawa’s pledge to resettle 25,000 may not seem like a whole lot. But it is—at least for those very lucky few.

“It’s like a dream come true for some people,” says Dana Sleiman, a UNHCR spokeswoman based in Lebanon. “It’s important to highlight that this really makes a difference in the lives of 25,000 individuals who have stories, who have dreams, who have aspirations, and who have needs that they are not able to address in this part of the world.”

Sleiman is standing inside a registration centre in this Beirut neighbourhood, one of four UNHCR facilities spread throughout Lebanon. Behind her, dozens of Syrian refugees—men, women and children—sit on long, black benches, waiting for their turn to speak to a representative working behind one of seven glass windows. The refugees have come here for many different reasons: To register newborn babies. To inquire about food vouchers. To ask about potential resettlement. 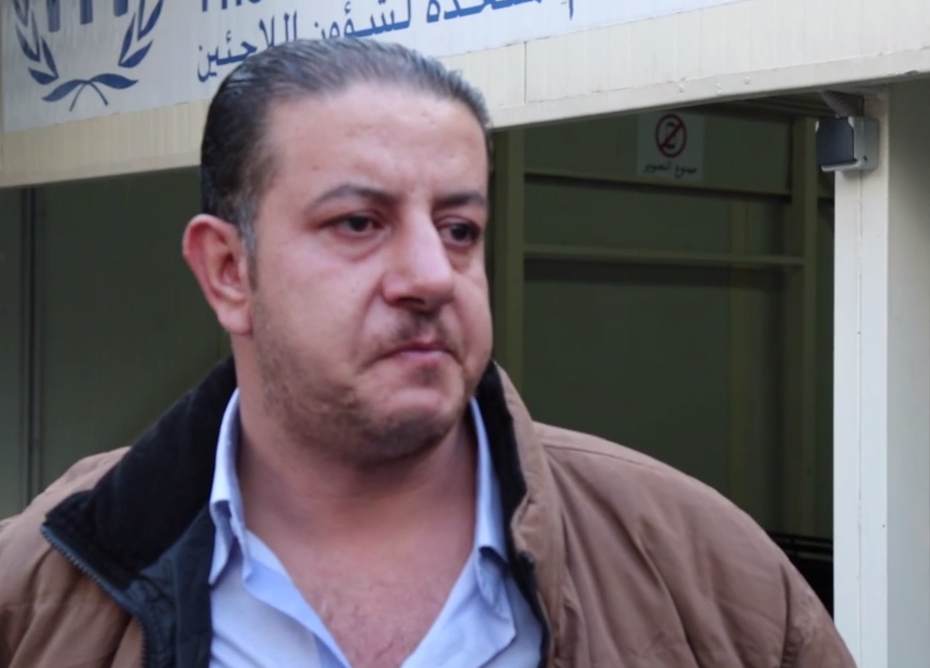 Ahmed Nanoue, from the Syrian city of Idlib, is carrying a brown envelope full of X-rays. He says his seven-year-old daughter suffers from brain trauma, and that he can’t afford the necessary treatment. “I am here because of my little daughter,” he says in Arabic. “She is sick. She has a disease in her brain and she needs health care.” His family of six shares a single hotel room in the coastal city of Jbeil, 40 km to the north.

Asked if he would accept an invitation to move his family to Canada, his eyes begin to water. “I would thank them so much, not for me, just for my children,” he says. “I don’t want anything. I just want my daughter to be fine.”

Mostafa Boulad, also from Idlib, is equally desperate. His 12-year-old son, he says, can barely see out of either eye. (He holds a piece of paper up to his nose to demonstrate his boy’s limited vision.) Boulad has heard about Canada’s plan to welcome 25,000 refugees. “I will go anywhere if they make surgery for my son,” he says. “I wish, I wish. I can’t express myself.”

More math: Of the 25,000 Syrian refugees slated to come to Canada, 10,000 are expected to arrive before the end of the year, with the remaining 15,000 by the end of February. The bulk of the first arrivals—approximately 8,000—will be privately sponsored; in most cases, these refugees have relatives in Canada who connected them with private groups willing to cover the hefty sponsorship costs (up to $40,000, in some cases). For the most part, the remaining 17,000 will be government-assisted refugees, those recommended by UNHCR because they meet the most vulnerable criteria. Under this stream, taxpayers cover the first year of living expenses. 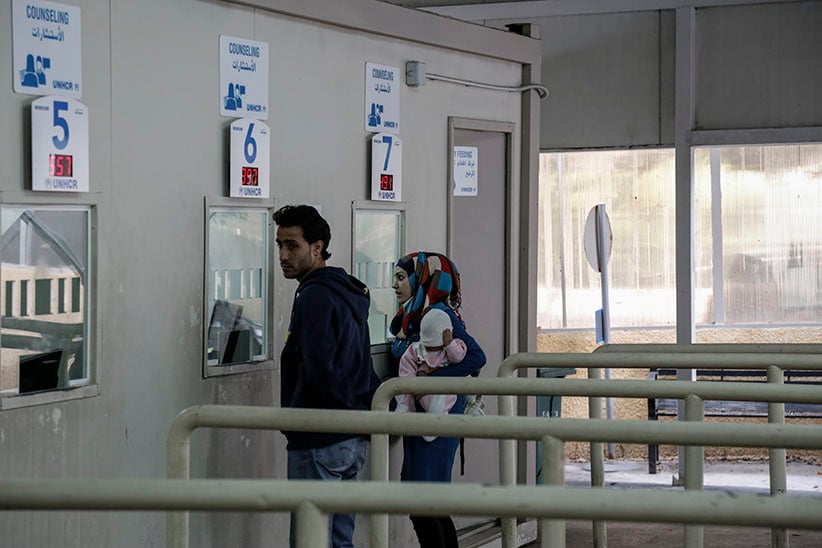 Syrian refugees wait to at a UNHCR reception center in Beirut, Lebanon, on Dec 2, 2015. Here refugees are able to access a range of information and services from UNHCR, including resettlement to foreign countries. (Photograph by Sam Tarling)

As unbelievable as it may sound, not everyone wants to relocate to Canada. Even for a refugee struggling to survive, the prospect of crossing an ocean is no easy decision, especially if that person holds out the slimmest hope of one day returning to Syria. In a briefing to reporters this week, government officials revealed that UNHCR attempted to contact more than 41,000 Syrian refugees in November, to gauge their interest in resettling in Canada. Only 28,560 of those people had active cellphones, and of the 3,049 who did come in for an interview, barely 1,800 said they wanted to move on such short notice.

John McCallum, the minister of immigration, refugees and citizenship, insists the Trudeau government will have no trouble filling the slots, despite the initial refusals. He’s absolutely correct. A glance around this noisy registration centre reveals no shortage of possible candidates. “Refugees are starting to lose hope on this side of the world,” Sleiman says. “They are eager for any glimpse of hope out there.”

Watch: Canada’s ambassador to Lebanon on ‘Canadian values in action’

If anything, she says, finding enough files to recommend to Canadian officials won’t be the problem. There are plenty. The real challenge, as always, will be to distinguish the heartbreaking from the utterly heartbreaking. “It’s a huge decision,” she says. “You’re deciding whether this person or that person—both of whom are extremely vulnerable—will have a chance to go abroad. It is a very difficult choice that our resettlement staff has to make every single day.”

At least one person at this centre has received the news so many would cherish. Zakaria al Zadid, once a barber in Aleppo, says his family (himself, his wife and their three young children) was recommended for resettlement. After a recent interview with a Canadian visa officer—and after passing all the requisite medical exams and security checks—they were approved. “My dream is that my children have their education, that they go to university,” says Zadid, wearing a green golf shirt. “And I want to join a class where I can learn to cut hair properly, and then I will open my own small barbershop.”

Zadid has his own questions for the visiting reporter from Canada. After the terrorist attacks in Paris, he heard rumours that the Prime Minister had changed his mind about welcoming Syrian refugees. “I’m worried,” he says. “I don’t believe we’re going to Canada until the last minute when I get my tickets.”

The reporter explains that the government has not scrapped its plan, but rather stretched out the processing, from six weeks to three months. Although he appears to understand, Zadid looks no less nervous. “I wish today was the day they take me and my children,” he says. “I don’t care about anything. I just want to go there.”

Amid so many numbers, some things simply can’t be quantified.