Russia says it is not planning more 'humanitarian pauses' in the fighting in the city's eastern, rebel-held districts 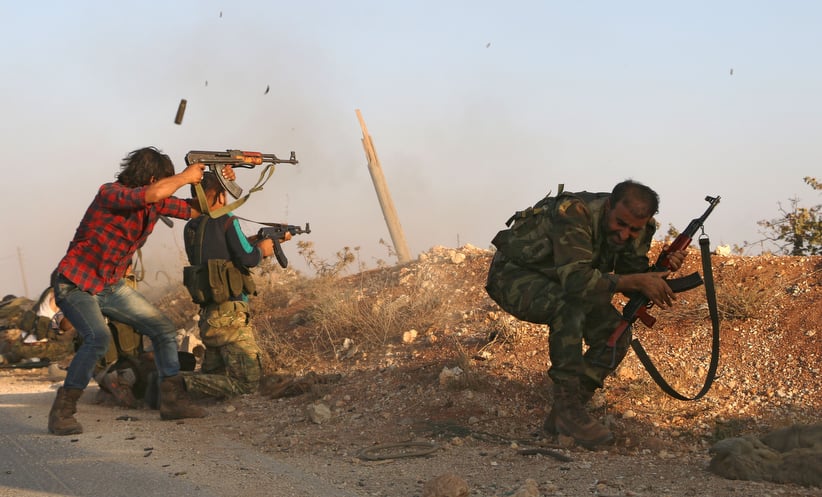 Fighters from the Free Syrian Army take part in a battle against the Islamic State (IS) group jihadists in the northern Syrian village of Yahmoul in the Marj Dabiq area north of the embattled city of Aleppo on October 10, 2016. (Nazeer al-Khatib/AFP/Getty Images)

BEIRUT — Syrian government forces and their allies on Monday captured strategic high ground in embattled Aleppo as Russia — a key ally of Syrian President Bashar Assad — said it was not planning more “humanitarian pauses” in the fighting in the city’s eastern, rebel-held districts.

The fighting in Aleppo came as airstrikes hit towns in the northwestern province of Idlib, killing at least 13 people, according to the Britain-based Syrian Observatory for Human Rights and the Local Coordination Committees. They said the people killed were in the towns of Kfar Takharim and Khan Sheikhoun, where a market was hit.

Fighting resumed in Aleppo over the weekend, following a days-long lull announced by Moscow that was meant to allow rebels and civilians to leave the eastern districts. The rebels rejected the Russian offer and none of the civilians left.

Government troops launched a fresh offensive and on Monday took the hilltop of Bazo on the southern edge of Aleppo, near military bases, and shelled the rebel neighbourhoods, according to opposition activists.

The Britain-based Syrian Observatory for Human Rights said Bazo was taken amid heavy bombardment. Both the Observatory and the Aleppo Media Center, an activist collective, reported government shelling in eastern parts of the city.

A pro-opposition media outlet circulated footage of a powerful and hard-line Islamist rebel coalition known as Jaish al-Fatah announcing that the campaign to break the government’s siege of the city’s east would begin “within hours.”

Syrian troops have besieged rebel-held parts of Aleppo for weeks, subjecting the districts to some of the worst air raids since a cease-fire brokered by the United States and Russia collapsed on Sept. 19. Opposition activists say more than 600 people have been killed in Aleppo and neighbouring villages since then.

Jaish al-Fatah commander Ali Abu Odai al-Aloush told the Qasioun News Agency that “zero hour has drawn near,” and that his militants had begun moving toward Aleppo. It was unclear when the interview was recorded.

A spokesman for the Nour el-Din al-Zinki rebel faction in Aleppo said an operation to break the government’s siege of the rebel-held eastern districts of Aleppo was “coming.”

The spokesman, Yasser al-Yousef, said the rebels would not intentionally target civilians in Aleppo’s government-held districts, but warned of collateral damage from the anticipated operations.

“In order to resume it, our opponents need to make sure the anti-government groups behave properly,” he said in comments carried by Russian news agencies, blaming the rebels for the fact that medical evacuations from eastern Aleppo, planned during the pause, were scrapped at the last moment.

“What needed to happen didn’t happen … that’s why resuming a humanitarian pause is not on the agenda,” Ryabkov said. He also said that Moscow doesn’t expect any new round of Syria peace talks in the Swiss city of Lausanne until after the U.S. elections.

French Foreign Minister Jean-Marc Ayrault called for an end of the “massive bombing raids” by Russia and Syrian government forces in Aleppo to allow for the delivery of aid to beleaguered populations and the resumption of peace efforts in Syria.

Speaking during a joint news conference with his Turkish counterpart in Ankara Monday, Ayrault said: “it’s the only way that humanitarian aid can reach populations that really need it; it’s the only that that the negotiations can resume.”

Ayrault also said that there cannot be a “lasting peace” in Syria “outside of a political solution.”