Syria's once-promising revolution lurches toward a horrific end in Idlib

Terry Glavin: The tragic pattern of Russian barbarism, American duplicity and the Assad regime's murderous cruelty is playing out once more—and no one is willing to stop it 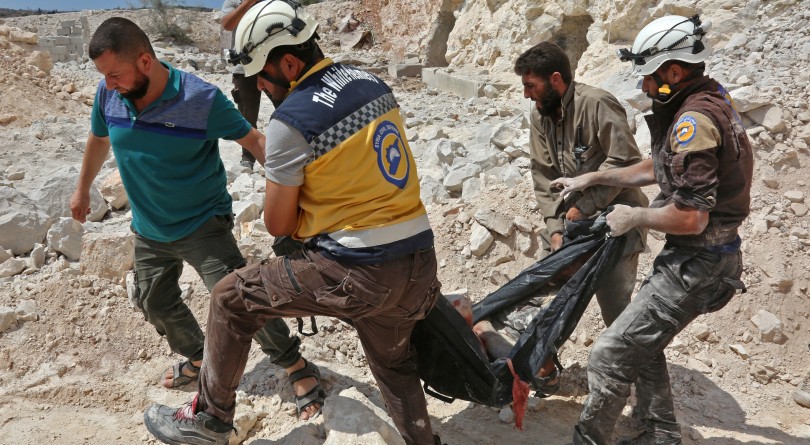 Members of the Syrian Civil Defence, also known as the "White Helmets", carry a victim after airstrikes in the southern part of Idlib province. (ANAS AL-DYAB/AFP/Getty Images)

A “perfect storm” of chaos and atrocity is the way UN Syrian envoy Staffan de Mistura describes what he sees hovering over at least three million Syrian civilians bottled up in the killing zone of Idlib, the last major pocket of resistance to Bashar Assad’s criminal regime in Damascus. “Syria is once again at the edge of an abyss,” Francois Delattre, the French ambassador to the United Nations, warned last week.

Since last Friday, the Syrian Observatory for Human Rights has counted 1,060 Russian air attacks and bombings by regime forces in what is shaping up to be the final drama of a so-called “de-escalation” strategy that Vladimir Putin never intended to be anything of the kind in the first place, and quite possibly the dying gasps of the brave Syrian revolution that erupted peacefully in the Arab Spring of 2011. “We are preparing for the worst,” Farouq Habib, spokesman for the Syrian Civil Defence “White Helmets” organization, told me the other day.

Just how the people of Idlib ended up stranded in a human charnel house is a story of Bashar Assad’s savagery, Russian and Iranian barbarism, and American duplicity going back to Barack Obama’s surrender of his 2012 “red line” on the Syrian regime’s use of chemical weapons. The indifference of the NATO capitals is central to it. So is the abject uselessness of the United Nations.

After thousands of innocents were slaughtered when Putin’s air force bombed rebel-held Aleppo into submission in December 2016, Turkish president Recep Erdogan noticed the writing on the wall. The Syrian revolution was dead, so Erdogan signed on to tripartite accord with Russia and Iran at a May 2017 summit in Astana, Kazakhstan. The Astan accord was supposed to serve as an alternative to the dead-end UN peace talks charade in Geneva. The deal was also supposed to form the basis of a comprehensive Syria-wide ceasefire.

RELATED: Rescuing Syria’s ‘White Helmets’ was the least the world could do

Instead, Russia, Iran and the Assad regime have employed the Astana arrangement as a crude strategy for the management of war crimes and crimes against humanity.

Each of the de-escalation zones set aside in the Astana agreement, in succession, have been starved, bombed and gassed into submission.

Last month, Russia’s defence ministry admitted that its air force had carried out 39,000 bombing runs since Russia’s formal intervention on Assad’s behalf began in September 2015. The ministry counts more than 86,000 “militants” killed and 121,466 “terrorist targets” destroyed. Most of Russia’s bombing runs over the past year have been carried out in the Syrian “de-escalation” zones, and always deliberately target hospitals, shelters and schools.

The UN-sponsored Independent International Commission of Inquiry counts at least 28 chemical attacks the Assad regime has carried out—by sarin gas, chlorine gas and nerve agents—since 2013, when he first claimed to have surrendered his chemical weapons stockpile under the terms of the devil’s bargain between Russia’s Sergey Lavrov and U.S. Secretary of State John Kerry. Human Rights Watch counts more than 80 such attacks carried out since then, almost all by the Assad regime. The regime’s last confirmed mass murder by chemical weapons was in Ghouta in February of this year.

RELATED: How Israel became a defender of the Syrian people

The pattern has repeated itself in Homs, in Ghouta, and most recently in Quneitra, adjacent to the Israeli-held Golan Heights. Quneitra was a “de-escalation zone” that Donald Trump’s White House had pledged to guarantee. In June, Trump abandoned Quneitra and neighbouring Daraa at Putin’s request. Idlib is the last of the Astana agreement’s de-escalation zones.

In each de-escalation arrangement, rebels who agree to surrender have been permitted to keep their small arms and leave with civilians on buses bound for Idlib, a mostly rural governorate on the Turkish border. Nearly 1.5 million people have fled to Idlib in recent years, doubling the population. And now Lavrov, the Russian foreign minister, says the time has come for the “abscess” in Idlib to be “liquidated.”

Already, roughly two-thirds of Idlib’s civilians rely on humanitarian aid, mostly food and medicine, which would be impossible to distribute in the event that Idlib becomes another Aleppo. They have nowhere to run. And there’s nowhere to hide.

More than 1,200 heavily-armed Turkish troops control sections of Idlib’s north in an arrangement provided by the Astana accord. Erdogan is adamant that Turkey, which has already taken in more than half of the six million Syrian refugees in the seven-year-old war, will take no more.

Assad’s Syrian Arab Army and his allies in the Khomeinist-backed Lebanese terror organization Hezbollah were reportedly moving northward from their bases in southern Idlib this past weekend, bombing villages along the way.

Trapped in between are roughly 60,000 anti-Assad fighters affiliated with a variety of rebel groupings, several directly supported by Turkey. Another 10,000 fighters are said to be affiliated with Hay’at Tahrir al-Sham, a jihadist front despised by Idlib’s civil society leaders and designated a terrorist group by the UN Security Council due to its associations with al-Qaida.

While Vladimir Putin’s air force and Assad’s barrel bombers control the skies, a Russian armada of more than two dozen ships with long-range missile capacity and combat aircraft has been assembling off the coast of the neighbouring governorate of Latakia. It’s the largest Russian naval mobilization in the region since the collapse of the Soviet Union. The mobilization was at first billed as a naval exercise. But Kremlin spokesman Dmitri Peskov has since confirmed that the drills are directly linked to the Kremlin’s plans for “liquidation” of anyone in Idlib who does not surrender.

Russian and Syrian disinformation campaigns are already ramping up scare stories about Turkish-backed militants (or alternatively, al-Qaida, and sometimes the White Helmets) “with dark brown skin who speak French and English” have been detected planning a “false flag” chemical weapons attack as a pretext for an American invasion. This alone should count as evidence that Assad is almost certainly planning a resumption of his own chlorine gas atrocities. In any case, senior U.S officials told the Wall Street Journal last Friday that Assad has already approved the use of chlorine gas in Idlib. While U.S. ambassador to the UN Nikki Haley and Pentagon officials have warned that any chemical weapons attack will invite a swift American response, it wouldn’t necessarily involve a military response, State Department officials say.

UN secretary-general Antonio Guterrez, meanwhile, has been reduced to begging Russia, Iran and the Assad regime “to exercise restraint and to prioritize the protection of civilians.”

They won’t. They didn’t in Ghouta, or Dhouma, or Daraa, or Quneitra, or Homs, or Aleppo, and they won’t start now.