Syria's refugee crisis could explode across the Middle East and beyond—and the West’s lack of action will come back to haunt it. 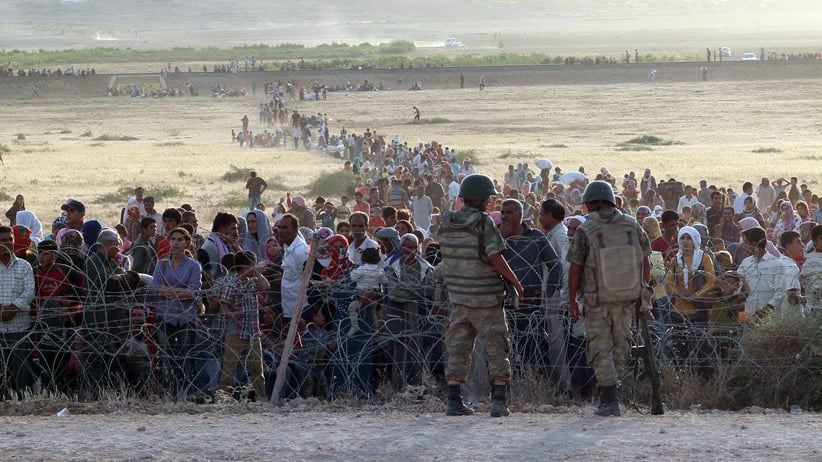 Turkish soldiers stand guard as Syrians wait behind the border fences near the southeastern town of Suruc in Sanliurfa province. (Kadir Celikcan/Reuters)

Imagine every third person in Canada were suddenly gone—some dead, but most displaced, forced to leave much of what they own behind and move to another part of the country, or beyond Canada altogether, to live in tents or stairwells or under bridges. Imagine some 10 million people—more than the population of British Columbia and Alberta combined—driven from their homes by violence.

This is the situation facing Syrians, who, after almost four years of war that began with an uprising against President Bashar al-Assad, are suffering through one of the largest forced migrations of people since the Second World War. More than three million are refugees outside Syria. Roughly seven million are internally displaced. It’s a rupture that may never be mended. “The Syria that had existed before 2011 is gone forever,” says Lina Khatib, director of the Carnegie Middle East Center in Beirut.

Now imagine that a war causing so many to flee was not taking place in Canada, but in a nearby country—the United States or perhaps Mexico. Imagine that it was to Canada that the refugees were running, hundreds of thousands of them. Imagine that Canada’s population grew by 25 per cent in three years due to the influx, as has happened in Lebanon, which is now housing one million refugees without adequate international help.

In reality, Canada’s hospitality has been more modest. In July 2013, Ottawa pledged to take in 1,300 Syrian refugees by the end of 2014, and failed to meet that target. According to Kevin Menard, a spokesman for Immigration Minister Chris Alexander, as of Jan. 3, Canada had welcomed 1,063 of those refugees. He says more have been approved and will arrive shortly. This morning, Alexander announced Canada would accept another 10,000 Syrian refugees over the next three years, and 3,000 Iraqis this year. This is in addition to a previous pledge to settle 5,000 Syrian, Iraqi and Iranian refugees out of Turkey by 2018, easing the burden refugees have imposed on that country

Canada also says it has spent more than $600 million because of the Syrian war, although not all of this money has gone toward humanitarian relief initiatives that directly help refugees. Today, the government announced another $90 million in humanitarian assistance for those affected by the violence in Syrian and Iraq. These are sizeable sums, but they are dwarfed by the more than $4 billion that Turkey estimates housing more than one million refugees has cost it.

Bessma Momani, a senior fellow at the Centre for International Governance Innovation, based in Waterloo, Ont., says the West’s response to the Syrian refugee crisis has been “abysmal, just abysmal.” There are exceptions—notably, Germany and Sweden, and now Canada—but, in general, it has fallen to Middle Eastern countries with poorer infrastructure and less money than North American and European nations to shelter the vast majority of Syrian refugees.

This has strained everything from roads to electricity grids to water supplies. “Most countries, Canada included, accommodate for a one- to two per cent increase in population growth,” says Momani, also an associate professor at the University of Waterloo. “What does that mean when you have instantly a developing country with a 25 per cent population increase?”

Tensions between refugees and the native population have grown, exacerbated by inflation and competition for jobs that Syrian refugees are often willing to do for less money. “Jordanians and people in much of the Middle East are very welcoming and very accommodating to the idea of refugees. In the first year or two, there were a lot of open arms and sympathy,” says Momani. “There’s a great deal of resentment now, a feeling of: ‘How many more people can we take before this ship breaks?’ ”

Lebanon is particularly fragile, because of its delicate sectarian balance composed of citizens who are Christians, Sunni and Shia Muslims, among others. The influx of refugees has sharply increased the number of Sunni Muslims in the country. “This is causing Lebanon’s other communities to feel pressured and also threatened,” says Khatib. “They fear that, further down the line, this may upset the sectarian political equation in Lebanon, and many are using this as an excuse to try to—as they put it—defend themselves against potential Sunni radicalization. This is only making communities more inward-looking, and to seek to even arm themselves under the pretext of self-defence.”

Some Sunnis in Lebanon have joined extremist groups, such as al-Qaeda’s Syrian franchise, Jabhat al-Nusra, says Khatib. “It risks spiralling out of hand in the near future, especially if Syrian refugees find themselves left with no choice but to resort to either crime or joining terrorist networks, simply to make a living,” she says.

The situation in Jordan is slightly different because the country is more religiously homogeneous, as most residents are Sunni Muslims. But there, too, the influx of refugees threatens the country’s political stability. About half of Jordan’s population is Palestinian, and Amman has been reluctant to admit more Palestinian refugees from Syria. In August, Human Rights Watch condemned Jordan for refusing entry and deporting Palestinians attempting to escape Syria.

An additional point of tension exists between Jordan’s pro-Western government and the Syrian refugees it has accepted. The refugees, says Andrew Tabler, a senior fellow at the Washington Institute for Near East Policy, “are, predictably, critical of Western countries for standing by and doing precious little while they’re mowed down by the Assad regime and pushed out of their homes. That puts some pressure on [the Jordanian government.]”

The Syrian war, in short, is reverberating in potentially dangerous ways beyond its borders. “Syria is not going to implode. It’s going to explode,” says Momani. 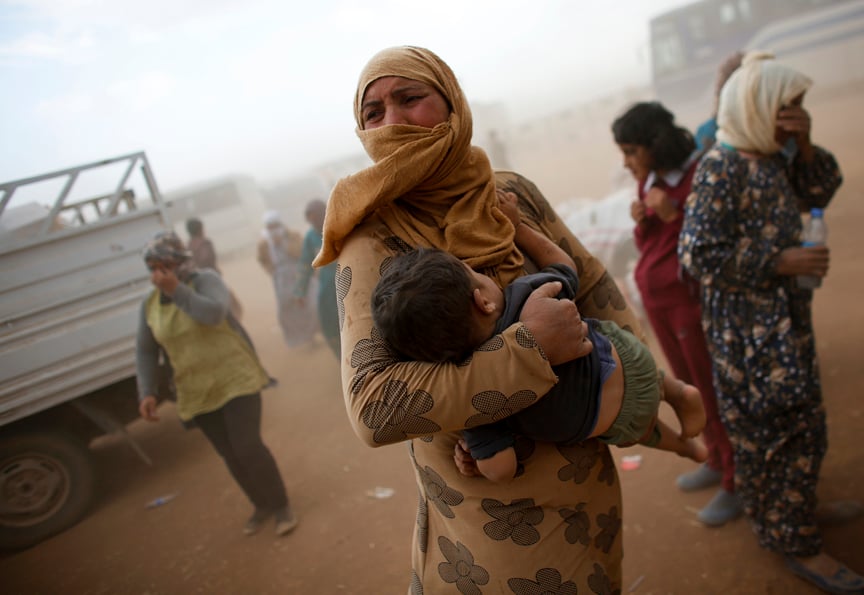 A Kurdish Syrian refugee waits for transport during a sand storm on the Turkish-Syrian border near the southeastern town of Suruc in Sanliurfa province. (Murad Sezer/Reuters)

Canada has said that when it chooses which refugees to accept, it will “prioritize” ethnic and religious minorities—a criterion that, by definition, excludes Syria’s majority of Sunni Muslims. “We will prioritize persecuted ethnic and religious minorities, those at demonstrated risk, and we will make no apologies for that,” Costas Menegakis, parliamentary secretary to the minister of immigration, told the House of Commons in December.

From a humanitarian perspective, this makes little sense. Syria is an equal-opportunity charnel house. Assad’s regime tends to favour those who share his Alawite Muslim faith, and Sunni Muslims have suffered disproportionately—but far from exclusively—at the hands of regime thugs. The jihadist group Islamic State, which controls large chunks of territory in the north and east of Syria, is comprised of Sunni Muslims, but it slaughters anyone who opposes it—including Sunni Muslims.

When pressed for details on Menegakis’s statement—Which Syrian minorities will be prioritized? How will the policy be implemented? What is the ethnic and sectarian breakdown of the refugees who have so far arrived?—Menard declined to elaborate, other than to say, in an email, that the parliamentary secretary’s comments stand.

Faisal Alazem, a spokesman for the Syrian Canadian Council, says some Syrians in Canada suspect the government would prefer Syrian Christian refugees over Muslim ones. “It’s something that is not well perceived,” he says, referring to Menegakis’s statement. “People are talking about that, and they’re disappointed.”

But turning away refugees will not successfully insulate Western nations from the reverberations of the Syrian war. “It’s based on the already failing notion that this conflict can be effectively contained, and there’s no impact from it. And that’s simply not true,” says Tabler.

Ottawa has close ties to Jordan, and belongs to the same NATO alliance as Turkey. “The number one way to help them is to help alleviate that burden,” says Momani, referring to the strain of housing so many refugees. Accepting more refugees, however, alleviates only a symptom of the Syrian war. “Re-homing a quarter of the Syrian population is not going to be a viable solution in the long run,” says Khatib. “As long as the conflict continues, people are going to continue to leave Syria. Simply increasing the quotas is not addressing the conflict.” Adds Alazem: “If you don’t address the political crisis, this humanitarian tragedy will never end.”

But the West has done little to bring an end to Syria’s ever-worsening war. Assad, whom most Western nations declared illegitimate years ago, still rules in Damascus, while his air force drops barrel bombs on civilian neighbourhoods throughout the country. Islamic State murders and enslaves those who won’t accept its fascist barbarism. Millions of ordinary Syrians are desperate to escape both. They have few places to go.