Three months after typhoon Haiyan, residents of one hard-hit city wonder if they’ll ever recover 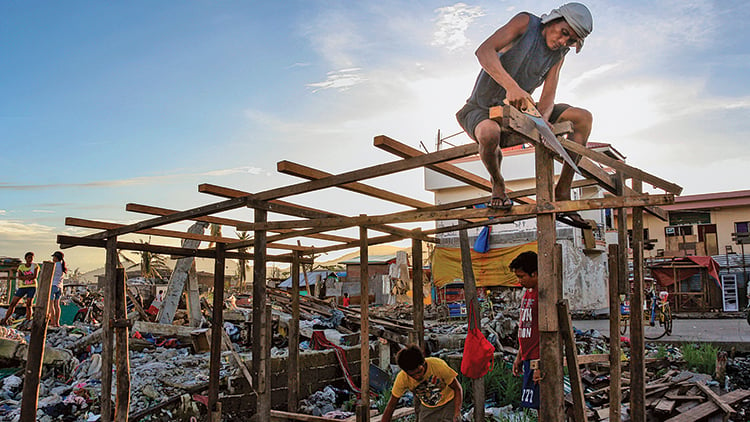 Most of the time Roger Mabingnay worries about being able to provide for his family. When typhoon Haiyan devastated his hometown of Tacloban last November, it washed away his source of livelihood: a small fishing boat. His wife nets a few pesos running a small variety store, but it’s not enough to feed and clothe them and their eight kids. “If my father’s not fishing, we don’t have enough food to eat,” says his 18-year-old daughter, May.

For the past few months the family has been able to survive off relief goods, but Mabingnay knows the aid won’t last forever. Sitting on a wooden bench surrounded by debris in the city’s seaside district of San Jose, the fifth-generation fisherman stares out into the sapphire waters. He has one wish: “money to get a boat and rebuild my business.”

Over three months after record-breaking winds and seven-metre waves flattened millions of homes and killed at least 6,000 people across the country, the recovery in Tacloban, the hardest-hit city, has been painfully slow, say residents here. Many people live in tents. The few temporary bunkhouses completed by the government are being renovated after UN experts slammed them for being too crowded and a potential fire hazard. More than half the city, which has a population of 220,000, is still without electricity, making it difficult for businesses to bounce back. At the town market, vendors display meat, fruits and vegetables, but at easily double the cost they were before the storm, putting them out of reach for many who have lost their jobs.

With each passing day, locals are growing increasingly frustrated. “I want to protest,” says Mabingnay. “We haven’t received any money when in fact we heard over the radio that millions in foreign aid are being given to victims.” Late last January thousands of members of People’s Surge, an alliance of typhoon survivors, marched the streets of Tacloban demanding roughly $1,000 for each affected family. Since then, the group claims to have amassed over 17,000 signatures in support of their cause.

Another group is taking its grievances a step further. The Tindog People’s Network describes the national government’s response to the super typhoon as “criminal neglect” and plans to file a class-action lawsuit against the administration of President Benigno Aquino III.

Alfred Romualdez, the mayor of Tacloban, isn’t surprised by the angry reaction. “The people are getting tired of photo ops showing them there’s a lot of help when there’s not,” he says, adding that he hasn’t received any cash donations to help deliver basic services. Almost half the city’s budget comes from local business taxes and fees, which have dropped 80 per cent since the storm. Meanwhile, expenses have soared.

No one in Tacloban is feeling the pinch more than fishermen, who were the poorest of the poor even before Haiyan. The Bureau of Fisheries and Aquatic Resources (BFAR) is working with private groups and donors to help repair or replace the over 30,000 fishing boats it says are needed. But as of last week, only about 13 per cent of those vessels are operational.

To complicate matters, the national government has imposed a controversial safety measure: a no-build zone preventing any structure from being erected within 40 m of the shoreline. But the policy will later allow for commercial developments within that zone, purportedly to help revive the devastated economy. Pamalakaya, a local fishing industry alliance, argues the policy is really being used to justify the creation of lucrative eco-tourism projects at the expense of impoverished fishermen. Pamalakaya recently staged a protest against no-build zones.

Others say that since witnessing the destruction wrought by Haiyan, many fishermen actually do want to distance themselves from the coast. Preliminary findings from a survey being conducted by Oxfam on no-build zones found the main issue to be a lack of information. “A lot of people say they’re happy to be relocated, but they need to know when it’s going to happen, where they’re going to go and what will happen next,” says Carly Sheehan, deputy program manager for Oxfam in Tacloban.

Back in San Jose, Mabingnay stands in front of his makeshift home pointing at a pile of rubble and a tattered pair of red shorts a few metres closer to the water. They’re all that remain of his former dwelling. This place may be all he’s ever known, but if he can’t fish he is willing to learn something new. “If the government gives us a source of income and it’s comfortable, we will live somewhere else.” For now, he’s still waiting and hoping.