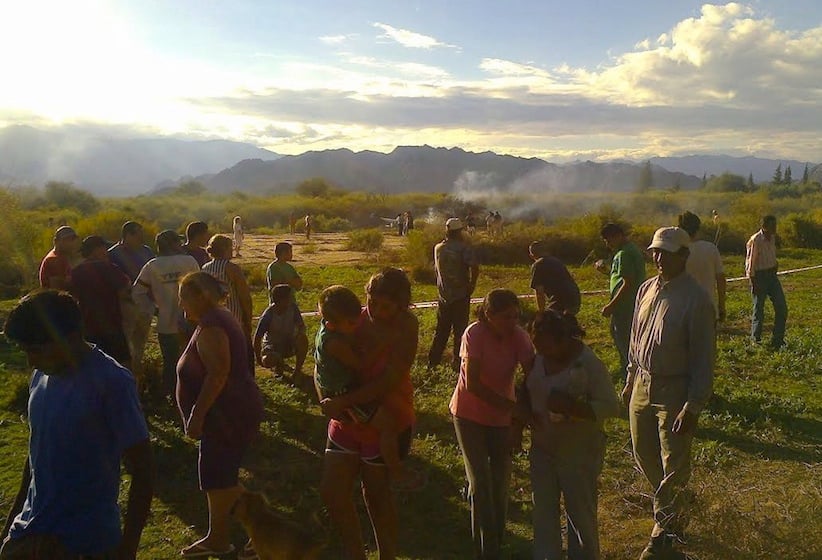 People gather near the smoking remains of a helicopter that crashed with another near Villa Castelli in the La Rioja province of Argentina, Monday, March 9, 2015. (AP photo)

“An explosion occurred and it’s believed that they collided,” said Angulo, referring to the helicopters. Photographs showed the burning and smoking wreckage of the helicopters on the ground in dry scrubland with people gathered nearby.

The news of the deaths during the filming of the reality survival show “Dropped” sent the French sports world into mourning.

“The brutal demise of our compatriots is an immense sadness,” said French President Francois Hollande in a statement.

“Camille was quite a shy and reserved person. She was discreet. But when it was time for a bit of a laugh she was always there,” Olympic gold medallist Amaury Leveaux said. “French sport has lost a great champion.”

Alexis Vastine won a bronze medal at the 2008 Games in Beijing, but his semifinal loss to Manuel Felix Diaz was marred in controversy as he was docked points by the referee in the final round. Vastine broke down in tears after the defeat.

In 2012, he lost in the quarterfinals at the London Games also amid controversy when he drew on points against Taras Shelestyuk of Ukraine but lost on the countback rule, thus missing out on a medal.

“Some had finished their careers and one was dreaming of gold in Rio,” French Secretary of State for Sport Thierry Braillard said on BFM TV channel. “I’m profoundly saddened. French sport has lost three stars this morning.”

Former France and Arsenal striker Sylvain Wiltord, ice skating champion Philippe Candeloro and former Olympic swimming champion Alain Bernard and veteran cyclist Jeannie Longo are among the other French athletes who took part in the show, but none were involved in the accident.

“I am sad for my friends, I’m trembling, I’m horrified, I don’t have words. I can’t say anything,” Wiltord tweeted.

Arthaud, who was 57, was a pioneer in sailing. In 1990, she won the famed Route du Rhum race — a trans-Atlantic single-handed yacht race between Brittany and the Caribbean islands of Guadeloupe — on her boat Pierre 1er.

The crew had arrived on Sunday in Villa Castelli, where it had previously filmed a version of “Dropped” show for Switzerland and Denmark, said the mayor of Villa Castelli, Andres Navarrete.

Argentine authorities were at the scene of the crash late Monday trying to determine its cause.

Angulo said one of the helicopters belonged to La Rioja province and the other belonged to neighbouring Santiago del Estero province.

“The helicopter from La Rioja was a Eurocopter with a capacity to hold six people. It appears to have brushed against the other helicopter from Santiago del Estero shortly after takeoff,” the statement from the provincial government said.

A rugged, sparsely populated area is on the edge of the Andes mountain range that separates Argentina and Chile. The crash happened around 5:15 p.m. local time, according to Argentine news agency Telam.