For the time being, the diplomacy pushed aside previous heated warnings of imminent war 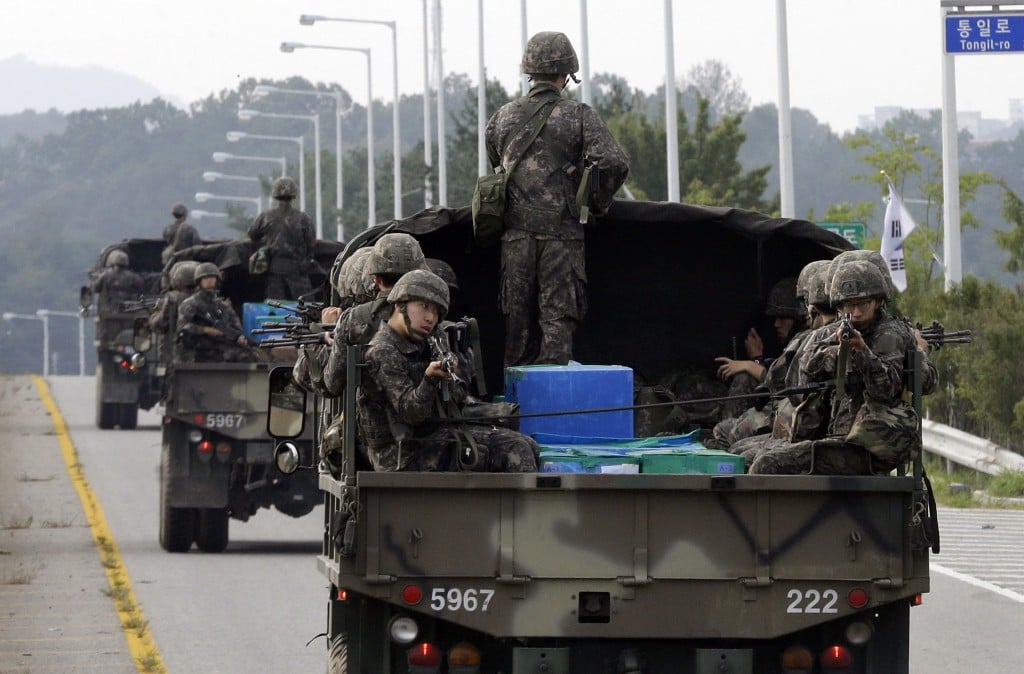 South Korean army soldiers ride on trucks in Paju, south of the demilitarized zone that divides the two Koreas, South Korea, Monday, Aug. 24, 2015. Marathon negotiations by senior officials from the Koreas stretched into a third day on Monday as the rivals tried to pull back from the brink. South Korea’s military, meanwhile, said North Korea continued to prepare for a fight, moving unusual numbers of troops, hovercraft and submarines to the border. (AP Photo/Ahn Young-joon)

PYONGYANG, Korea, Democratic People’s Republic Of — Marathon negotiations by senior officials from the Koreas stretched into a third day on Monday as the rivals tried to pull back from the brink. South Korea’s military, meanwhile, said North Korea continued to prepare for a fight, moving unusual numbers of troops, hovercraft and submarines to the border.

Officials described a “tense” mood but refused to provide details of the talks, which started Saturday evening and whose second session began Sunday afternoon and was still going late Monday morning. For the time being, the diplomacy pushed aside previous heated warnings of imminent war.

At issue is a South Korean demand that the North apologize for what Seoul says was a land mine attack that maimed two South Korean soldiers and that was followed by an artillery barrage last week. North Korea denies both attacks and demands that Seoul stop anti-Pyongyang propaganda broadcasts started in retaliation for the land mine explosions.

These are the highest-level talks between the two Koreas in a year. And just the fact that senior officials from countries that have spent recent days vowing to destroy each other are sitting together at a table in Panmunjom, the border enclave where the 1953 armistice ending fighting in the Korean War was agreed to, is something of a victory.

The length of the talks — nearly 10 hours for the first session and more than 18 for the second — and the lack of immediate progress are not unusual. While the Koreas often have difficulty agreeing to talks, once they do, overlong sessions are often the rule. After decades of animosity and bloodshed, however, finding common ground is much harder.

The decision to hold talks came hours ahead of a Saturday deadline set by North Korea for the South to dismantle the propaganda loudspeakers. North Korea had declared that its front-line troops were in full war readiness and prepared to go to battle if Seoul did not back down.

South Korea said that even as the North was pursuing dialogue, its troops were preparing for a fight.

An official from Seoul’s Defence Ministry said that about 70 per cent of the North’s more than 70 submarines and undersea vehicles had left their bases and were undetectable by the South Korean military as of Saturday. The official, who refused to be named because of official rules, also said the North had doubled the strength of its front-line artillery forces since the start of the talks Saturday evening.

The standoff started with the explosions of land mines on the southern side of the Demilitarized Zone between the Koreas that Seoul says were planted by North Korea. In response, the South resumed anti-Pyongyang propaganda broadcasts for the first time in 11 years, infuriating the North, which is extremely sensitive to any criticism of its authoritarian system. Analysts say the North fears that the broadcasts could demoralize its front-line troops and inspire them to defect.

On Thursday, South Korea’s military fired dozens of artillery rounds across the border in response to what Seoul said were North Korean artillery strikes meant to back up an earlier threat to attack the loudspeakers.

The Defence Ministry official said the South continued the anti-Pyongyang broadcasts even after the start of the talks Saturday and also after the second session began Sunday. He said Seoul would decide after the talks whether to halt the broadcasts.

While the meeting offered a way for the rivals to avoid an immediate collision, analysts in Seoul wondered whether the countries were standing too far apart to expect a quick agreement.

South Korea probably can’t afford to walk away with a weak agreement after it had openly vowed to stem a “vicious cycle” of North Korean provocations amid public anger over the land mines, said Koh Yu-hwan, a North Korea expert at Seoul’s Dongguk University.

In Pyongyang, North Korean state media reported that more than 1 million young people have volunteered to join or rejoin the military to defend their country should a conflict break out.

Despite such highly charged rhetoric, which is not particularly unusual, activity in the North’s capital remained calm on Sunday, with people going about their daily routines. Truckloads of soldiers singing martial songs could occasionally be seen driving around the city, and a single minivan with camouflage netting was parked near the main train station.

Instead of anxiously awaiting the outcome of the talks, many Pyongyang residents were riveted to TVs in public places to watch the debut of the “Boy General” cartoon show, which has been revamped for the first time in five years at the order of Kim Jong Un.