Terror in the heart of London

The British Parliament was put on lockdown this afternoon after a terrorist attack near Westminster left four dead and 20 others severely injured.

Around 2:30 pm on Wednesday a vehicle travelled north over the Westminster Bridge in London and as it approached Big Ben and the houses of Parliament, veered off the road and mowed into several people, killing at least two and leaving others seriously “catastrophically injured”, according to local news reports. Three French schoolchildren were among the injured, according to Reuters. At least one eye-witness reported seeing a body floating in the waters of the River Thames below the bridge—a woman who was later rescued by emergency services.

After ploughing his car into a crowd of pedestrians, it’s been reported that the perpetrator got out of the car and continued his attack near Big Ben around Parliament Square by stabbing a police officer with a knife. Foreign Office minister Tobias Ellwood is reported to have attempted mouth-to-mouth resuscitation of an injured police officer at the scene, but the officer did not survive.

The attacker is said to have approached a second officer with a knife and was then was shot by police.

The attack comes one year after 32 people were killed in a bombing attack in Brussels, and follow multiple attacks in Paris in 2015. It will undoubtedly contribute to an already tense climate in Europe.

Photos of the attacker receiving medical treatment on the scene have been released. The images show a bearded man with two knives on the ground beside him. 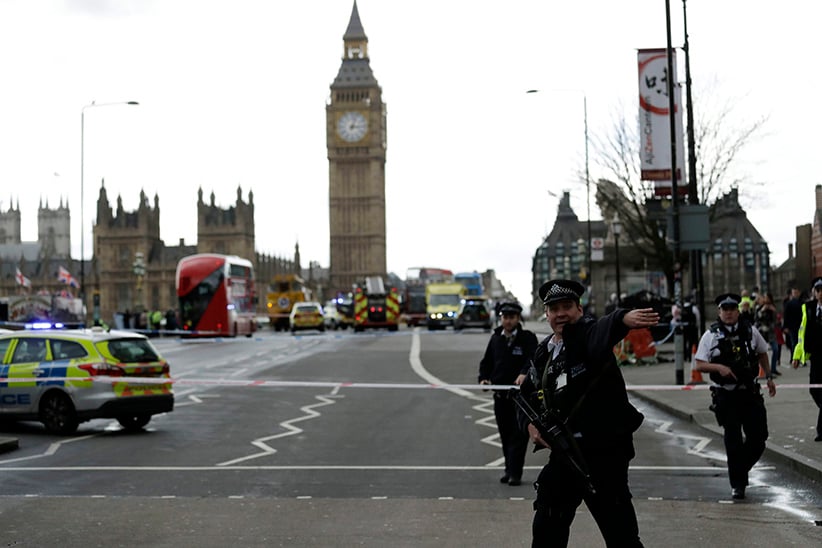 Police secure the area on the south side of Westminster Bridge close to the Houses of Parliament in London, Wednesday, March 22, 2017. The leader of Britain’s House of Commons says a man has been shot by police at Parliament. David Liddington also said there were “reports of further violent incidents in the vicinity.” London’s police said officers had been called to a firearms incident on Westminster Bridge, near the parliament. Britain’s MI5 says it is too early to say if the incident is terror-related. (Matt Dunham/AP Photo)

Eyewitnesses at the scene, including journalists and at least one MP, Conservative Party Chairman Grant Shapps, reported seeing crowds of people fleeing the scene and hearing gunshots in the area.

The Prime Minister, Theresa May, reportedly left Westminster in a chauffeur-driven car shortly after the attack and is reported to be chairing a meeting of the emergency COBRA counter-terrorism committee later today. She is also said to have spoken to US President Donald Trump.

Scotland Yard is said to be treating the incident as a terrorist attack.

Westminster was evacuated floor by floor with people being taken out in groups of 20. Approximately 100 school children were among those evacuated, Wednesday marks the weekly Westminster ritual of Prime Minister’s Questions, which attracts a regular stream of tourists and school trips.

Several MPs were said to be still locked in the building as of early evening on Wednesday.

An earlier version of this story cited reports that misidentified the attacker. It has been edited to remove the reference.