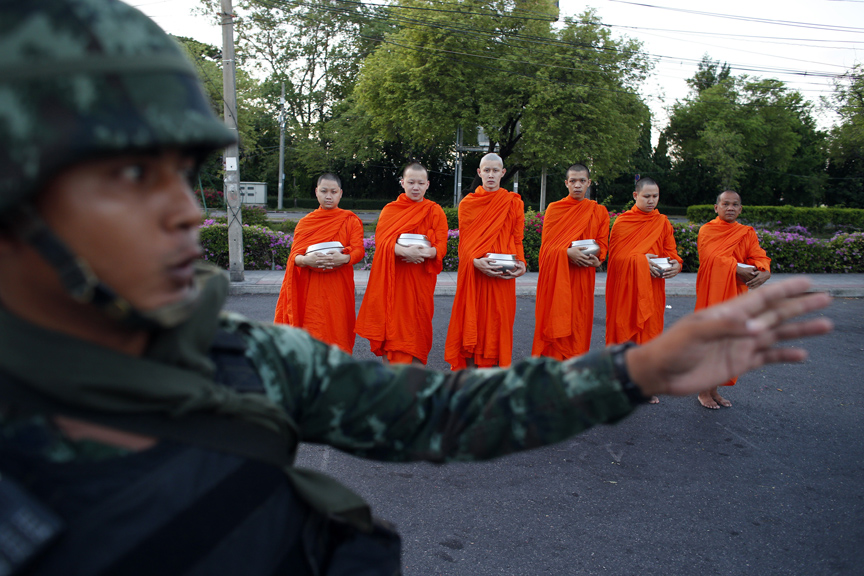 A Thai soldier stands guard while Buddhist monks beg for alms outside a temple near Government House in Bangkok on May 23, 2014. (Athit Perawongmetha/Reuters)

BANGKOK, Thailand — The head of the military junta that took control of Thailand in a coup last week said Friday that new elections may not occur for more than a year because peace and reforms must be achieved first.

Army commander Gen. Prayuth Chan-ocha spelled out the junta’s plans in his first speech directly to the public since the May 22 coup.

Prayuth repeated warnings against protests or resistance to the army’s takeover, saying they would slow the process of bringing back “happiness” to the Thai people.

A return to democracy will not happen if there are still “protests without a true understanding of democracy,” he said.

The speech was meant to reassure Thais that the army has a plan to keep the country stable.

But it was unlikely to win favour among supporters of the ousted civilian government, because it laid out broadly the same program that had been advocated by anti-government protesters who had demonstrated aggressively for seven months to topple it, clashing with police and occupying government offices.

Prayuth said it would take the junta, called the National Council for Peace and Order, at least two to three months to achieve reconciliation in the deeply divided country, and it would then take about a year to write a new constitution and set up an interim government. Only then could elections be held, he said.

“Give us time to solve the problems for you. Then the soldiers will step back to look at Thailand from afar,” he said.

The United States, a longtime ally of Thailand, said Thursday it believed elections should be held sooner.

“Certainly we don’t want anything to end in chaos, but we think setting a timeline for early elections is something that is not just possible but it’s what the appropriate step is and that that should be what their focus is on,” State Department spokeswoman Jen Psaki told reporters in Washington.

Prayuth did not mention former Prime Minister Thaksin Shinawatra, whose political machine was the protesters’ main target. Thaksin was overthrown in a 2006 military coup after being accused of corruption and abuse of power. His sister, Yingluck, was prime minister of the government that was besieged by protesters. Her government won a landslide election victory three years ago.

Prayuth explained the reasons for the army’s action and the junta’s plans for administering the country, emphasizing financial stability and transparency.

“The reason NCPO has taken control of national administration was because of the prolonged political deadlock, protests, and violence,” he said. “The caretaker government was unable to perform their duties effectively,” and the situation risked hurting the economy, he said.

International reaction to the coup has been largely negative. English-language subtitles accompanied Prayuth’s talk, which was broadcast on all television stations.

“The NCPO does understand the feelings of the foreigners,” he said. “We do understand the world’s order that at the moment, it’s the world of democracy. But let us have time to change our attitudes, values and several other things to solve Thailand’s democracy to make it match with the international standards.”

In the past week, the junta has moved to silence its critics and warned that it will not tolerate dissent.

It has summoned more than 250 people, including members of the government it ousted and other leading political figures, journalists, scholars and activists seen as critical of the regime. Roughly 70 people are still in custody.

On Friday, the military sealed off a major Bangkok intersection for a second day to prevent a possible protest. The massive show of force — involving hundreds of troops during the evening rush hour — came in response to small but near-daily demonstrations that have raised tensions and concerns the army will crack down on protesters.

Thaksin is still supported by many rural Thais for his populist programs but despised by others — particularly Bangkok’s elite and middle classes — over allegations of corruption, abuse of power and disrespect for the monarchy. He lives abroad in self-imposed exile but held great influence over the government led by his sister.

Despite the latest political upheaval, life has continued largely as normal in most of the country, with tourists still relaxing at beach resorts and strolling through Buddhist temples in Bangkok and elsewhere.

A curfew remains in effect from midnight to 4 a.m. but has not affected critical travel, including that of tourists arriving at airports. Prayuth said his government would try to ease it as soon as possible.