Suspect admits to being near shrine where attack happened, but denies that he placed the bomb, Thai police say

By The Associated Press September 2, 2015 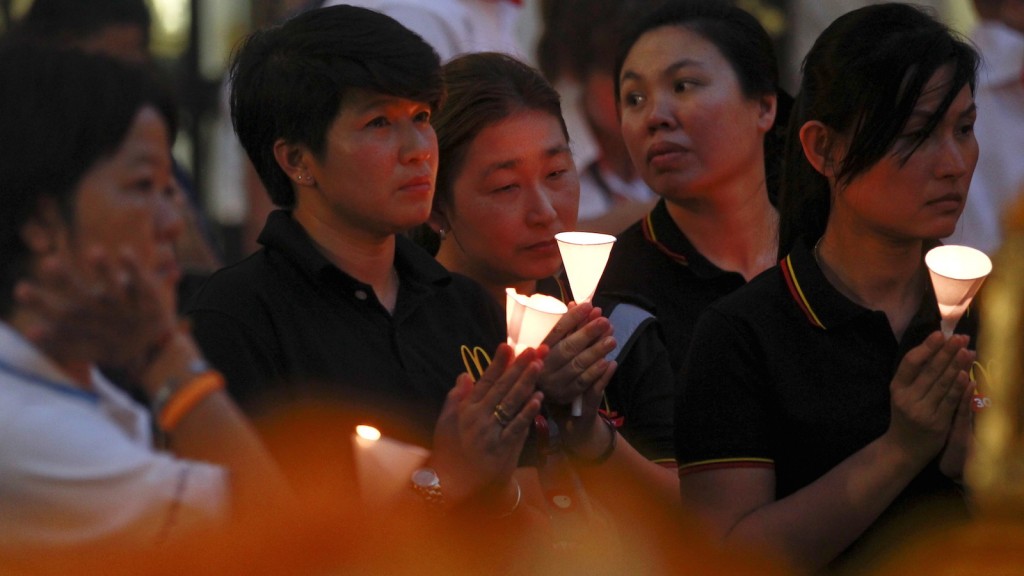 BANGKOK — Thai police said Wednesday a prime suspect in Bangkok’s deadly bombing has admitted to being near the shrine where the attack took place but denied placing the bomb, as other clues pointed increasingly to a link with the trafficking of a minority ethnic group from China via Thailand.

Thai authorities said the suspect’s fingerprints also matched those on a bottle of bomb-making material found in an apartment that was raided this past weekend.

Deputy National Police Chief Chakthip Chaijinda was asked by reporters if the man — whose name and nationality have not been released — had confessed to involvement in the Aug. 17 blast at Erawan Shrine that killed 20 people and injured more than 120, or another explosion the following day near a busy river pier that caused no casualties.

“It is in the nature of the suspect to deny it, but he admits that he was there in the area when it happened,” Chakthip said.

Thai authorities say the man, identified only as a foreigner, was arrested Tuesday near the border with Cambodia as he was attempting to flee.

Police announced separately that they are seeking the arrest of a Turkish man, Emrah Davutoglu, who they believe is also linked to the blasts. He is at least the third Turk among eight suspects for whom arrest warrants have been issued.

The Turkish connection has fueled speculation the suspects may be part of a group seeking to avenge Thailand’s forced repatriation of ethnic Uighurs to China in July. Thailand is believed to be a transit stop for Chinese Uighurs attempting to go to Turkey.

Uighurs (pronounced WEE-gurs) are related to Turks, and Turkey is home to a large Uighur community. The Erawan Shrine is especially popular with Chinese tourists, feeding the idea that it could be a target for people who believe the Uighurs are oppressed by China’s government. Beijing says some Uighurs are Islamist terrorists, and that among them is a group that has been smuggled out of China to join Islamic State fighters in Syria.

The new suspect, Davutoglu, is the husband of a Thai woman for whom an arrest warrant was earlier issued because she had rented the apartment where the bomb-making materials were found. She has said she is innocent and is now living in Turkey.

National police spokesman Prawut Thavornsiri said authorities are still conducting DNA tests but have determined that the man arrested near the Cambodian border “is important and is related or conspired with people who committed” the bombing at the shrine.

Asked about speculation in Thai media that the man is a Chinese Uighur, Chinese Foreign Ministry spokeswoman Hua Chunying said they had noted the reports.

“We are in close communication with the Thai side,” she said. “The Chinese side will closely follow the development of the case. We believe that whoever carried out such a crime should be dealt with according to law.”

The investigation into the attack picked up momentum after police raids over the weekend on two apartments on the outskirts of Bangkok that both contained bomb-making materials.

In the first apartment, raided Saturday, police arrested a suspect they described as a foreign man and seized detonators, ball bearings and a metal pipe that could be used as a bomb casing. The suspect had a Turkish passport, though Thai authorities say it was fake. They seized more than 200 passports at the apartment, including many that appeared to be Turkish and possibly fake.

They also took fingerprints from the apartment which matched those of the suspect arrested Tuesday near the border, Prawut said.

“We can confirm that the man’s fingerprints match with those found on a bottle that contains a bombing substance,” Prawut said. “He could be the one who brought the bomb out of this apartment or he could have brought the bomb to the crime scene.”

The Turkish Embassy in Bangkok said it has asked the Thai government to confirm whether the suspect arrested Saturday is a Turkish citizen, and said it regrets “the speculative news reports regarding the nationalities of the arrested and sought suspects.”

Both arrested suspects are being interrogated by the military and have not yet been formally charged.

When authorities announced the arrest Tuesday of the suspect near the border, they described him as resembling a man shown in surveillance video at the shrine who is believed to have planted the bomb. The man in the video, wearing a yellow T-shirt, placed a backpack on a bench and then left the area shortly before the explosion.

Prime Minister Prayuth Chan-ocha said officials knew from their investigation that people involved in the bombing were about to flee the country and had traced one of the suspects to Aranyaprathet district in Sa Kaeo province, a crossing point to Cambodia.

Reports in the Bangkok Post newspaper and Cambodia’s Phnom Penh Post, however, gave a different account. Citing unnamed sources, they said the man was arrested at the airport in the Cambodian capital, Phnom Penh, as he was about to catch a departing flight and was turned over to Thai authorities at the border.