Floridians are no strangers to sinkholes 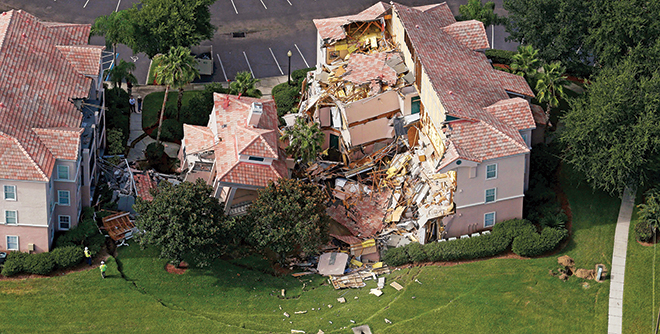 For guests at the Summer Bay Resort in Clermont, Fla., west of Orlando, the first sign that something was amiss was the sound of cracking windows. Close to midnight on Aug. 11, dozens of guests were evacuated as a sinkhole yawned open, partially collapsing a three-storey villa on the resort. Maggie Ghamry, who was vacationing with a friend and their kids, told the Orlando Sentinel she’d seen the building where they were staying “twisting around like it was in a vortex” before it collapsed into the 30-m-wide sinkhole—a scene that wouldn’t be out of place on a ride at Walt Disney World, a short drive away.

Floridians are no strangers to sinkholes. In February, 37-year-old Jeff Bush of Seffner, just outside Tampa, was sucked into one that opened under his bedroom floor as he lay sleeping; he was never seen again. (Five others in the same house were unharmed.) Florida sits on a platform of sedimentary rock, much of it limestone, which is porous and dissolves as rainwater travels down through the soil. This creates tunnels, caverns and, of course, sinkholes—common features of what’s called “karst terrain,” which defines much of the state (and about one-fifth of the U.S.). Extreme weather, pumping of groundwater and other man-made factors also contribute.

On Aug. 13, facing some guests’ cancellations during peak season, Summer Bay president Paul Caldwell tried to calm worries that another sinkhole could appear. That one ruined villa was just three per cent of the 300-acre resort’s capacity, he noted. “We are open for business.”