The Barcelona attack and what it says about ISIS today

The cell behind the Las Ramblas attack was not sophisticated. But its tactics underscore how difficult it will be to end this kind of terror. 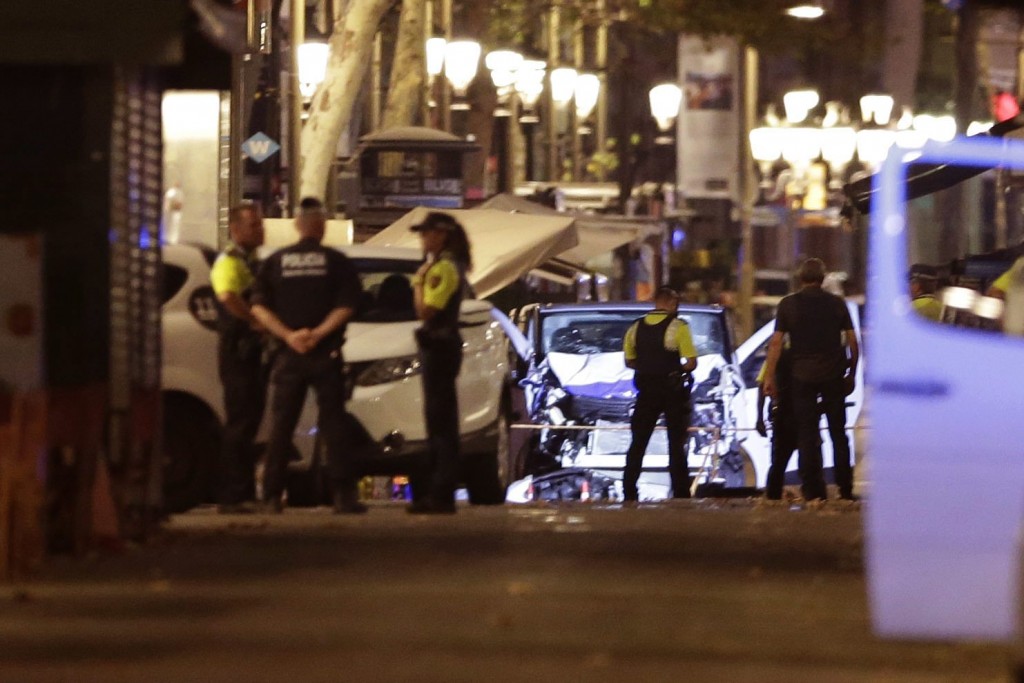 Police officers stand next to the van involved on an attack in Las Ramblas in Barcelona, Spain, Thursday, Aug. 17, 2017. (AP Photo/Manu Fernandez)

This is where terrorism is today: on Thursday afternoon, a van driven by a man in his 20s, a Moroccan national living in Spain, tore through the tree-lined Las Ramblas street  in central Barcelona, killing 13 and injuring at least 100. Las Ramblas, a picturesque pedestrian avenue popular with tourists, was packed during the height of the summer tourism season. Children played in the shade of its towering plane trees while their parents sat at outdoor cafes and restaurants. Shoppers strolled past flower shops and street performers dressed in audaciously colourful outfits. It was, by all accounts, a typical day in one of the most beautiful locales of one of Europe’s most stunning cities.

The driver of the van, identified as Moussa Oukabir, turned that idyllic urban scene into a nightmare. His cowardly act has become the signature of the so-called Islamic State, which claimed responsibility through its Aamaq news agency. Vehicle rammings over the past year attributed to ISIS have claimed dozens of lives and injured hundreds.

But this one was different. In the past, these sorts of attacks have typically been carried out by lone wolves largely acting on their own initiative. The carnage in Barcelona, according investigators, was part of a larger series of attacks planned by a terrorist cell consisting of as many as 12 people. While it’s still unclear if they received any instructions from ISIS handlers in Syria or elsewhere, the scale of their operation raises some important questions.

READ MORE: Why the war against ISIS is going to get worse

Police reports suggest the cell, based out of Alcanar, a town 190 km south of Barcelona, had likely been planning its attacks for months. An explosion at a house in Alcanar on Wednesday night, which investigators have now linked to the Barcelona attack, appears to have been the home base of the cell. The explosion was reportedly triggered by 20 butane gas cylinders which the cell was preparing to use in what would have been a massive truck bomb. But they exploded prematurely, leveling the house and killing one person.

According to the most plausible series of events police have stitched together, the plotters then changed tactics, resorting to rudimentary vehicle rammings using the van in Barcelona and a second vehicle in Cambrils, a resort town 110 km to the southwest. That attack, carried out early Friday morning, killed one woman and injured six. Five attackers, all wearing fake suicide belts, were killed by police following the attack. One of them is reported to be Oubakir, according to Spanish media.

People are now asking how a plot on this scale could have been missed by Spanish intelligence, which has worked closely with Moroccan authorities to disrupt terrorist networks in Spain. Dozens have been arrested in recent years and yet this cell somehow managed to evade detection.

Their tactics, however, indicate how difficult it is to prevent this kind of attack. Gas cylinders are widely available in Europe and sales are not monitored in the same way industrial chemicals used in improvised explosives are. Accumulating a large number of them over time would not have drawn attention.

RELATED: The terrifying last days of ISIS in Mosul

Terrorists and rebel groups have used gas cylinder bombs extensively in the past. They were a common form of explosive deployed by FARC guerrillas in Colombia. They were used in a June 2007 attempted double car bombing in London but were discovered and disarmed before they could be detonated. And they were found in a car left near the Notre Dame cathedral in Paris last year, also attributed to an ISIS cell. In February this year, Barcelona police shot at a stolen truck carrying butane gas cylinders, fearing it was a terrorist attempting an attack. But the driver turned out to be a mentally ill man.

More importantly, it doesn’t appear the cell was particularly sophisticated and likely had not been on the radar of authorities. The accidental explosion at the home in Alcanar suggests they were unfamiliar with the butane cylinders and how to turn them into a bomb.

Their amateurism is a common feature of ISIS-inspired attacks, unlike al Qaeda which prided itself on executing large, complicated and high-casualty assaults like the 2004 coordinated train bombings in Madrid that killed 192 and injured an estimated 2,000. ISIS and its followers have failed to carry out anything close to that scale.

Part of that failure can be credited to the increased cooperation between intelligence agencies around the world. Large scale attacks, according to terrorism experts, are much more difficult to plan and execute today.

But these kinds of smaller attacks will likely be a feature in western nations for the foreseeable future. They have now become the all-too familiar face of terrorism.