The Canadian medics embedded in the fight against ISIS

Why a group of Canadian volunteers, led by former anti-Islamic State fighters, is rushing into the thick of the war in Mosul 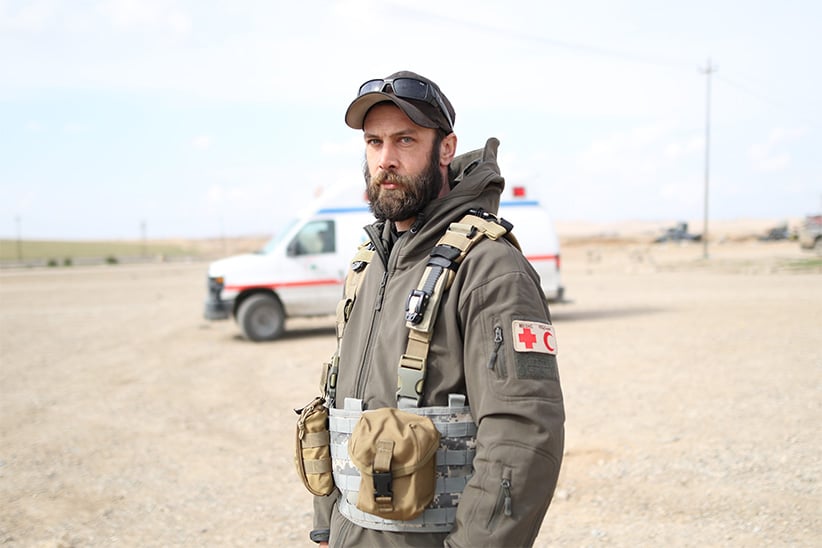 Alex Moreau, the 36- year old Vancouver native and the co-founder of MERMT outside the clinic south of Mosul that will serve as a frontline emergency medical response centre for civilians injured during phase 3 of the fight against ISIS. Moreau began as a foreign fighter in Syria but realized that emergency medical services were more important than killing ISIS fighters. (Photograph by Adnan Khan)

In the early morning hours of Feb. 19, Alex Moreau and his team of four volunteer medics mounted up with a unit of Iraqi federal policemen at a forward operating base 12 km south of Mosul. From the distance, over a ridgeline and through the last stretch of open plain separating Iraq’s security services from territory still held by the so-called Islamic State, came the dull rumblings of mortar and artillery fire.

Moreau, 36, hadn’t seen front-line action for more than half a year, but he was no novice. The former Canadian Forces infantryman had served a three-month stint as a foreign fighter with the Kurdish YPG forces in northern Syria beginning in January 2016. He had left his native Vancouver with one goal: to kill as many Islamic State fighters as he could. “Seeing the horrors of ISIS ignited a fire in me,” he says. “Just seeing what people affected by them were going through made the choice easy: I had to go fight them.”

But one year later, on the front lines in Iraq, Moreau was on a different kind of mission. As his transport rumbled toward ISIS-controlled Mosul airport, he and his team double-checked their medical gear. They had packed light; their mission would require them to remain mobile. For months, they had trained for this, upgrading their knowledge at emergency medical response courses in Canada, going over scenarios based on the experiences team members had from fighting Islamic State in Syria.

The battle for Mosul, they knew, would be different. The third phase of the offensive had begun. Thousands of soldiers from Iraq’s myriad security services were streaming to the front. Fighter jets, either from the U.S.-led coalition air campaign or the Iraqi Air Force, screamed overhead.

If the previous phases of the battle were any indication, this would be the bloodiest fight Moreau would see. With some 650,000 civilians still trapped in western Mosul, the small team of medics was preparing for the worst. Their plan was simple, says Moreau: go where other medical teams were not able to go, “push deep into the environment,” save lives.

That mission is a far cry from what Moreau initially set out to do when he left his life in Vancouver. His first tour in Syria taught him that fighting Islamic State was only a small part of the battle. Men were dying, he tells Maclean’s, often from treatable injuries. Kurdish fighters would watch helplessly as their comrades succumbed to injuries on the battlefield because they lacked the tools and training to treat them. “There were some pretty basic things they were doing wrong,” Moreau recalls. “The Kurds thought, for example, that applying a tourniquet to a limb for more than five minutes would lead to amputation. People bled to death because of it.”

In April last year, he met Max Leopold, a 36-year-old German who was also fighting with the YPG. (Leopold, who is married to a Canadian, now calls Vancouver home.) The two decided they could make more of an impact saving lives rather than taking them. “The thought occurred to me: you can kill 10 ISIS fighters, and that’s great. But we can save hundreds of lives just with basic emergency medical response training. You need people at the front with the proper skills to keep a person alive until they can get to a medical facility. This is what we do.”

READ MORE: Why Canada has a major role to play in rebuilding Iraq

The two set to work establishing a volunteer medical corps in Syria. Their concept was different from any other medical organization. They would embed with fighters and accompany them into battle, providing on-the-ground medical aid to the injured, both combatants and civilians. “Other organizations, like the United Nations or Doctors Without Borders, face a lot of bureaucracy,” says Leopold. “They are limited in what they can do. But we’re a small, mobile team. We have the trust of the front-line units we’re embedded with. We can get to places where the bigger NGOs can’t go.”

Now in Iraq under the banner of the official organization they set up last August in Ottawa, the Multinational Emergency Response Medical Team, or MERMT, Moreau and Leopold have a team of volunteers, mostly Canadians with some military training and experience on the front lines fighting Islamic State, to provide triage for injured civilians escaping the battle zone.

Their first test came on the first day of the push into western Mosul. The federal police unit they were embedded with faced little resistance as it approached the airport. Moreau and his team set up a casualty collection point in an abandoned building on the airport’s outskirts. They took sniper fire and watched mortar rounds land nearby. The injured began to arrive, mostly Iraqi soldiers hit by snipers and mortar rounds.

The next day, the fighting intensified. An Iraqi general, worried about the safety of the MERMT team, pushed them back to a village just south of the airport, where they tended to an increasing number of injured. The team planned to press deeper into Mosul in the coming days.

“We had a child die in front of us because he didn’t get the medical attention he needed in time,” Moreau said in early March. “We need to be closer. We’re aware of the dangers, but this is what we came out here to do. We will not turn back.”