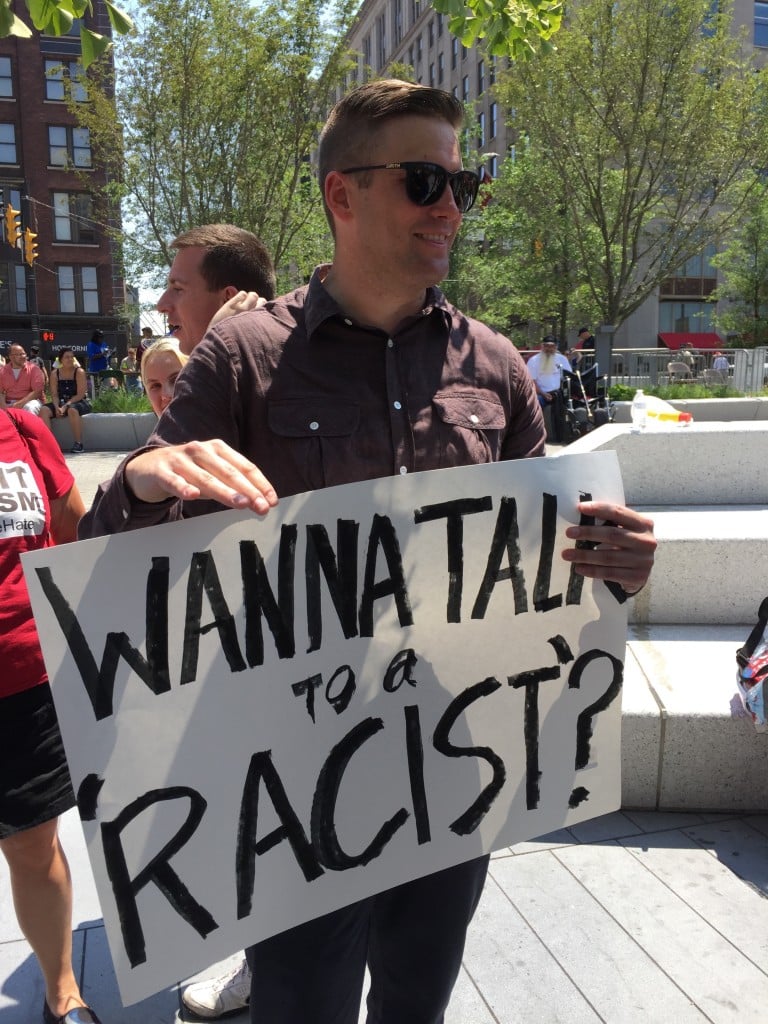 I met Richard Spencer in Cleveland. The man now making international headlines for his rousing “Hail Trump” speech to his alt-right brethren, some of whom returned in kind with arms outstretched in Nazi salutes, was standing in a public square with a handmade sign that read: Wanna talk to a racist?

The way I remember it, he hit on me. He invited me to a Republican National Convention after-party, gave me his phone number and his email address. Charming and confident, I snapped a picture of him standing alongside Mel as he unwittingly posed with a woman he didn’t know was both Jewish and my wife.

A lot has changed since that summer day. Donald Trump is the U.S. president-elect. And Richard Spencer has been declared the father of the euphemistically named “alt-right” movement, sanitized-speak for “white supremacy.”

I decided to dig up Spencer’s phone number to talk to him about his seemingly growing movement, and to get a sense if it has roots here in Canada.

My text: Hey Richard. We met at the RNC. Avery Haines from Toronto. I’d love to chat with you about the alt-right movement in Canada. Can you talk?

His text: I can. This afternoon perhaps.

Earlier in the day I had sent out a couple of tweets about Spencer’s purported question of “whether Jews are even human,” about how he tried to pick me up but how I got the last laugh by snapping a picture of him with my Jewish wife.

His text: I just looked at some tweets. I wasn’t trying to pick you up. I merely chatted with you. I told you about a party and you went to it. Secondly I certainly have never claimed that “Jews are not human.” That was a lie, which CNN explicitly retracted!

I texted back that he could clarify everything over a Skype interview.

His text: Look. You’re an attractive woman, so perhaps I was a bit….ahem…inspired. 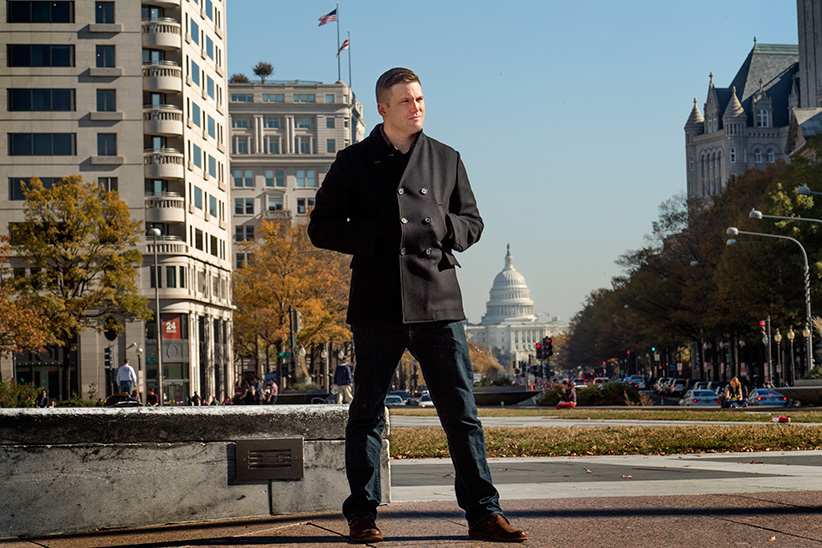 Richard Spencer is in town for the largest white nationalist and Alt Right conference of the year in Washington, DC on November 18, 2016. (Linda Davidson/The Washington Post/ Getty Images)

The “Are Jews even Human” debacle arose from the same hail-Trump-and-Nazi-saluting gathering last weekend. CNN quoted Spencer as telling the crowd, “One wonders if these people are people at all, or instead soulless golem.” (“Golem,” by the way, is a Hebrew word for a magical mud-like creature that is brought to life and afterwards controlled.)

I’m Skyping Spencer at his parents’ home in Montana, where he is visiting for U.S. Thanksgiving.

He wants to clear up the “Jews are not human” comment that was attributed to him on CNN. He says he was actually talking about the “lying media.”

“I said, ‘I sometimes wonder if they are people at all, or are they just soulless Golem, who recite the talking points of John Oliver,’ ” he told me. “It was basically a colourful way of getting some jabs in at media people who dislike us. I was not actually referring to Jews. Then I saw an image from CNN: ‘Alt-right leader questions the humanity of Jews.’ It was an outright lie, and CNN did explicitly retract that.”

Richard Spencer was, just last week, banned from Twitter. He is barred from entering the U.K. for fear he will “incite violence.” He tells me, “My last name is Spencer, yet I can’t even visit my ancestral homeland anymore.” He acknowledges he would likely be banned from Canada as well. In fact, he has been, long before he started making headlines.

“I was stopped at the border. They asked me what I did. I said I was a journalist and they looked at [my website] and turned me away from the border. After that I was allowed back in, but at this point, with the notoriety I have generated I would most likely be prevented from entering Canada. That’s very sad,” he says. “I think Toronto is a very cool town.”

The man who claims to have coined the term “alt-right” actually lived in Toronto from 2010 to 2011. The website that kick-started his movement was born in a small apartment in the downtown core. “Little-known fun fact: I was operating, not anonymously, but operating, from a home office off Yonge Street. [The website] was based in Toronto at its very origins.” 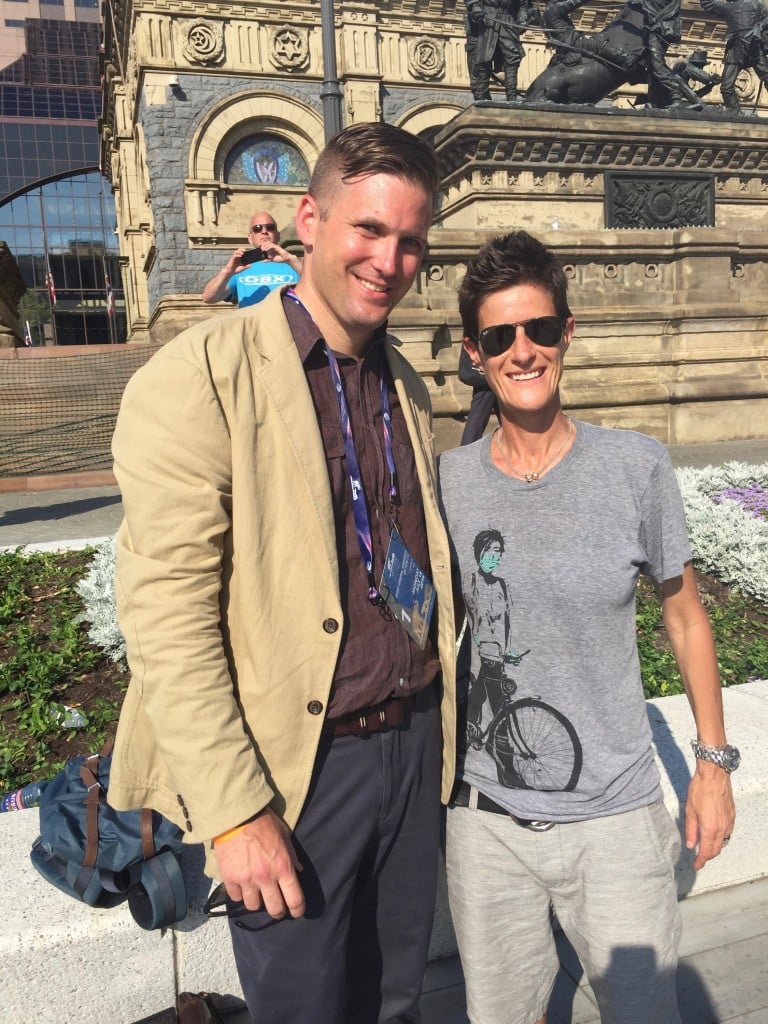 Spencer poses, unwittingly, with Mel, who is both Jewish and is Haines’ wife. (Photograph by Avery Haines)

Spencer claims, while Canadians are, as he puts it, “more reluctant to hold up a glass of whisky and say, ‘Hail Trump,’ ” his movement, without question, exists here. “The alt-right is a movement that is this organic guerrilla warfare. And [in Canada] most of it is anonymous. But I wouldn’t underestimate its power and reach. Someone in your newsroom right now might be tweeting dank memes in their spare time. Someone sitting across from you might be alt-right.”

Richard Spencer doesn’t spew any hate during our interview. He chuckles when he’s asked about using the phrase “Hail Trump” or the Nazi salutes: “I am not going to take it back. I am certainly not going to apologize. There were a handful of people who did a Nazi salute. And I think we should probably knock that off, but the fact is, it was done in the same ironic exuberance as Hail Trump. People can see the alt-right is willing to have fun. Willing to be a little outlandish. And they can see the alt-right is excited about the development of the Trump movement.”

The reality is Donald Trump is gingerly sidestepping the very man who is so publicly “hailing” him. In a New York Times interview this week, he said : “I condemn them. I disavow and condem.” Spencer says he’s not surprised. “I’m definitely excited about Donald Trump. We celebrated. This is the morning after and we are sobering up. There is a definite possibility that Trump could really disappoint us.”

So what does Richard Spencer’s ideal world look like? “I hope that one day all Europeans can be united. That we could revive something like the Roman Empire. Having a state that is for us, that is always going to be for us. Jews have such a state. It’s called Israel. There are many Muslims who are attempting to build such a state, a caliphate. We really need to think of ourselves as a civilization and a people.”

Spencer says it was on a TTC bus, when he lived in Toronto, that he looked around and realized he was the only white person. “It’s not the kind of place I want to live. I don’t want my child or my grandchild to be in a situation where they feel alone, where they feel that everyone around them doesn’t trust them. Being a minority is very difficult. We have recognized this when we look at other minorities, and yet we, as white people, seem to want to become minorities in our own homeland. It’s a very odd thing.”

Profile pieces on Richard Spencer come under criticism for mentioning his looks and his charm. But, like many notorious leaders of the past, he possesses a disarming charisma that can normalize his beliefs.

Barbara Perry has conducted one of the only large-scale research papers on the white supremacist movement in Canada. She says Richard Spencer is the new-and-improved white supremacist, the kind who has a charm that is dangerous. “There is not much difference in the rhetoric or ideologies. The difference is how they present that in a way that appeals to more people and isn’t as frightening as the black-booted neo-Nazis. They carry that same thread of white nationalism, very often anti-Semitism, homophobia. The difference is they are couching that in a much more professional presentation.”

Perry’s research, conducted through the University of Ontario Institute of Technology, has identified more than 100 hate groups operating in Canada, most of them in Quebec and Ontario. But she says the strength of the movement isn’t from the size of the rally, but the online hits. “We saw much more online chatter leading up to and after the election. Newcomers [are asking], ‘What are these people saying, what is the message they are sending, do you they have answers for why my life seems to have gone awry?’ ”

Perry says the legitimizing of the alt-right south of the border has definitely migrated north. “It’s really facing us head-on now. It’s spilled over. It’s a porous border. Especially when we are talking about language and speech.” Perry believes it’s important to shine a light on these views and to talk about them. Her research students are doing workshops in schools right now to educate teens about right-wing extremism. “The students are lapping it up. They are appalled and shocked but also very engaged and want to know what can they do.”

Richard Spencer and I Skype for about half an hour. He talks about how he wakes up in the morning feeling not hateful toward others, but hopeful for his “big dream.” He claims not to incite violence and believes it is the immigration policies of the U.S., U.K. and Canada that will lead to “blood and tears.” “I have no problem dealing with individuals,” he says. “But do we really trust each other? Do we really love one another? I am afraid the answer is no.”

I ask him what his mum and dad, who are somewhere in the house getting ready for the Thanksgiving holiday, think about his views. He pauses and says: “They think I’m a bit crazy, just like the rest of the world, right? They are okay with it, in the sense they are not going to reject me. I’m sure they, like the rest of the world, are saying, ‘Oh, what is Richard doing?’ ”

I say goodbye. He tells me he hopes he gets to see me again. I thank him for the interview. And then he sends me a text: “Hail Avery.”

Avery Haines is a reporter, anchor and host for CityNews in Toronto.