The case for optimism in the Arab world

The Arab Spring is not over. It has barely begun—fueled by a youth movement that will bring down the old order, one way or another 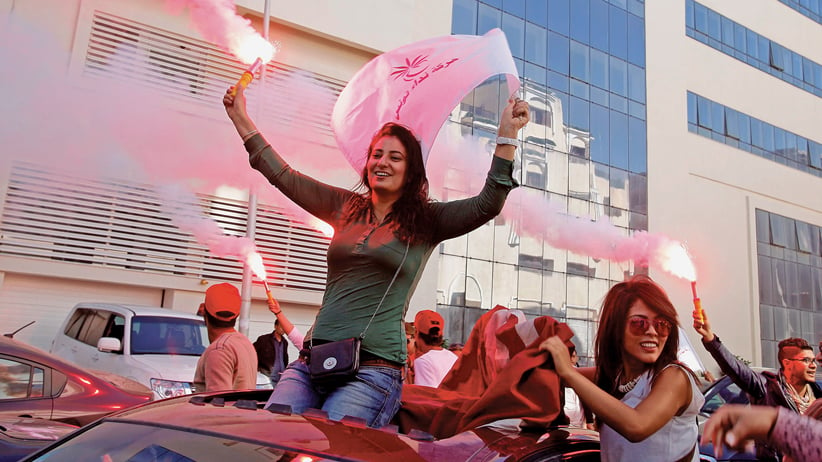 For Bread and Freedom.

Six years ago this month, after millions of Egyptians rose up in the streets of Cairo, the decrepit regime of Hosni Mubarak finally collapsed. The Arab Spring bloomed into flower throughout the Levant and across North Africa in a chanted chorus: For bread and freedom.

It was a glorious moment in time, but now, except for the triumph in Tunisia where the Arab Spring’s preamble was written, it’s all death, despair and millions of trudging refugees. From Iraq to Algeria, and from Egypt to Yemen and around to Bahrain, all is wreckage and bedlam and defeat. Except it isn’t.

It’s not over. It’s barely even begun.

The Arab Spring was as much a youth revolution as a rebellion for work, wages and liberty, and the kids have not given up. They’ve hardly even started.  The great hopes that were midwifed at the mass protest rallies in Cairo’s Tahrir Square six years ago have not been dashed by the triple heartbreaks of reactionary Islamist savagery, police-state repression by nightstick and barrel bomb, and the callous indifference of the affluent western democracies.

Nearly two-thirds of the region’s Arabs are under the age of 25. They’re the most outward-looking, cosmopolitan and best-educated generation in Arab history. Demographic trends alone have already determined that they will not be held back, and according to all the polling data across the region—from the Arab Barometer, the Pew Foundation, the World Bank and the rest —democracy is how young Arabs see the way forward. Young women are taking on a new militancy and confidence against their traditional subordination. Among young men, attitudes about obedience and deference are in upheaval. Among young people generally, some polls have put the will to democracy at 92 per cent.

As would be expected in countries with press freedom rankings at the lowest rungs in the world, there’s much muddled thinking and conspiracy theory—Israel is to blame for everything, the Islamic State’s rampaging is solely due to the 2003 Anglo-American invasion of Iraq, and so on. But the machinery of censorship and propaganda, already losing the technological arms race to under-the-radar digital media, has now pretty well lost the battle for the hearts and minds of young Arabs.

A great deal of muddled thinking also distorts the way Arabs are seen in the western democracies. The “Arab youth bulge” is routinely apprehended as a harbinger of listless, semi-literate young men malingering in the cities, nursing their grievances and signing up for jihad at the first opportunity. That worry isn’t wholly unreasonable, but if it’s only a security lens you’re looking through, that’s all you’ll see.

The University of Waterloo associate professor Bessma Momani, author of Arab Dawn: Arab Youth and the Demographic Dividend They Will Bring, sees something else in the Middle East, “a young region full of hope, ready for progress, and eager for a bright and prosperous future.”

The evidence for long-term optimism is sound and persuasive, even against the backdrop of the dreary headlines that have dominated the news from the Middle East since those heady days in February six years ago.

The cunning strongman Abdel Fattah el-Sisi is tightening the counter-revolutionary grip on Egypt that he’s been exerting ever since a second-round Arab Spring uprising in 2013 brought down the brief but brutal Muslim Brotherhood government of Mohamed Morsi. In Iraq, February 2011 was marked by the murder and mass arrest of protesters who challenged the corrupt and sectarian Nouri al-Maliki, whose theft of the presidential elections a few months earlier had been approved by Barack Obama’s White House. Maliki cracked down harder, imprisoning journalists, intellectuals and opposition leaders. Iraq’s Sunnis then rose up in arms, and after a downhill slide of six years the Islamic State’s maniacs are only now being rousted from Mosul.

In Libya, the protesters who rose up against the lunatic Muammar Gaddafi in 2011 had to be defended by fighter jets from NATO and the Arab League in an intervention authorized by the UN Security Council, but after the “international community” walked away, the country split into competing power blocs and is now more or less a failed state. Still, it could have been incalculably worse. In Syria, what began in February 2011 as a non-violent, pro-democracy Arab Spring protest movement was crushed by Bashar Assad. In the absence of any effective outside intervention, nearly half a million Syrians have been killed so far. Most of Syria’s population is either homeless or scattered into UN camps in the worst refugee crisis since the Second World War.

In Yemen, an Arab Spring protest movement was launched in Sana’a to end the 30-year reign of Ali Abdullah Saleh, but after efforts at reconciliation by the Gulf Cooperation Council failed, a full-scale civil war broke out in 2015, and Saudi fighter jets began pounding Iranian-allied Houthi rebels. The cost so far: at least 10,000 lives, along with $14 billion in destroyed infrastructure and related economic losses.

The Saudis snuffed out a peaceful Arab Spring revolt in Bahrain, too, and a Palestinian effort was quickly put down by Hamas and the Palestinian Authority. Jordan and Lebanon are straining under the weight of millions of uprooted Syrians, the slump in oil prices is biting into several Arab economies, and young Arab men are streaming out of the region not just as war refugees but as economic migrants. On the eve of the Arab Spring, the region’s youth unemployment rate was at 27 per cent. Now it’s 30 per cent.

Still, Momani’s case for long-term optimism rests on persuasive evidence. The main thing is that the police-state autocrats and theocrats are simply dying off, and young Arabs have learned some precious lessons. If you can’t hold a mass meeting in the town square, you can convene it online. If non-violent uprisings are put down by brute force, there is still a way forward in entrepreneurial ingenuity, in the expansion of networks independent of mosque and state, and in what Momani calls the inevitable outcome of intergenerational transformation.

Young Arabs are getting smarter. College and university enrolment rates are on a steeply upward curve. In Jordan, Tunisia, Saudi Arabia and the Palestinian territories, the post-secondary enrolment rate has more than doubled in the last 20 years. Another lesson: don’t put your trust in outsiders, least of all Americans. That’s doubly true now that Donald Trump is their president.

Across the region, young Arabs are sick to death of Sunni-Shia incitements. The Islamic State is almost universally loathed, and the Muslim Brotherhood’s disastrous interregnum in Egypt will be remembered. The Arab majority now tends to regard religion as a strictly a private matter. This is most noticeable among young people, but it also the case among Arabs who identify as devout Muslims.

While support for what is known in western democracies as “sharia law” remains high even among young democrats, its stereotype of incorrigible enthusiasm for public beheadings and the stoning of errant women just doesn’t hold up. Sharia is increasingly understood to be a suitable legal basis for adjudicating inheritance and property law, ideally functioning alongside democratic norms.

With their higher rates of university degrees, Arabs have also come to learn that an education alone isn’t going to get you a job. In Egypt, a third of university graduates are jobless. Among workers with less than a primary education, only two per cent are unemployed, but the jobs on offer are menial, wage-slave arrangements.

Whether oil rich or dirt poor, the Arab states are going to have to grow their economies by more than 90 million jobs in the next dozen years or so, just to keep their unemployment rates from rising even higher. Job growth like that is not going to come from the old systems of cronyism, indentured guest-worker labour, official sinecures, the allotment of government jobs and the complex methods of bribery management and baksheesh that have been keeping the elites in power.

The old Arab establishment no longer holds the advantage. The demographic revolution alone is seeing to that. The old order will yield the easy way or the hard way, but it will yield, as it must always and everywhere, to the demands for work, wages and liberty.

For bread and freedom.