The Cola Road, Week 1: How Coke crates could save lives

Claire Ward is a former associate editor at Maclean’s and is pursuing a Master’s in news and documentary at New York University. For the next five weeks, she will be blogging from Zambia, where she is filming The Cola Road, a documentary that follows the launch of the first aid program that aims to use Coca-Cola’s distribution network to deliver medicines to the remotest corners of the developing world. Check out more updates from The Cola Road on Facebook at: www.facebook.com/TheColaRoad or Twitter at: www.twitter.com/TheColaRoad. Or follow Claire on Twitter @thementalward 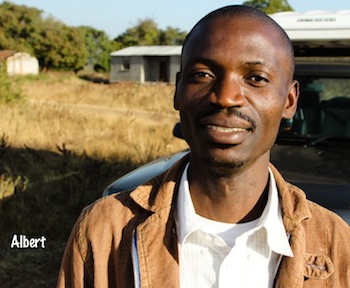 “Claire, are you enjoying?” says Albert, in sing-song Zambian English. He’s passed me a handful of “African apples”—tart, cherry-sized fruit that are crunchy and addictive—as we pull away from a roadside market town along the Great East Road in Zambia. The town is filled with stalls displaying brightly coloured textiles, hand-woven baskets and fresh fish drying on grills; meandering goats and pigs wobble in front of cars slowly making their way toward the bridge across the Luangwa river. What was once a Coca Cola container houses a makeshift mobile phone shop that also sells soft drinks. As we drive off, Albert points out the approaching hills of Mozambique. “Yes Albert, I am enjoying!” I declare—it’s true: these roadside fruits put to shame the varieties I pull off the shelves at the bodegas back in New York. “So have you decided to stay with us in Zambia?” he says, smiling. It’s a passing comment, but it tugs at an inner struggle of mine—am I just another mzungu (read: white person) taking a fleeting interest in his country’s troubles? I shrug good-naturedly, my cheeks full of African apples, trying not to choke as we dive into the next crater-sized pothole.

Albert is a thirty-something social worker for Keepers Zambia, a Lusaka-based NGO that has partnered with Colalife, the subject of the documentary I’ve come here to film. A year ago, I wrote an article for Maclean’s about this up-and-coming U.K. charity, which wants to piggy-back on Coca-Cola’s far-reaching distribution network in the developing world to distribute medical supplies to far-flung rural areas. The basic premise: Coke gets everywhere, aid doesn’t; so why not pack those crates of pop with medicines? Colalife came up with a wedge-shaped container—which they christened the “Aidpod”—that fits between rows of Coke bottles. When I interviewed Colalife co-founder Simon Berry at the time, the project was still in a highly theoretical phase, but I knew I’d be revisiting this story as it evolved.

Cut to today, I’m in the back of  a Landrover, with Simon behind the wheel and Albert to his left (a remnant of British colonial days—cars drive on the left side of the road). My fellow cameraman Guy and I are in the back, attempting to hold the camera steady as we barrel down the tarmac lined with people walking, many of them barefoot, for miles and miles between villages. We’re heading out to one of the outlying rural districts that Colalife has targeted for its upcoming trial run—officially known as COTZ, or Colalife Operational Trial Zambia. I’ve been in Zambia for one week so far—the first of five—tailing Simon and his wife, Jane, the project-managing powerhouse, as they work out the last-minute details of their ambitious first attempt at a public-private partnership that has captured the imagination of a growing sliver of the global public health community. The proposition is to stuff the Aidpods with packets of  –pardon another acronym– ORS, or oral rehydration salts, and zinc tablets. The Aidpod is an innovation unto itself, designed to be a reusable measuring device for mixing ORS in the right quantities. 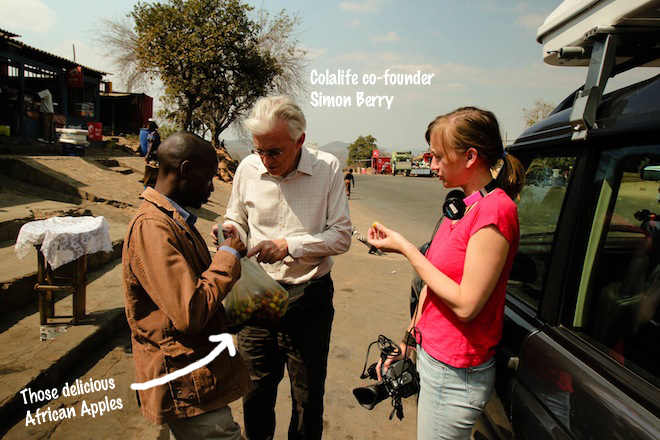 The salts and zinc tablets are meant to save the lives –or at least improve the chances of survival– of the one in seven children under the age of five who are die from dehydration caused by diarrhea in the developing world. In 2009, the World Health Organization published a report recommending diarrhea treatment kits for new mothers, saying that market forces could be used to deliver those kits in innovative ways. Enter Colalife. The COTZ trial run, which kicks off this September, is a 12-month program operating in two districts, Katete and Kalomo, where trucks will deliver the Aidpods to wholesalers, who will in turn stuff them into Coca-Cola crates for rural retailers to cart out to their respective communities. The Aidpods will have a sticker price of $1U.S. but Colalife’s team will initially hand out thousands of vouchers for anti-diahrrea kits to build demand. Retailers, on the other hand, can get their money out of the sale by redeeming the vouchers via mobile banking — something Colalife hopes will provide an incentive for them to stock their shelves with the kits. 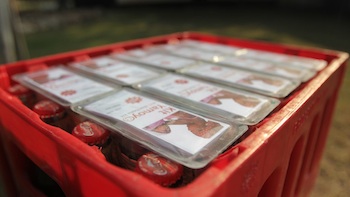 The image of these Aidpods—which now have a local name, Kit Yamoyo (“Kit of Life”)—snuggled in between glass bottles of Coca-Cola tumbling along the dusty countryside in has become something of a romantic metaphor for what Colalife is actually doing. Down the food chain, so to speak, at the level where Aidpods get into the hands of families who need them, Coca-Cola Co. isn’t even a part of the equation. There’s no funding from corporate headquarters; instead, Colalife seems to be borrowing lessons from the company’s formidable marketing strategies and distribution know-how. And at no point are the two products—Kit Yamoyo and Coke bottles—associated once they hit the shelves of retailers.

The Great East Road leads us to Katete, where the dominant mode of transit appears to be ox cart or bicycle. Chicken coops are parked along the side of the road, which is spackled with tufts of cotton from nearby fields. Music pumps out of bars and little shops and it seems like everyone is outside, enjoying the “cool” (25 C) dry weather. At one point, after visiting the local wholesaler, our eyes fix on a young man cycling up to return a crate of empty Coca-Cola bottles and get a new one—he likely came from a neighbouring rural community, which makes him exactly Colalife’s target retailer. 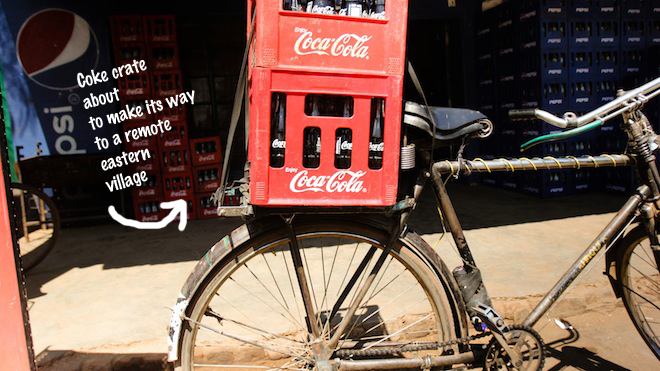 In the documentary world, this is one of those brilliant moments of unexpected “verité” where real life suddenly takes over directed exposition. In a hurry to capture all the angles before the transaction was over, I fail to get out from behind the camera to introduce myself. He cycles off before I know it—and I miss the chance to explain what we’re doing. Now here’s the ethical dilemma: Can I use that footage, given that I didn’t get his consent? Is it fair to point the camera at anyone in public to help illustrate my vision for a documentary? As journalists and documentarians, we can too easily cast our sources and subjects against a backdrop we’ve painted outside their view. Albert’s words ring in my head. “So have you decided to stay in Zambia?” Or am I just another mzungu passing through with a camera and a guilt complex?

Next week: we visit Coke’s bottling plant, Pharmanova, the local pharmaceutical company who manufactures the ORS, and meet the monitoring and evaluation team who will help make the trial run produce meaningful statistical data. Oh, and we may venture down to Victoria Falls in Livingstone for a camera-rigged bungee jump. Stay tuned!