The day the Penguins stood with Trump

Allen Abel reports from the White House on Trump hosting Henry Kissinger, a sheepish Sidney Crosby and the man who called the president a moron 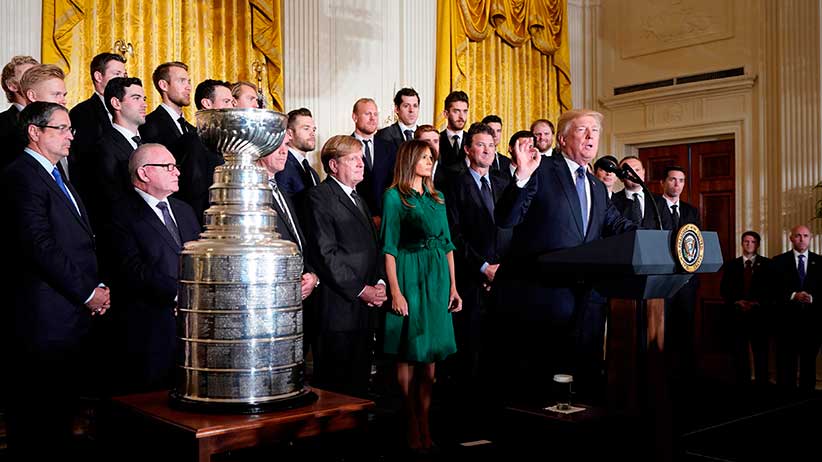 President Donald Trump, who at this point in his first term is about as likely to be awarded the Nobel Peace Prize as is he to win the Conn Smythe Trophy, welcomed laureates from both leagues to the White House Tuesday, absorbing foreign-policy advice from Henry Kissinger before hosting the Pittsburgh Penguins in a slap-happy fun fest that cast the multi-national, multi-year Stanley Cup champions as blithe, blissful, and—in some eyes—politically blind.

Looking relaxed and glib in the East Room after partaking of a private luncheon with the same Secretary of State who has not publicly denied that he called his own Commander-in-Chief a moron, Trump praised Mario Lemieux’s golf game and shouted out to a sheepish, blushing Sidney Crosby, who had secreted himself at the west end of the back row of players, as far from the president as he possibly could position himself without tumbling off the riser into the Grand Foyer.

WATCH: Penguins Coach Mike Sullivan on the right of athletes to protest

Trump lamented the Penguins’ domination of his hometown New York Rangers—who have won the Cup exactly once since The Donald was born in 1946—uncharitably dubbed Crosby and Evgeny Malkin as “the two-headed monster,” and labelled the Penguins as “true, true champions and incredible patriots,” though he didn’t specify toward which of their native countries—Canada, Russia, Sweden, Finland, Germany or the United States—their praiseworthy fealty was directed.

A crowd of Pittsburghers and Pennsylvania politicos jammed the gilded chamber, chanting and cheering their heroes, who, in a marked break with tradition, neither presented a team jersey or other gift to the president during the ceremony nor posed with him beside the gleaming Cup. Trump was not seen to touch the fabled mug, but its magic rubbed off on him nonetheless. Had the Penguins fallen in last spring’s final to the Nashville Predators, the president would have had to invite Tennessee’s Bob Corker, the same Senator who has called the Trump White House “an adult day-care center” and accused the president of leading his nation to the brink of World War Three.

RELATED: How Donald Trump’s past with pro football revealed his true self

National Hockey League President Gary Bettman, who was front and centre when the Penguins visited Barack Obama last October, skipped the White House to attend the first home game of the Vegas Golden Knights in that shining, shattered city. And Pittsburgh’s mayor, Bill Peduto, conspicuously boycotted the event, crowing that he “would take a knee on this one and stay home.” Crosby stood in the first row in 2016.

(This was hardly the first spat between Peduto and Trump, who, as he abnegated U.S. participation in the Paris Climate Accord, snarled that “I was elected to represent the citizens of Pittsburgh, not Paris.” “Fact: Hillary Clinton received 80% of the vote in Pittsburgh,” Peduto tweeted back. “Pittsburgh stands with the world.”)

On this day, at least, it was enough for the president that the Penguins stood with Trump.

“Everybody wanted to be here today,” Trump beamed, glancing back at the hockey team and at his First Lady, who was wearing a dress of the same vivid green as the pants of the late, lamented California Golden Seals. “And I know why.”

The Penguins were not the first sports team to visit Trump’s geriatric nursery. But the Clemson University football Tigers, New England Patriots and Chicago Cubs, minus numerous noteworthy defectors, came to Washington before the president embarked on his viciously divisive and apparently successful campaign to flag-slag any athlete who sits, kneels, slouches or disrespectfully gesticulates during the national anthem. (National Football League president Roger Goodell wrote to club owners Tuesday that, “Like many of our fans, we believe that everyone should stand for the National Anthem. It is an important moment in our game.”)

“We’ve stated clearly from the get-go that our visit to the White House is not political,” an unsmiling and defensive Penguin coach Mike Sullivan, a Massachusetts native, told reporters outside the Oval Office following his team’s appearance with the triumphant Trump. “Nobody is choosing a side. Nobody is taking a stance.”

“Sidney, do you know how to win or what?” Trump jibed at Crosby, but Sid the Kid did not speak from the stage or West Wing podium on Tuesday, thus affirming the views of his recent detractors that, even in this hour of ferment, he does not know how to talk.

“I can’t speak for everyone else, but I just grew up under the assumption that it wasn’t something really brought into sports,” Crosby offered two days before the Washington trip, abjuring politics altogether.  This young season, only Tampa Bay Lightning forward J. T. Brown, an African-American from Minnesota and the son of a former NFL player, has made an overt show of protest during the performance of The Star-Spangled Banner.

“You embody the values of dedication, discipline, and hard work,” Trump told the Penguins Tuesday. “To every young American watching today, we encourage you to always strive to be your best, to do your best and to give your all.” (In at least recognizing Lemieux, he exceeded President George H.W. Bush, who greeted the Pens when they won the Stanley Cup for the first time in 1991. “Believe me, he didn’t have any idea who I was,” Lemieux said that day.) But Trump saved his warmest words for Ron Burkle, the billionaire who, with Lemieux, owns the Stanley Cup champs.

Meanwhile, the indestructible Kissinger, whose age exceeds Crosby’s uniform number by seven, made only a few remarks preceding his appointment with Trump, saying only that “It’s always a great honor to be in this office, and I’m here at a moment when the opportunity to build a constructive, peaceful world order is very great. And the president is leaving on a trip to Asia, which I think will make a big contribution to progress and peace and prosperity.”

Trump will travel in early November to China, Vietnam, Japan, the Philippines and South Korea, well within missile range of his arch-nemesis, Rocket Man. He frequently has sought Kissinger’s advice on foreign relations, though it is not known whether their latest meeting included a discussion of Kissinger’s his own famous genuflection of August, 1974, when, as journalists Carl Bernstein and Bob Woodward reported in their book The Final Days, he and Richard Nixon famously took a knee, prayed, and wept together in the Lincoln Sitting Room on the eve of Nixon’s resignation.

“’What have I done? What has happened?’” Bernstein and Woodward reported Nixon sobbing as Kissinger knelt beside him. “Kissinger touched the President, and then held him, tried to console him, to bring rest and peace to the man who was curled on the carpet like a child.”

“Usually I say, ‘Have you ever been in the Oval Office?’” another president said Tuesday, sitting with the same man. “And with Henry Kissinger, I didn’t bother asking that question.”