The death of democracy in Turkey

Adnan R. Khan reports from Turkey on the disputed referendum and the dangerous rise of the cult of President Erdogan

On Sunday, the day more than 50 million voters cast their ballots in a constitutional referendum proposing the most fundamental shift in Turkish politics since its inception more than nine decades ago, the mood among the ‘Yes’ camp was boisterous. Turkish President Recep Tayyip Erdogan, the man who had led Turkey’s conservatives out of the secular darkness, was poised to become the uncontested king of a nation perpetually on the cusp of chaos.

The constitutional changes up for popular ratification included abolishing Turkey’s parliamentary system, removing the office of the Prime Minister, and transforming the titular presidency into an overlordship, invested with the power to appoint judges, issue decrees without parliamentary approval, and dissolve Parliament. It signalled, by any sane measure, an end to Turkey’s perennial tryst with democracy.

Still, Erdogan’s supporters cheered, doffing all pretence of strengthening Turkey’s democratic credentials through a process of centralization, a fiction the ruling AK Party had peddled throughout its referendum campaign. That Turkey needed a strong centre to overcome the internal and external forces attempting to tear it apart was not the theme Erdogan supporters took up on referendum day. What Turkey needed, they said, was Erdogan.

“People say if Erdogan wins the referendum he will be able to do whatever he wants without checks and balances,” Mesut Öncel, a 67-year-old street vendor said. “But it’s funny because he can already do whatever he wants. That’s not the point. The point is with the constitutional changes there will be no more stupid discussions at the Parliament. Erdogan will make a decision and it will be done.”

The hero worship reached fever pitch as the results poured in. Preliminary counting showed the ‘Yes’ side up by a seemingly insurmountable 77 per cent. But slowly, the ‘No’ side began to gain ground. By 8 p.m. local time, three hours after polls closed, the margin had contracted to less than two per cent. And it was narrowing. Still, tens of thousands of Erdogan supporters flooded Istanbul’s streets, smelling victory. They sang the anthem dedicated to their leader, composed in the aftermath of the failed coup attempt in July 2016. “Re-cep Tay-yip Er-do-gan!” they bellowed, over and over again, waving Turkish flags and launching fireworks.

‘No’ supporters watched the apotheosis with increasing dread. Huda Kaya, the motherly 56-year-old parliamentary deputy from the opposition Peoples’ Democratic Party, or HDP, sat stunned in her party’s Istanbul office, staring despondently at a television. The HDP has suffered the sharp end of Erdogan’s purge of political enemies since last year’s coup attempt. Its charismatic leader, Selahattin Demirtas, was jailed in November, accused of a host of terrorism-related offences, including promoting a terrorist organization. The emergency law that has been in place since the end of July 2016 has disproportionally affected the HDP, preventing it from campaigning in support of the ‘No’ campaign in the lead-up to the referendum.

“This referendum has been unfair from the beginning,” she told Maclean’s, even as the counting continued. “All state resources were marshalled in support of the ‘Yes’ vote. We were not allowed to set up our booths, or if we did, we were intimidated by the police, who support the AK Party. We were prevented from campaigning.” 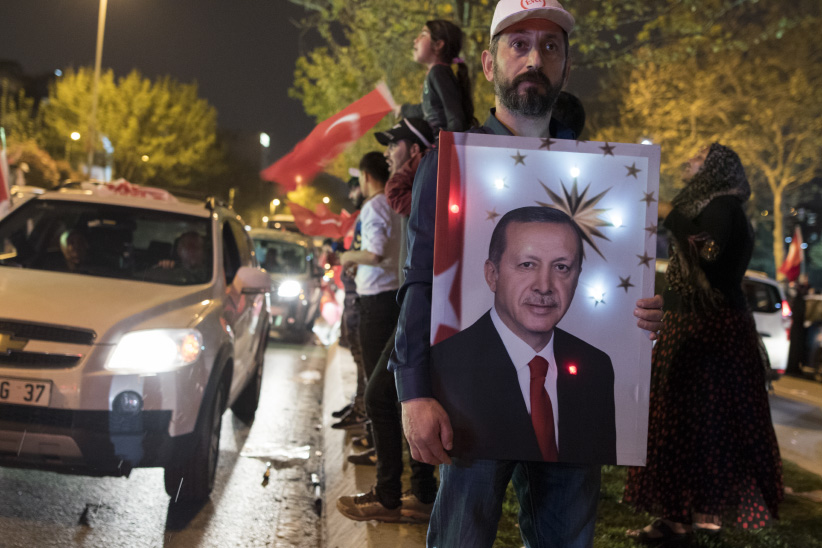 Supporters of Turkish President Recep Tayyip Erdogan celebrate his victory in a constitutional referendum. Amendments to Turkey’s constitution will concentrate power in the presidency, ensuring Erdogan’s dominance over Turkish politics for the foreseeable future. (Photograph by Adnan Khan)

She recounted story after story of threats and bureaucratic obstacles that were thrown in the HDP’s path: police who would cut down ‘Hayir’ banners as soon as they were put up (‘hayir’ means ‘no’ in Turkish), requests to mount rallies that were denied by AK Party-aligned local authorities, citing the emergency law and security concerns. In one instance, she said, police pressured the owner of a building to remove a ‘Hayir’ banner he had put up on his property in the southeastern city of Sanliurfa, because Erdogan was scheduled to hold a rally nearby.

“What kind of president can’t even handle a single ‘No’ flag,” she said. “For western society, it is hard to understand this kind of referendum: attacks and arrests, media blocked, rallies blocked. It’s a referendum under duress.”

In a scathing report published on April 7, the European Office for Democratic Institutions and Human Rights, which sent an observer team to Turkey to monitor the campaign and voting, agreed with Kaya. It noted the backdrop to the vote was anything but fair, citing the state of emergency, detention of journalists and disproportionate access to state resources allotted to the ‘Yes’ campaign, among other irregularities.

The HDP was the first opposition party to announce it would be challenging the referendum results, claiming as much of two-thirds of the ballots should be discounted. The Republican People’s Party, or CHP, the largest opposition bloc, took similar steps, announcing it would be mounting a protest against 60 per cent of the ballots, many of which its leader Kemal Kilicdaroglu said were counted despite not having the official stamp of Turkey’s High Election Council on them.

‘No’ supporters vented their frustrations on the streets, marching on the offices of the High Election Council’s offices in Istanbul’s Besiktas district in the early hours of Monday morning and gathering in other parts of the city to proclaim that the referendum had been stolen from them.

The protests remained largely peaceful, but Turks woke up on Monday morning to a nation more divided than ever. In the cafes and teashops crowding Istanbul’s warren of streets and alleyways, the talk ranged from whether Turkey can recover from the flood of traumas it has suffered over the past few years to whether Erdogan can be the uniting figure he has promised to be. Some questioned the logic of a vote that reduced so many issues into a simple ‘Yes’ or ‘No’ choice.

“This referendum was not just about constitutional changes,” Lami Bertran Tokuzlu, an expert on constitutional law at Istanbul’s Bilgi University said. “AK Party leaders deliberately sent a confusing message, sometimes referring to the Kurds as terrorists, other times promising them autonomy. They attacked Europe, which has nothing to do with the amendments but plays well with their supporters.”

“This is a vote of trust,” Ercan Argüç, president of a youth organization in the pro-Erdogan Tophane district of Istanbul, said. “We trust Turkey in [Erdogan’s] hands. More than 50 per cent of the people voted for him, so democracy is served. This new system will remove some of the obstacles standing in Erdogan’s way, the institutions that were preventing him from implementing his plan. Now his hands are free.”

For Kaya, the HDP deputy, and many others, those attitudes reek of a creeping populist authoritarianism. The politics of emotion have always served strongmen well, she says, pointing out that Saddam Hussein ascended to power in Iraq in 1979 at a period in Iraq’s history when threats to the central government seemed to lurk behind every corner. Hafez al-Assad, the father of current Syrian president Bashar al-Assad, rode the wave of Ba’athist pan-Arabism to power and used it to eliminate his enemies.

“Please,” she implored. “I beg the west to not let Turkey become another Iraq or another Syria. Help us.”