The distorted world of the Donald Trump 'reality' show

How the cheap, scripted and retrograde 'Reality TV' boom lowered the celebrity bar and gave the world the next U.S. president 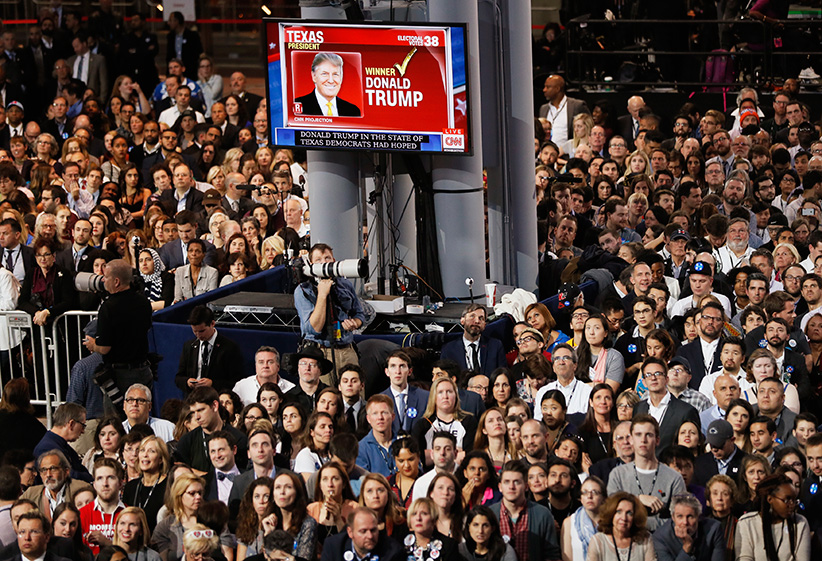 The 1996 U.S. Telecommunications Act rarely comes up when people try to make sense of the surreal spectacle of a U.S. president-elect who misrepresents reality, views the world in terms of “winners” and “losers” and can’t stay out of the spotlight.

But Telcom ’96 paved way legislatively for the rise of a vulgar, narcissist bloviator in the Oval Office. The legislation allowed media companies to merge at unprecedented rates, which in turn ushered in a proliferation of the cheap-to-produce tabloid format, in print and TV. That lead to the “reality TV” terrarium that alchemized Donald Trump into a credible businessman while whetting public appetite for corrosive, blunt-force spectacle.

It’s a genre that doesn’t put a high premium on originality—or nuance. The first U.S. network reality show, Survivor, a copy of a successful Swedish program, arrived in 2000. It was a corporate platform, a way to test the power of cross-promotion created by the 1999 Infinity-Viacom-CBS merger. And it was a huge success. Viewers flocked to the Darwinian, survival-of-the-canniest spectacle featuring half-naked contestants eating bugs and forming alliances to win a million-dollar prize.

Reality TV is far cheaper to produce than traditional, scripted TV. But it too is staged and manipulated to create a fictionalized “reality” viewers have to buy into, even if they know it’s fake. The genre also lowered the “celebrity” bar to include shameless non-achievers distinguished by their ability to provoke, enrage and entertain. This new celebrity caste would prove useful in filling the pages of the growing number of “celebrity-centric” magazines. Again, economics was the driver. Jersey Shore’s Snooki became newsworthy in good part because photos of her were cheaper to procure than those of, say, Tom Cruise or Angelina Jolie.

It was this faux “reality” format that transformed Trump from a public joke—a “short-fingered vulgarian,” as Spy famously dubbed him in 1988—into a successful “real estate tycoon” arbitrating business talent on The Apprentice, which went to air in 2004 and ran for 14 seasons. The show was billed “The ultimate job interview,” a line that now reads as chilling foreshadowing.

Until then, Trump was New York City’s cartoonish id, a gossip-page fixture with a gold-plate fetish. The Apprentice itself was a ratings loser, with viewership plummeting each season. It was saved by the product placement sprinkled through its “challenges”— from Chrysler to Ivanka Trump’s clothing line. These sponsorships netted NBC millions per episode; the network kept The Apprentice, and later Celebrity Apprentice, on air not because viewers loved them but because they were cash cows. It’s a model Trump appears to be taking with him to the White House. Already it’s clear the next Trump reality show is taking place in the marbled lobby of Trump Tower in New York. It’s where the president-elect showed up with his “friend” Kanye West. And where far-right French candidate Marine LePen was spotted having coffee on Thursday morning.

The prescient 2010 book Reality Bites Back: The Troubling Truth About Guilty Pleasure TV, exposed both the genre’s fakery and its pernicious cultural effect. In it, author Jennifer Pozner explains “Frankenbytes,” reality-TV slang for splicing conversations together and creating fraudulent new ones, and the ways the industry uses stock characters that reinforce sexist, classist and racist stereotypes. She also describes a form of backstage tyranny: contestants being put under gag orders, subjected to gruelling and cruel working conditions, including being plied with alcohol to induce outrageous ratings-grabbing behaviour.

The genre itself isn’t the problem, Pozner says, noting shows like Project Runway and The Amazing Race champion creativity and ingenuity. The problem is how “reality TV” distorts “reality,” particularly in terms of the depiction of women. It arrived just as women were breaking new barriers and Olympic world records to serve up a  retro, ’50s-style world view largely focused on young women who betrayed and fought with one another when they weren’t shopping for husbands, designer bags or getting cosmetic surgery. The theme met its apotheosis in the wildly successful Real Housewives franchise, in which Melania Trump would fit nicely. The glossy spectacle provided an antidote, even a narcotic, amid societal unrest: national job loss, social and class anxiety and class inequity.

The program became a proxy for Western culture, ripe for parody, as we saw recently in a sketch on a BBC comedy show, “Real Housewives of ISIS,”  which generated predictable outrage. Instead of Western “housewives” engaged in white-wine-fuelled fights and shopping sprees, the show presents “housewives” in burkas—young British women lured into marriage by ISIS members—modelling suicide vests and joking about beheadings.

It’s a mark of how normalized reality-TV has become that, amid the calls to boycott Trump-related products, no one has called for one on the genre that helped create him. When Fox’s Who Wants to Marry a Multi-Millionaire premiered in 2000, its retrograde premise met with outrage. Now The Bachelor and The Bachelorette are seen as harmless, guilty-pleasure TV viewed “ironically” by many of the same people horrified by Trump’s rise.

The warnings have been there. The 2001 black comedy Series 7: The Contenders featured reality-show contestants armed with guns to hunt down opponents, then murder them in front of the cameras. In a 2010 interview with Maclean’s, Pozner spoke of reality TV stoking viewer appetite for increasingly provocative and bigoted fare: “They have to go further and further, more racist, more misogynistic, more over-the-top,” she said, four years before Here Comes Honey Boo-Boo. “We will see more of that if we don’t become very critical very quickly.” Meryl Streep uttered a similar warning about exposure to coarsened discourse and behaviour at the Golden Globe Awards this week: “Disrespect invites disrespect, violence incites violence,” she said.

President Barack Obama also called out the consequence of distorted reality in his final address this week: “It’s not just dishonest, this selective sorting of the facts; it’s self-defeating,” he said. “Because as my mother used to tell me, reality has a way of catching up with you.” He wasn’t talking about reality TV per se, but he could have been. As Trump approaches the White House, Survivor takes on brand new resonance.