'Run, hide, and tell.' What to do in the event of a terrorist attack

From the archives: In the wake of another tragedy, some paranoid yet useful advice from National Counter Terrorism Security Office 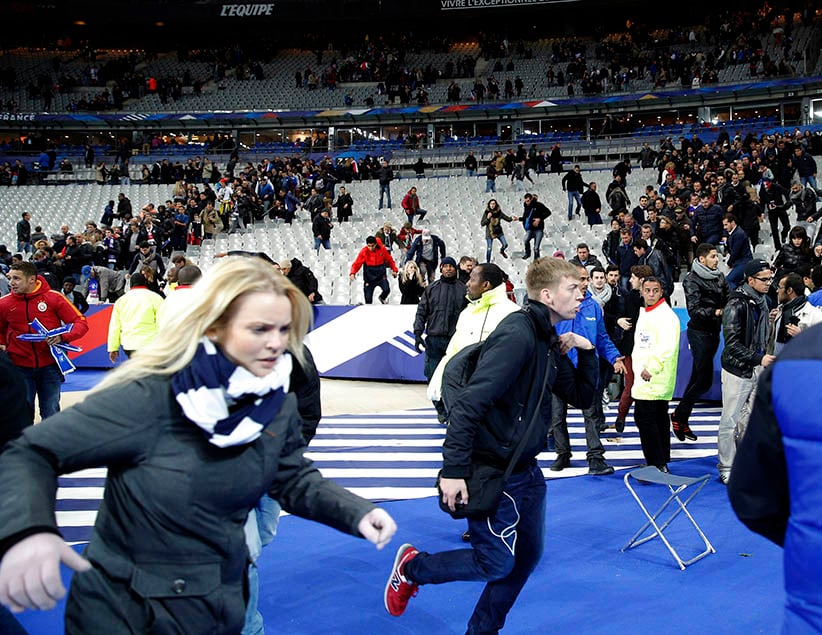 Hundreds of people spilled onto the field of the Stade de France stadium after explosions were heard nearby during a friendly match between the French and German national soccer teams on Nov. 13, 2015. (Christophe Ena/AP)

Plenty of official advice has been thrown at us over the years. And while the sheer volume of public service announcements may overwhelm, there’s no denying the impact a memorable catchphrase can have on societal behaviour. The safety suggestions listed above have become instinctive and useful aspects of everyday life.

As disheartening as it may be to ask the question, does “Run, hide and tell” belong on the list as well?

Last week, the National Counter Terrorism Security Office in Britain offered its citizens this simple but memorable bit of guidance in case they ever find themselves in the midst of a terrorist firearms attack similar to the one in Paris.

First: Run. “Escape if you can . . . [and] insist that others leave with you.” Second: Hide. “If you can’t run, hide . . . Find cover from gunfire such as substantial brickwork or heavy reinforced doors. Be quiet, silence your phone.” Finally: Tell. “What do the police need to know?” Relay such things as location, descriptions and casualties so the response can be appropriate and informed.

Like any piece of advice, “Run, hide and tell” requires repetition and a receptive audience. Last year, when British police handed out leaflets with this slogan in London’s subway system, they were widely ridiculed as engaging in needless fear-mongering; many Londoners tweeted sarcastic responses such as, “If you hear gunfire, leave the area . . . Gee, thanks for that.” Reaction to the revival of this advice in the wake of 130 deaths in Paris has not been nearly so flippant. And as remote as the possibility of a similar attack may seem in Canada, it can never be entirely dismissed, particularly given the shooting last year on Parliament Hill.

Recall that in the aftermath of 9/11, governments in North America actively reminded their citizens of their role in preventing future bombings. The RCMP has a long list of suggestions for spotting potential threats on its website under the heading “National security awareness.” This includes being on the lookout for explosives testing in secluded areas, unusual inquiries about security procedures and the appearance of unfamiliar street vendors. The U.S. has a similar, better-publicized program called “If you see something, say something” to encourage reporting of suspicious activities. As paranoid as such warnings may seem, they have all proven useful. Both the Shoe Bomber and Underwear Bomber were foiled by vigilant passengers and aircrew rather than trained security personnel.

What the recent assaults on Paris restaurants and the Bataclan music hall reveal, unfortunately, is that hidden explosive devices and random lone-wolf-style attacks are not the only threats posed by modern terrorists. If Islamic State continues to transform itself from a state-like presence in Syria and Iraq to an exporter of mass terrorism in Western countries, even vigilant citizens could find themselves in the midst of a deadly firefight in a public place.

And if so, what should you do? “Run, hide and tell” is a good start, although Canadians haven’t heard this from their government.

Now it may seem amusingly redundant to recommend that people run at the first sound of gunfire, but it’s no more obvious than to stop running and fall to the ground when your clothes catch fire. In the absence of any long-drilled nugget of advice, many people will simply freeze at the sudden and unfamiliar sound of shooting. This reaction is all the more likely given lockdown procedures familiar to grade school children in which the entire class cowers in one place without making any effort to escape or to contact the outside world.

Christine Tadhope, a British tourist attending the Bataclan concert, explained afterwards to the Telegraph how she survived while 89 fellow concert-goers lost their lives. When the shooting started “most people ducked,” she told the newspaper. “Their first instinct was to duck. I just said, ‘Run! Let’s get out of here.’ So we ran.” Along with a friend, Tadhope escaped the main hall and barricaded herself in a basement below the stage for the duration of the attack. They survived. Many of those who merely ducked or lay down were killed.

It’s a depressing reminder of our dangerous and unstable world that Ottawa needs to be encouraged to tell Canadians what to do if they find themselves in the middle of a shootout with terrorists. “Run, hide and tell” is certainly a much less palatable or uplifting public service announcement than “Be nice, clear your ice or “Get the flu shot.” But it is good and necessary advice nonetheless. And bears repeating.