The Editorial: The Paris attacks and the larger threat of Boko Haram 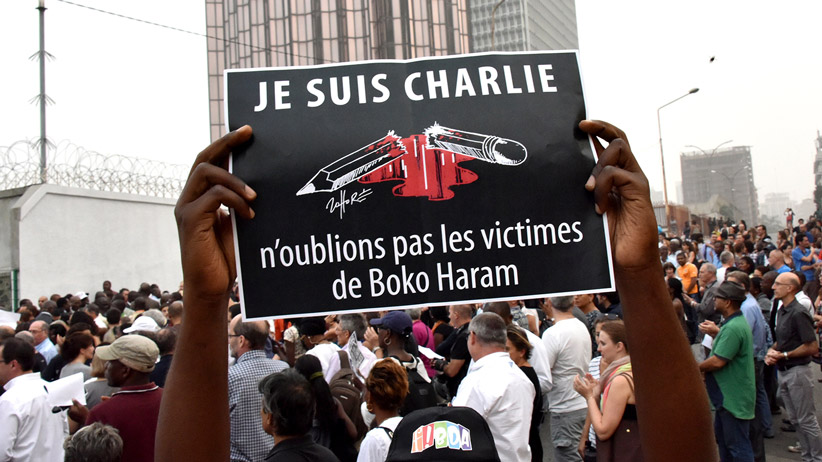 The attack on the Parisian offices of the magazine Charlie Hebdo, the story of which fills our pages this week, was echoed far away by an Islamic fundamentalist massacre in the Nigerian border town of Baga and its environs. Baga is the headquarters of the Nigerian government’s efforts to re-establish its authority in the state of Borno, where the notorious terror group Boko Haram, following its ideology of purging Western intellectual and cultural influences, has been trying to establish Muslim sharia law and the nucleus of a new universal caliphate.

Boko Haram appears to have descended on Baga and several other towns, massacring thousands of civilians and forcing the Nigerian army to retreat. Many fled with canoe-like boats to nearby Lake Chad, trying to escape into the neighbouring countries of Chad and Cameroon. Hundreds are still said to be trapped on an island in the middle of the lake, suffering from hunger and mosquito-borne illnesses as they await rescue.

The media was criticized for its coverage—or lack of coverage­—of this humanitarian disaster, the argument being less attention was paid to it than to the French attacks on fewer victims. Do Western media, some wondered, count Nigerian lives as being of less value than those of their fellow white editors and journalists?

We should admit to feeling some special personal involvement in the Charlie Hebdo story. When you work for a magazine, it gets your attention when you wake up and learn that another magazine has been annihilated by murderers.

But there is a reason why Western media give more coverage to Islamist horrors in France than objectively worse horrors in a Muslim-majority country. As Canadians we are in approximately the position of France: an advanced Western state with a large Muslim minority, a minority in which a handful of members are converting to politically extremist strains of Islam and who are seeking weapons, training and advice from terrorists. We face the same infuriating complexities, and the same difficult responsibilities, as France. It is not just that we stand with France; we are in the same boat already.

Judging news by a simple counting of bodies is a model that nobody follows in practice—that nobody ever could. But the odd fact that accompanies this principle is that Boko Haram’s attack on Baga has significance far beyond the immediate human consequences. Boko Haram, like Islamic State in Mesopotamia, has precipitated a crisis of legitimacy for acknowledged governments. It is beginning to establish its own authority in the place of uniformed armies, constitutions and democratic apparatus.

It is not just one government that faces this rivalry from bandits drunk on 200-proof desert religion: over the past year Boko Haram has begun to strike at Cameroonian targets, and other states in the region are concerned. Efforts to maintain a multinational common front against Boko Haram have met with setbacks. The government base in Baga was at one time occupied by a joint strike force that has fallen into abeyance. Meanwhile, the dispersion of refugees from the Borno state has the potential to set the legitimate governments in that part of Africa at each other’s throats. It is a phenomenon we have seen before. Refugee camps themselves have a nasty habit of creating the conditions for religious radicalization and recruitment of suicide bombers.

As its local influence increases, Boko Haram is, by a rough Darwinian process, becoming more effective and sophisticated as an armed force. The conflicting, sometimes elliptical information coming from the Nigerian army about the Baga massacre suggests that underpaid professional soldiers, long suffering from low morale, did not put up much resistance to bush fighters bent on killing. Boko Haram has already been all but wiped out once, and its leadership been exterminated. This is the high price insurgencies pay for learning to fight real armies, but once paid, it delivers its weight in gold. Now Boko Haram is beginning to imitate the nihilist glamour of its rival caliphate, Islamic State. Its new use of young female suicide bombers to attack public markets sends the perverse message that it will stop at nothing, that it cares for nothing worldly in its war on “Western” commercial openness, freedom and reason. An enemy of this nature is the hardest of hard problems.