The elephant in the room for the animal rights movement

The killing of the gorilla Harambe is sad. But in choosing between its life and that of a human child, the choice was obvious 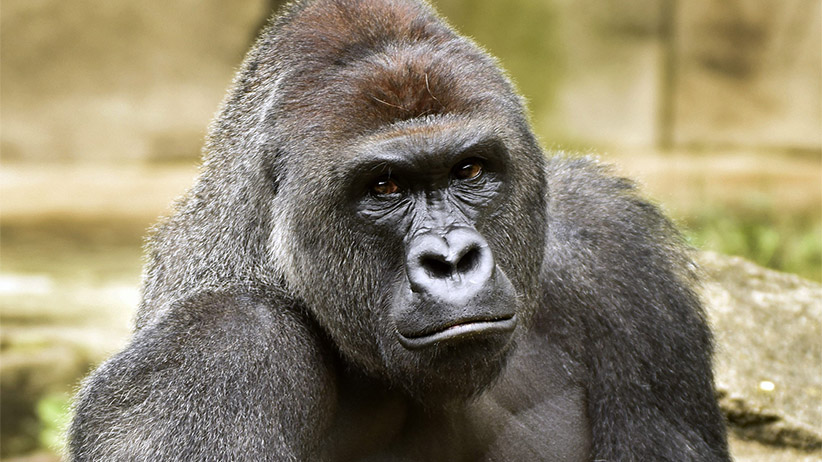 Photo provided by the Cincinnati Zoo and Botanical Garden shows Harambe, a western lowland gorilla, who was fatally shot Saturday, May 28, 2016, to protect a 3-year-old boy who had entered its exhibit. (Jeff McCurry/AP)

Is it proper to kill an endangered gorilla to save a four-year-old boy? Of course it is. And the reasons why lay bare the philosophical flim-flammery behind so much of the burgeoning animal rights movement.

The incident last weekend at the Cincinnati Zoo & Botanical Garden seems a Sophie’s Choice of the animal world. A four-year-old boy vaulted a metre-high fence, crawled through some bushes and dropped 4.5 m into a moat surrounding the zoo’s famed gorilla display, where he came face-to-face with Harambe, a rare lowland gorilla weighing 420 lb. Harambe cornered the boy and then hauled him up a ladder by his ankle, although it wasn’t clear the animal meant any deliberate harm.

“This child was being dragged around; his head was banging on the concrete,” zoo director Thane Maynard said afterwards. A sharpshooter from the zoo’s dangerous-animal-response team killed Harambe with a single shot. “We are heartbroken about losing Harambe, but a child’s life was in danger and a quick decision had to be made,” Maynard added.

Considerable anger has been directed at the boy’s mother, who obviously failed to keep a watchful eye on her son. There have been vigils for Harambe and the usual condemnations of keeping animals in captivity. But almost no one has questioned the ethics of shooting an animal, however innocent, magnificent or endangered, to save an errant toddler. This is significant.

Plenty of recent evidence reveals a welcome and growing social concern for animal welfare. This month, Ringling Bros. Circus retired its entire elephant troupe in response to public outcry. SeaWorld has similarly announced an end to its killer-whale breeding program. Many Canadian fast-food restaurants now plan to serve only eggs laid by cage-free chickens. Consumers, businesses and regulators now recognize a moral and legal duty to ensure animals under our care are safe from mistreatment, even if they’re bred to be consumed.

But there’s a sharp distinction to be drawn between human concern for the well-being of animals and the notion that animals have inherent rights of their own. It has become fashionable to construct legal, biological and philosophical arguments of equivalency between human and animal—that non-human animals deserve the same privileges and benefits we upright primates accord ourselves. To elevate one’s own species above other creatures is now dismissed as “speciesism.”

The recent documentary Unlocking the Cage follows the courtroom efforts of American lawyer Steven Wise, who argues apes, dolphins and other mammals are legal “persons” and thus their captivity must be considered “detention of an autonomous being.” The new book Are We Smart Enough to Know How Smart Animals Are? by primate researcher Frans de Waal claims animals display morality and intelligence on par with or superior to humans. Earlier this year, two Canadian universities held a workshop discussing how best to provide animals with “political rights.” (The organizers did admit this posed certain challenges since “animals are unable to engage in most formal and informal modes of political participation, including voting, holding office, jury service, petitioning, canvassing . . . ”)

Those who claim humans are simply one of a multitude of other animals are ignoring some very large elephants in the corner. Beyond the scale and scope of humankind’s genetic success, intelligence and engagement in artistic, communal and industrial endeavours, perhaps the most significant difference between us and the rest of the animal kingdom is that we alone consider, worry about and plan for the interests of other species. Chimpanzees don’t care about the monkeys they kill and eat, animal rights critic Wesley J. Smith points out. Neither do elephants weep for the birds’ nests they crush as they forage. Only humans can transcend base instincts to make complex ethical decisions.

Accepting inherent animal rights means claiming a bizarre equivalency between running over a squirrel with your car, and hitting an elderly pedestrian. Or between shooting an endangered gorilla and letting a four-year-old boy die at his hand. But these are not equivalent options: a boy’s life is unquestionably more valuable.

That we collectively are saddened by the death of Harambe, expend effort to protect and improve the life of gorillas as well as other animals and—at the same time—recognize the necessity of killing an animal to save a little boy reveals the finite limits of the animal rights movement. Animals deserve our care and sympathy, but they are not the same as us.