The end of China's one-child failure

The policy to stop out of control population growth changed social and family norms in dangerous, tragic ways 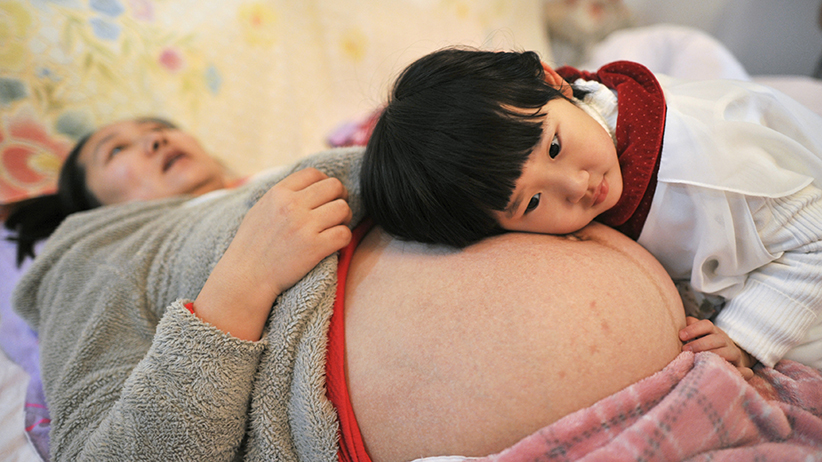 Li Yan (L), pregnant with her second child, lies on a bed as her daughter places her head on her mother’s stomach in Hefei, Anhui province February 20, 2014. Li gave birth to a baby boy on February 23, 2014 after Li’s family became the first to receive a birth permit to have a second child in the province earlier this month. (China Daily China Daily/Reuters)

China’s announcement Thursday that it will ease the one-child policy that has imposed state control over the fertility choices of hundreds of millions of women for more than three decades is a partial acknowledgment of what a colossal disaster it has been.

Now, instead of being limited to having one child, most Chinese families will be allowed two.

The one-child policy was introduced in the late 1970s because of fears that the country’s population—already the largest in the world—was growing out of control.

There have always been Chinese who were allowed to have more than one child—ethnic minorities, for example—and the number of exceptions to the policy have grown of late. But for others, the one-child policy has been rigidly and harshly enforced. Pregnant women have been forced to have abortions, including in the third trimester, or have felt pressure to end their pregnancies out of fear that they or their husbands would lose their jobs if they did not.

Because many Chinese families want a male heir, girls are more likely to be aborted or even killed after birth. “There’s a kind of unspoken but widely known [trend],” says Joshua Fogel, a historian at York University. “There’s all kinds of female infanticide that’s been going on for decades. So what’s happened is there’s this huge population imbalance now. And that doesn’t bode well for the future.”

Millions of Chinese men can’t find wives and start families simply because there are fewer women than men.

The policy also changed social norms surrounding the family, says Fogel. “You could actually see this walking around China in the ’80s and ’90s,” he says. “Since people knew they were not going to have six or eight children in their family, like perhaps their grandparents had, once you had that one child—and for most people preferably a male child—and now that people had more money, they doted on that child. They called them ‘little emperors.’ These little boys, they’d be dressed up literally like little emperors. And they were often overweight, because people now had more calories in their diet and were foisting it on their youngest one. So it had some serious cultural impacts as well.”

It was the economic impacts of the one-child policy, though, that likely caused China’s ruling Communist party to relax its efforts at population control.

When China’s economy was more strictly controlled and rural, the one-child policy was not so damaging, says Fogel. Chinese were assigned jobs, and everyone was taken care of—“with the exception of government leaders, at a fairly low level.”

But as China has urbanized, its economy has become more capitalistic. It depends on increasing numbers of young people entering the workforce. China’s aging population will also need people to care for it, and this too requires more children.

This is a policy amendment, not a change. Instead of a one-child policy, China will now have a two-child one. State control has not been lessened, even if what’s allowed has expanded.

The impact of the change will likely not be felt for at least two decades, when children born after the change begin working and starting families of their own. If they’re lucky, by then China will have jettisoned completely the idea that it has the right to control the wombs of Chinese citizens, and the fates of their unborn children.