The end of Ukraine?

Putin has dealt a punishing blow to Ukrainian independence. NATO’s inaction may only embolden him to do more. 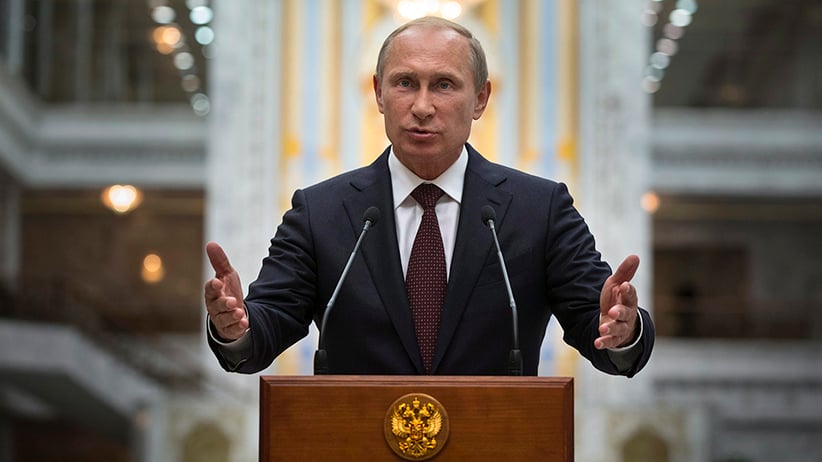 “We condemn in the strongest terms Russia’s escalating and illegal intervention in Ukraine and demand that Russia stop and withdraw its forces from inside Ukraine and along the Ukrainian border.” So declared the member states of most powerful military alliance in history, the North Atlantic Treaty Organization, at the conclusion of its annual summit in Wales last week.

The alliance backed up these words with an announcement that it would conduct small-scale joint exercises with the Ukrainian military near the Ukrainian city of Lviv, which is about as far from the fighting in eastern Ukraine as it is possible to be without crossing the border into Poland.

NATO also pledged to help Ukraine reform its defence and security sectors and to promote greater interoperability between Ukrainian and NATO forces. Lest anyone think such familiarity might be put to use in eastern Ukraine, which has been invaded by Russia and where more than 2,600 people have died in a Moscow-fuelled insurgency, the statement noted that “these efforts are designed to enhance Ukraine’s ability to provide for its own security.”

Ukraine, in other words, will continue to enjoy the privilege of sending its soldiers to risk death on NATO missions in places such as Kosovo and Afghanistan, but when it comes to a war on its own territory it is effectively on its own.

NATO issued its statement the same day that Ukrainian President Petro Poroshenko endorsed a ceasefire deal signed in Minsk between representatives of Ukraine, Russia and the self-declared rebel republics in the Ukrainian provinces of Donetsk and Luhansk. Despite outbreaks of violence since, the ceasefire has not collapsed. Still, it must be considered extremely fragile.

While no doubt welcomed by many Ukrainians suffering from five months of war, the deal is a turning point in the Ukrainian insurgency that represents a punishing blow to Ukrainian independence, and it’s a boost to Russian predatory ambitions beyond its borders. Alexander Zakharchenko, “prime minister” of the Donetsk People’s Republic, told reporters in Moscow that the ceasefire talks were a “legitimization” of the rebel republics, and Ukraine has been forced to negotiate with their leaders as if they were genuine politicians rather than “terrorists,” as Poroshenko had previously described them. But the setback for Ukraine is more than symbolic.

“I think it is a serious tactical victory for Mr. Putin,” says Andrei Piontkovsky, a Moscow-based political analyst, speaking of the ceasefire deal. “He created a new frozen conflict,” Piontkovsky continued, comparing the situation in eastern Ukraine to that of Transnistria, a breakaway region of Moldova that is in practice occupied by Moscow. “Like in the case of Moldova, this tumour on Ukraine’s borders will become his instrument in preventing any undesirable, for him, economic and political development in Ukraine—firstly movement toward the model of European economic and political competitiveness.”

There was a time earlier this summer when it appeared that even without outside help Ukraine might prevail against the Russian-backed separatists in Donetsk and Luhansk. After suffering a series of setbacks against the aggressively attacking insurgents during the spring, Ukraine’s armed forces regrouped in July and August and took back large chunks of the territory they had previously lost.

This presented Russian President Vladimir Putin with a dilemma. Even though he had denied—in the face of overwhelming evidence to the contrary—that Russia was involved in the Ukrainian insurgency, the rebels were widely perceived to be Russian proxies, and Putin believed Russian interests demanded that they not lose. “He refused to accept the insurgents’ defeat,” says Dmitri Trenin, director of the Carnegie Endowment for International Peace Moscow Center. “He put his finger on the scale of the battle in Donetsk.”

Related reading: Is Putin getting away with murder?

Putin’s finger took the form of columns of Russian tanks and armoured vehicles, including one that in late August attacked the border town of Novoazovsk in southeast Ukraine, opening up a new front where previously there had been no significant rebel activity for weeks. Ukrainian government forces reeled in retreat, leaving behind the charred skeletons of their destroyed vehicles as they limped westward, stunned and often wounded.

Trenin describes what happened during the last week of August and first week of September as a “defeat” for Ukrainian government forces. And it’s true that the balance of power across the conflict zone was radically and perhaps irrevocably changed as Putin demonstrated that he would do whatever was necessary to prevent a Ukrainian victory.

This followed a pattern Putin established months ago. When small numbers of covert forces—the so-called “little green men” who first appeared in Crimea and later spearheaded the takeover of municipal buildings in eastern Ukraine—were not enough, he sent more and better-armed troops. With them came ever more preposterous explanations: When some of these men were captured inside Ukraine, Moscow claimed they were there because they had gotten lost. Some Russian soldiers were fighting alongside Ukrainian separatists, a rebel leader eventually allowed, but said they were on leave and had chosen to spend their vacation fighting for freedom rather than lounging on a beach.

Even the downing of Malaysia Airlines Flight 17 over rebel territory in eastern Ukraine—an act that killed 298 civilians—did not cause Putin to scale back his support for the insurgents. According to the BBC, locals in the area said men who appeared to be Russian soldiers were seen operating a sophisticated BUK missile launcher shortly before the plane was hit.

NATO and Amnesty International have released satellite imagery purporting to show Russian troops and heavy weaponry operating inside Ukraine. Russia maintains this is all propaganda. But in Russia itself, some soldiers killed in Ukraine have been secretly buried, and journalists trying to confirm their deaths by visiting cemeteries have been attacked. Russian state television channels have more recently shown the funerals of Russian soldiers killed in Ukraine, praising their bravery and patriotism but sticking to the Kremlin script that they were in Ukraine solely as volunteers.

Putin’s willingness to continually escalate Russia’s intervention in Ukraine presented Poroshenko with a dilemma of his own. He knew Ukraine’s armed forces could not defeat those of Russia, and NATO wasn’t coming. So he agreed to the ceasefire. The agreement, while providing for prisoner exchanges and amnesty for some fighters, does not outline what an eventual political settlement might look like. It is difficult to imagine one that both sides would accept. Poroshenko has already promised to protect Russian language rights and to decentralize political power. None of this has satisfied the separatist leadership or their patrons in Moscow.

If Poroshenko can take any comfort from the predicament in which he finds himself, it might be that he never really had any good options. The much-ballyhooed rapid reaction force that NATO announced is meant to protect existing members of the alliance. And not only has the West not provided meaningful military aid to Ukraine, it has also failed to mobilize sufficient financial resources to support Kyiv, notes Balázs Jarábik, a visiting scholar at the Carnegie Endowment for International Peace.

“Ukraine is essentially broke,” says Jarábik. This, in addition to the mounting human cost of the war, has pushed some Ukrainians toward support for a ceasefire that they might have resisted when the insurgency began in April. This, too, plays in Putin’s favour. He can weather a collapse of the ceasefire and a resumption of hostilities far more easily than can Ukraine. The fighting is not on Russian territory, and any public or press opposition to Russians dying in a supposedly Ukrainian civil war can be effectively squashed. 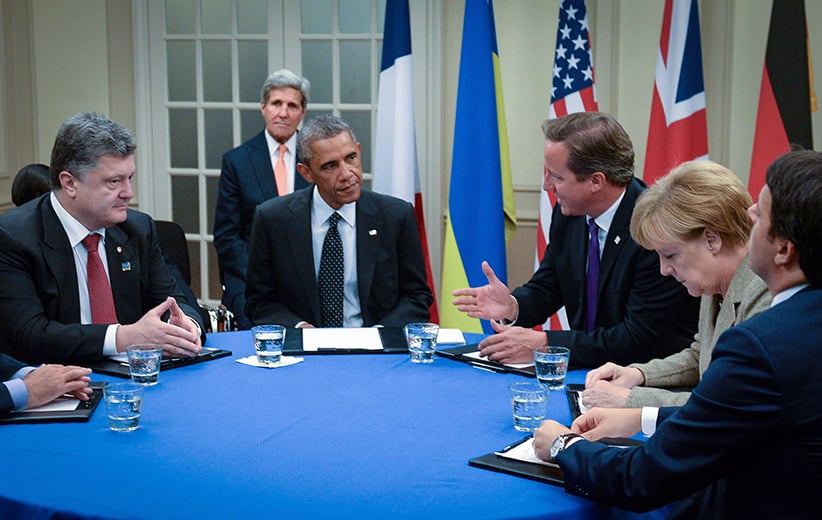 Western sanctions are supposed to tilt this balance by making the war more painful for Russia. Canada, the European Union and the United States have levelled several rounds of sanctions against Moscow since Russia annexed Crimea in March. The EU announced its latest round of sanctions on Monday. These have damaged the Russian economy, but they haven’t stopped Moscow.

“Nothing that’s on the table here is strong enough to change Putin’s calculus,” says Andrew Weiss, vice-president for studies at the Carnegie Endowment for International Peace. What’s more, he says, the longer the sanctions are in place, the more difficult it will be to maintain Western unity over them. Many European countries have close economic ties to Russia. Western sanctions, and the retaliatory Russian ones, hurt those countries as well. Here, too, Russia is likely willing to absorb more punishment than its adversaries. “Russia is prepared to fight harder to keep from losing Ukraine than the West is prepared to fight to get it,” says Steven Pifer, a senior fellow at the Brookings Institution and a former American ambassador to Ukraine.

But there’s another factor to consider, says Pifer: “Do the Russians care more than the Ukrainians? How hard are the Ukrainians prepared to fight if this ceasefire collapses?” Putin was no doubt correct when he told European Commission President José Manuel Barroso that Russian forces could take Kyiv within two weeks, but holding it would be another matter. And even the Kremlin’s much more modest military goals, such as conquering enough territory to link to Crimea to Russia by land, would require a sizable Russian investment in troops and money to maintain in the face of a Ukrainian guerilla campaign. Pifer believes the West should provide advanced arms to Ukrainian forces, such as high-end anti-tank weapons, not because these might allow Ukraine to beat the Russians, but because doing so would “drive up the costs to the Russians of invading.”

Poroshenko has said some NATO member states promised Ukraine such weapons, but no donor countries have confirmed this. A spokesman for Canadian Foreign Affairs Minister John Baird says Canada is not arming Ukraine, although Ottawa has sent non-lethal assistance. Pifer notes that were the West to arm Ukraine, there is no guarantee that Russia wouldn’t simply increase its own military intervention. “But it’s still worth doing because there has to be penalties for this Russian misbehaviour. And if there are not penalties, does the Kremlin come away with the conclusion that this is something that they might try elsewhere?”

“Here’s the scenario I worry about,” Pifer continues. “How would NATO respond if 50 or 75 little green men took over a radio station in eastern Estonia? This could be tempting to Vladimir Putin if he could plausibly say, ‘They’re not mine.’ ”

Only a year ago, such a scenario would seem far-fetched. But Russia’s invasion of Ukraine and its annexation of Crimea have completely changed what’s predictable regarding Moscow’s behaviour. Putin has fashioned himself as a defender of the “Russian world,” and of ethnic Russians wherever they might live. Many live beyond Russia’s current borders.

Putin’s ambitions might have been restrained had he failed in Ukraine. But so far he hasn’t. It’s not a complete victory—Putin’s aggression has awakened NATO, and the alliance is now focused against Russia for the first time in two decades. And support for foreign wars is difficult to maintain indefinitely, even for a quasi-dictatorship with near total control over the media. But in his confrontation with the West over Ukraine, Putin is winning. There will likely be other fights ahead.