60 years after the end of the war, Canadians who fought are finally being recognized 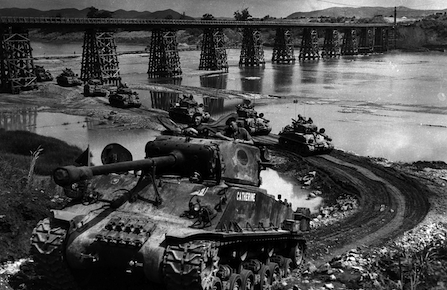 The article below was first published July 21, 2013, in the lead-up to the 60th anniversary of the Korean War Armistice, July 27:

When Donald Dalke left his home in Lethbridge, Alta., at 19 to fight in the Korean War, he was told not to expect a medal. “We were informed we couldn’t qualify for medals because, as far as the government was concerned, they did not declare war and so there’s no war,” recalls Dalke, 82, who served as a volunteer with the Army’s Royal Canadian Horse Artillery. “They said, ‘We’ve just offered some men to the United Nations, therefore, it’s looked at as police action.’ ”

Career soldiers complained and eventually received medals. Volunteers were recognized, too, but not for another 30 years. “The Gulf War came up and they got every medal that was in the box,” says Dalke. “That was the point [at which] we really raised hell and they said, ‘Well, I guess you can have that [volunteer] medal.’ ”

It is known as the Forgotten War, and a new poll suggests the Korean War and its veterans remain in the shadows of other global conflicts. More than 20,000 Canadians fought as part of the United Nations mission after Communist forces from North Korea, along with their Chinese allies, launched a surprise attack across the 38th parallel into South Korea, touching off a brutal three-year war. Many soldiers went into battle already damaged by the Second World War, and thousands suffered physical and mental scars.

July 27 marks the 60th anniversary of the Korean War Armistice, not that most Canadians know that. When asked the significance of that particular date by pollster Ipsos Reid, 63 per cent of Canadians didn’t know. Respondents variously guessed July 27, 1953, was when Newfoundland joined Canada, when Lester B. Pearson received the Nobel Peace Prize or when the Second World War ended. (Ipsos Reid conducted the poll on a sample of 1,009 Canadians between July 2 and 7.)

Anthony Wilson-Smith, president of the Historica-Dominion Institute, which commissioned the poll, was not surprised. “There’s a reason why it is called the Forgotten War,” he says. “I’m not even sure you’d do that much better in the U.S. with a similar poll.”

The Korean War marked the first time Canadian women joined senior military ranks. It also stands out for the high rates of post-traumatic stress disorder suffered by combatants. “Anecdotally, it is believed to be the highest rate [of PTSD],” says Wilson-Smith. “In the European theatre [during the Second World War], the conditions were at least a bit more familiar. Korean conditions were very harsh and very different from anything any Canadian would have seen before.” Vastly outnumbered by opposing forces, and burdened with equipment wholly unsuited to the mountainous terrain, Canadian troops were thrust into a conflict involving a culture and society to which they could hardly relate. Over the bloody three-year war, Canada suffered 1,600 casualties, including 516 deaths. An additional 7,000 Canadians served as peacekeepers for two years after the armistice. That truce left a 250-km-long, four-kilometre-wide Demilitarized Zone, where tensions today remain as heated as ever.

While Canadians may be foggy on the specifics of the Korean War, the Ipsos Reid survey found close to 70 per cent believe the conflict is important to Canadian history. To that end, Ottawa has declared 2013 the Year of the Korean War Veteran and passed legislation to establish a new national day of recognition in their honour. “Their sacrifices were not made in vain,” says John Bishop, national president of the Korea Veterans Association of Canada. “South Korea is a vibrant nation today as a result.”

But Donald Dalke says the honours come too late. “Here we are 60 years later, and for the first time in Canadian history, our government is . . . putting through this bill,” he says. “The amazing thing is that it has taken that long.”

Dalke volunteered for the Korean War, having tried unsuccessfully to enlist in the Second World War while he was still underage. He was positioned at the front lines as an observation officer and recalls being up against hordes of enemy soldiers. “That was the problem: The Chinese were outnumbering us by at least eight-to, 10-to-one,” he says. “In one particular battle, we got a direct hit on the observation post I was working in. My signaller, who was below me, died. I got blown out of the observation post.” Dalke returned home with shrapnel wounds, but felt fortunate to have survived.

What he remembers most, though, is the bravery of the Canadians serving in the Korean War—bravery, he says, that should never be forgotten.

Tales from the front

Each day for a week this summer, we presented a first-person account and recording from a different Korean War vet, as told to the Historica-Dominion Institute’s Memory Project, which provides every living veteran with the opportunity to preserve their memories through recorded interviews and digitized memorabilia.

Pierre Berton reported from Korea for Maclean’s during the height of hostilities in 1951. When he returned to Canada, he convinced his editors to let him write an editorial. “The Real War in Korea,” published Aug. 1, 1951, took a critical view of Canada’s contribution to the conflict. Sixty years after the Armistice that ceased hostilities, we’ve republished Berton’s editorial. We asked veterans and historians to react to Berton’s words.

SEVEN STORIES FROM THE KOREAN WAR

Digital First Media is chatting with Geoffrey Cain, senior correspondent in South Korea for Global Post. Cain took questions from readers on what Korea is like now, and where it’s headed.