The greatness and the failure of Apollo 11

Allen Abel in Washington: 50 years after the incredible Apollo 11 mission, Trump was in the Oval Office, his head in the stars but no further ahead 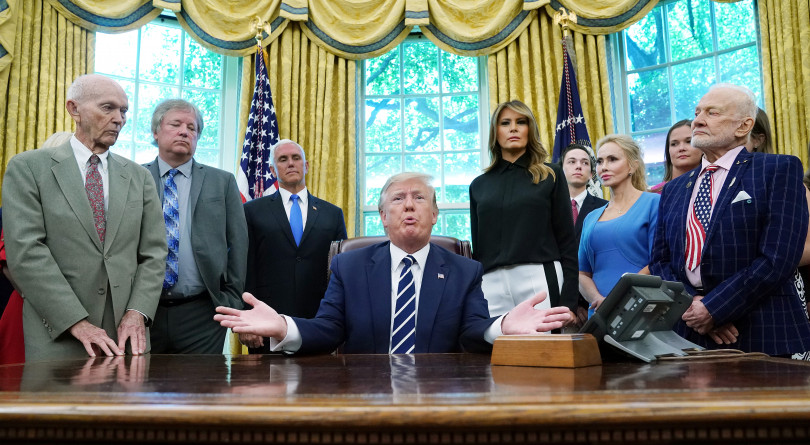 Apollo 11 astronauts join Trump as they commemorate at the White House the 50th anniversary of the moon landing on July 19, 2019 (Chip Somodevilla/Getty Images)

The aerospace news of the day was nostalgia and the usual nonsense in the Persian Gulf. It was a dangerously sultry on Friday in Washington, 100 degrees Fahrenheit in the shade, half that many years to the day since Homo Americanus made his first landing on the unclouded moon and took a phone call from Richard Nixon.

But—as they had every day since lunar module Eagle left Tranquility Base in 1969—earthly affairs mattered far more than moonshine to nearly everyone in gravity’s grip.

Of the seven billion Earthlings alive for the golden jubilee of the Apollo 11 mission, only a dwindling minority of elders, this moonstruck reporter included, remained vertical enough to remember the epiphany first-hand—the culmination of the greatest civilian engineering project since the Pyramids, Easter Island and Sainte-Chapelle—the midnight moment that Vladimir Nabokov described as “treading the soil of the moon, palpitating its pebbles, tasting the panic and splendor of the event, feeling in the pit of one’s stomach the separation from Terra . . . These form the most romantic sensation an explorer has ever known.”

(That romance even infiltrated a teenager’s mildewed basement apartment in Brooklyn, the walls creepy with irrupted caterpillars, a fold-out sofa, grainy wonders on the TV . . .)

“Tranquility, be advised there are a lot of smiling faces in this room and all over the world,” the home team in Houston had radioed to Buzz Aldrin and Neil Armstrong, instants after their successful touchdown.

“There are two of them up here,” Armstrong responded, in the most emotional statement that he ever made.

Now it was 50 years later and Donald Trump was in the Oval Office, his hair aflame with moonglow. On his home planet, Trump’s Navy had shot a nefarious Iranian drone out of the Hormuz skies. (The Ayatollahs said the Yanks had pulverized one of their own spycraft by mistake.) Escalation seemed imminent, but the president’s head was in the stars.

With Trump were 89-year-old moonwalker Buzz Aldrin, Apollo 11 Command Module Pilot Michael Collins, 88, the late Armstrong’s family, and presidential wife Melania, a daughter of the Marxist-Leninist hegemony whose downfall was ordained the second that starship Eagle touched down. (“Fifty per cent approval rating!” Trump tweeted earlier in the day, above a photo of the First Couple, but this may just have been the statistic within his own marriage.)

“Back to the Moon and on to Mars!” Trump has been caterwauling—this has been Buzz Aldrin’s incessant mantra for the past 50 years—and this continued on Friday in the Oval.

“We are bringing the glamour back to it,” gushed Trump, who was 23 when Apollo 11 made history.

“The surface is fine and powdery,” Armstrong radioed as he stepped off the ladder and onto another world on Earth-date July 20, 1969.  “I can pick it up loosely with my toe. It does adhere in layers like powdered charcoal to the soles and the sides of my boots.”

The lunar surface, the pioneer reported, “has a stark beauty all its own. It’s like much of the high desert of the United States. It’s different but it’s very pretty out here.”

Other than buggying about the craters and Alan Shepard shanking a golf ball on Apollo 14, nothing equally transcendent was said or done on the Moon on the next five missions. (Lunologists still are trying to figure out what those darn rocks are made of.) The Apollo program had enough momentum to keep flying until 1972; the era of the Space Shuttle and the International Space Station that followed largely was a figment of bureaucratic inertia and self-preservation, best-known, perhaps, for blowing up 14 American fliers and for a Canadian strumming his guitar.

“The Shuttle commits us to stayin’ home,” the late Gene Cernan, Apollo 17 commander and the last man to press his boots into lunar dust, griped to this writer in the 1990s. Since cosmonaut Yuri Gagarin went weightless in April 1961, only 562 individuals have ridden a rocket into the extraterrestrial void. Twenty-four of them got as far as lunar orbit – 2 bounded on the surface in one-sixth gravity–and almost none of the rest of us, will have a chance to join them any time soon.

But. But. “We” have flitted around the Jovian moons, hurtled through the rings of Saturn, dipped onto Asteroid Bennu and sailed beyond the arc of Pluto, have crawled here and there on Mars, all without a human helmsman.

Spacefaring is the outermost thing on most 21st-century American minds and Marswalking hardly ranks within the top 50 priorities of the myriad Democrats slavering to succeed the nation’s spacey incumbent.

This is not a new sentiment.

“It means nothing to me,” Pablo Picasso told The New York Times on the day of the first moonwalk. “I have no opinion about it, and I don’t care.”

“How can this nation swell and stagger with technological pride when it has a spiritual will so crippled, when it is so weak, so wicked, so blinded and misdirected in its priorities?” Jesse Jackson dared to howl, on that luminous night.

“We are willing voyeurs on a hot night in July, praying, waiting, knowing that beyond the moon lies August,” limned the poet Rod McKuen in 1969. Then August brought Woodstock, and Woodstock, as much as Apollo, cleaved America into what today are two irreconcilable factions, with Richard Nixon and Neil Armstrong and Donald Trump on one team and Jimi Hendrix and Barack Obama and Ilhan Omar on the other.

Fifty years after an unforgettable summer of lunar rocks and rock n’ roll, Lt. General Michael Collins, who orbited Luna alone while Armstrong and Aldrin cavorted on the Sea of Tranquility, was remembering the separation from Terra and “the world in my window; this little pea about the size of my thumbnail, blue and white with streaks of rust that we call continents, this beautiful, gorgeous, shiny thing, nestled in the universe” and telling us–at a seminar in Washington–that “the United States has to be a power in the world, but a very friendly power, not a power that needs to be dominant.”

“The most wondrous event would be if man could relinquish all the stains and defilements of the untamed mind and progress toward achieving the real mental peace and satisfaction,” said the Dalai Lama in 1969. Half a century later, with the Gulf on edge on a day as hot as Hades, the holy man’s lesson was unchanged—that peace, not space, is the real final frontier.