The haunting remnants of the attacks in Paris

From Vice News, a report from a stilled Paris on a day of mourning, following a night of darkness 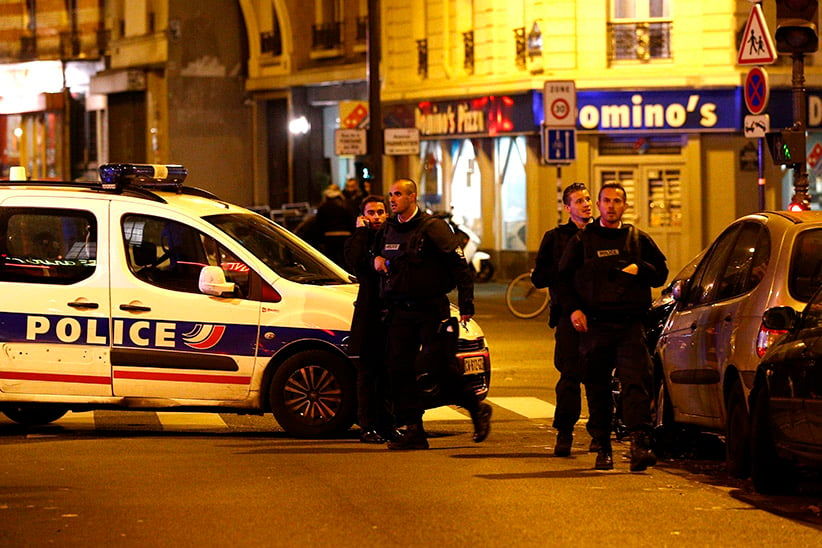 epa05023768 Police officers arrive at the scene of a shooting in Paris, France, 13 November 2015. A shooting occurred in a restaurant late 13 November in Paris, with newspaper Liberation reporting several dead. Explosions have also been reported near the Stade de France. (YOAN VALAT/EPA/CP)

This story, originally published on Vice News Canada, was written by Rachel Browne and Pierre Longeray.

It was around 9:30 Friday night when a young woman and her friend took a seat near the front windows at Le Petit Cambodge, in Paris’s 10th arrondissement. They weren’t supposed to be there — the pair picked the restaurant over a bar at the last minute.

Suddenly, a flurry of gunfire came through the glass, shards just grazing the 24-year-old’s face. She and her friend slammed themselves to the ground under the table and waited. They didn’t see the assailants.

She heard the sounds of guns being reloaded and says they were directed at her and the other diners. She saw the woman next to her had been shot and was surrounded by a pool of blood. Later, she would be carried out to an ambulance.

Then, when the shooting was over, a short time later, she and her friend got up and ran out. They were the first ones to do so.

“It was just an instinct,” the woman, who didn’t want her name used, told Vice News. “It was like no one could help anyone, I couldn’t think of what to do. Except I knew to get up and run.”

She made it home safely and got an hour of sleep. “I took some painkillers and my adrenalin was pumping all night,” she said. Today, she feels more numb than anything and feels more detached from what happened every time she retells the story. “I feel sad that I don’t feel very sad right now. I’m confused. But I sense devastation.” 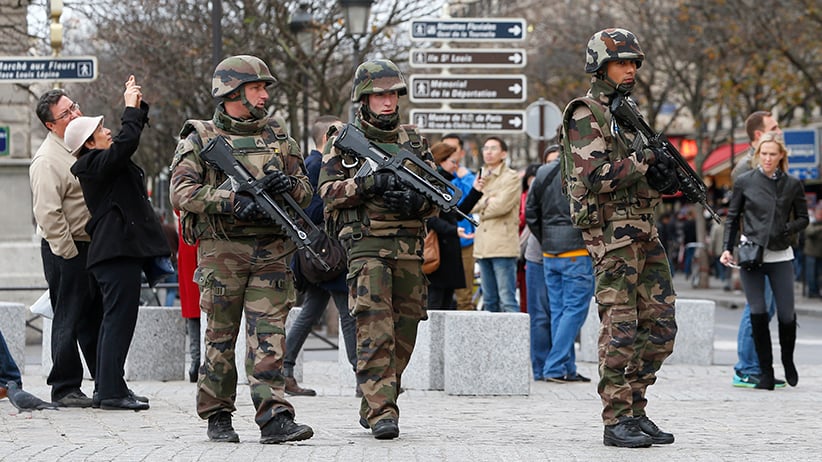 Tourists pause to take pictures as French military patrol near the Notre Dame Cathedral (not seen) the day after a series of deadly attacks in Paris, France, November 14, 2015. (Yves Herman/Reuters)

The weight of the pall of silence over the French capital changes with the neighbourhood. In front of Notre-Dame or of the Eiffel Tower or near the Louvre, tourists take selfies as usual, as soldiers on alert patrol around them. But in the rest of the city the streets are empty and whatever traffic there is flows easily, a most unusual sight on a Saturday afternoon in Paris.

Near Place Vendôme, close to the Louvre this morning, business seemed to go on as usual with packed streets, kids riding bicycles, and a lot of people outside, drinking coffees.

“There is nothing left for us here,” a Swiss tourist told Vice News. He and his wife are trying to get back on the next plane.

Related: Death toll rises in Paris, with at least 129 killed

At the sites of Friday night’s attacks, silence reigns—except for the area around the Bataclan theatre, where the world’s media is camping out and doing live shots. What was a bar or a restaurant yesterday turned overnight into a crime scene, and today into a place of mourning. Some people cry; others leave flowers and light candles. Bullet impacts in the windows of the cafés still speak of the extreme violence of the coordinated attacks. 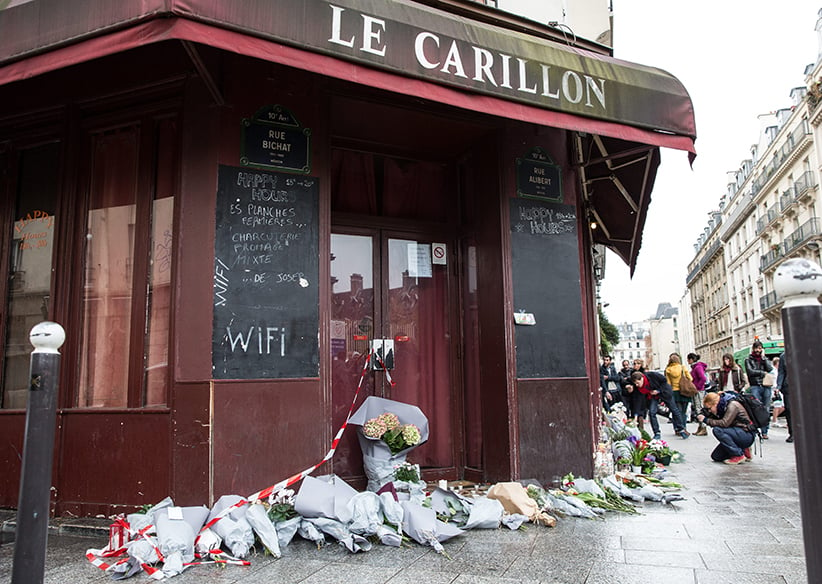 Police buses drive in convoys through a stilled Paris. Many stores are closed; only a few have opened today, but almost no one ventures in. Gatherings and any kind of demonstration have been forbidden by the authorities, for reasons of security. And yet, some Parisians are assembled on Place de la République, the same square where people massed in solidarity not even a year ago, after the attack on Charlie Hebdo on Jan. 7. In this now-symbolic place, anonymous Parisians have tagged a wall with the city’s Latin motto: Fluctuat nec mergitur – “Tossed by the waves, yet will not sink.”

The 24-year-old woman at Le Petit Cambodge has lived in Paris for 18 months and was here during the Charlie Hebdo attacks. She never thought this would happen again and never thought she would fear living in Paris. “It feels like a strange coincidence, like this isn’t really my life,” she said. “I’m just shocked.”

And she says Paris seems different this time compared to after Charlie Hebdo.

“There’s more trepidation this time,” she said. “People understand what it means now, whereas they might not have before. This time, it’s different.”

From the archives: Paul Wells on the fight for France