The horrors on the frontlines of the war for Mosul

Iraqi forces are inching forward to Mosul—and into a horrifying mix of civilians, snipers, car bombs and mortars 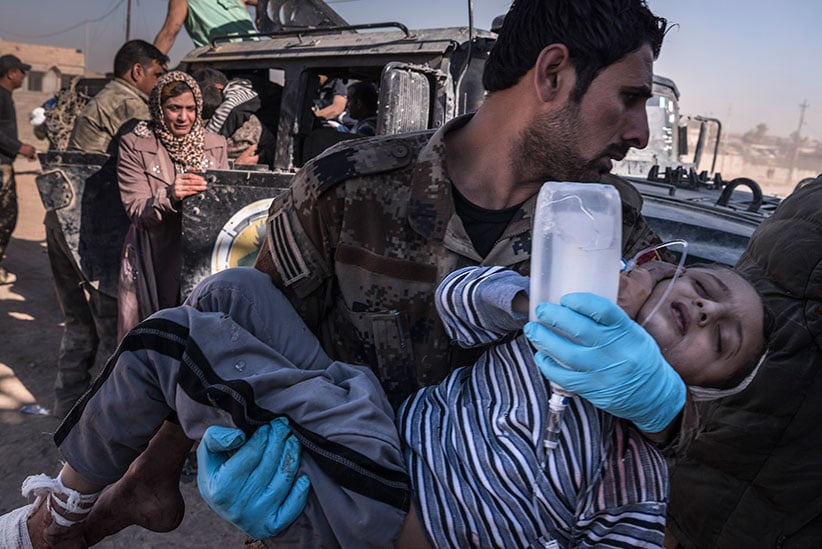 Medics carry a child wounded during fighting to a field hospital on the outskirts of Mosul, Iraq on Nov. 23, 2016. (Sergey Ponomarev/The New York Times/Redux)

By the time the convoy of Iraqi Special Forces Humvees rolls out of its forward operating base in the al Samah neighbourhood of Mosul city, it has already come under sustained sniper fire. An Iraqi mortar team has launched at least a dozen 120mm rounds at Islamic State positions. The sounds of war have ebbed and flowed for hours, in all directions.

But it’s when the convoy enters the tightly woven residential streets of Aden, a neighbourhood near the eastern front, that the first direct signs of conflict emerge. A smiling boy, no more than 10, pushes a wheelbarrow stocked with supplies past a dust-covered corpse lying in a roadside ditch. Nervous residents emerge from their bullet-riddled homes to watch the convoy pass. The adults have learned to be wary—they’ve witnessed saviours turn to oppressors too many times over the years to trust anyone—but the children are ecstatic, flashing v-signs for victory and waving at their liberators.

As the battle for Mosul enters its eighth week, these are the contradictions that have left many wondering exactly how successful it has been. The Iraqi army, led by its elite special forces and counter-terrorism units, pushed into the city’s eastern suburbs at the end of October. Varying reports have described everything from “fierce resistance” to small numbers of Islamic State fighters using guerrilla tactics to slow the inexorable advance. Iraqi authorities have so far refused to release their casualty numbers, igniting rumours of heavy losses.

The offensive in this densely packed city of 1.5 million has inched forward at a glacial pace, 300 m a day according to frontline Iraqi commanders. Some liberated neighbourhoods have returned to a veneer of normalcy while others, sometimes only a street away, remain deserted and dangerous. Islamic State snipers can pop up at any moment while their Hail Mary rounds of mortar fire have become their most deadly weapon, arbitrarily maiming and killing civilians by the dozens every day.

On a tour of the frontlines last week, Maclean’s witnessed firsthand just how difficult the battle for Mosul will be. As the convoy moved through the Aden and Shoqaq neighbourhoods, both technically liberated, mortar fire rained down all around. Islamic State snipers could be seen from the rooftops of homes occupied by Iraqi army forces, sometimes not more than 50 m away, scurrying to find new positions while Iraqi soldiers sprayed them with heavy machine-gun fire.

Most streets were blocked by piles of concrete barriers and mounds of dirt, a reminder of the ever-present threat of suicide car bombs. Frontline soldiers told Maclean’s of their fears of bomb-laden vehicles hidden behind the gates of homes, on streets no more than four metres wide. “They burst out of the gate as our convoys are passing,” one soldier said, requesting anonymity. “We’ve lost a lot of our brothers this way. Every house we pass has a potential car bomb in it.”

Indeed, according to Maj.-Gen. Fazil Barwari, commander of the 1st Division of the Iraqi Special Forces, his troops have already fended off 179 vehicle-borne suicide attacks as of Nov. 24. Other tactics include rocket-propelled grenades and mortars. “These are very dangerous tactics when there are civilians present,” he says. “They are not accurate and they kill a lot of innocent bystanders. Even their snipers have started to target civilians.”

Related: Canada’s role in Iraq is bigger than you think 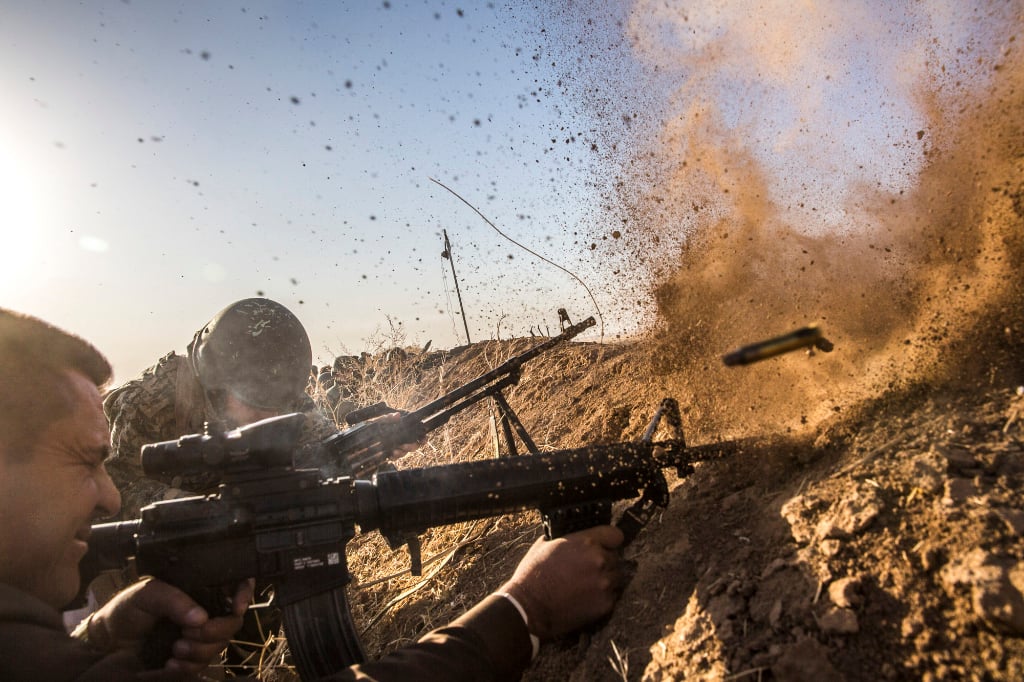 The Iraqi army’s response has been subdued in part, Barwari says, to avoid civilian casualties. The Iraqis have learned from their past experience in Mosul that losing the support of the local population will render the conquest of the city moot and lead to an endless cycle of violence. But it’s a tricky situation. Before the push into the city began, the government in Baghdad showered Mosul with millions of leaflets asking civilians to remain in their homes, hoping to avoid the humanitarian crisis the United Nations High Commission for Refugees warns could reach epic proportions. Aid agencies, however, continue to prepare for the worst-case scenario: upwards of a million displaced civilians.

So far, the exodus has been less than expected. Many civilians have heeded the government’s call and remained. Barwari and other commanders, however, worry that their presence gives ISIS the advantage and forces his men to expose themselves to more danger. They continue to encourage civilians to leave, he says.

Those who have chosen to remain are paying a heavy price. Every day, dozens of wounded arrive at the sparsely equipped field clinic in the al Samah neighbourhood on Mosul’s eastern outskirts, sometimes strapped to the hood of armoured Humvees. The vast majority of injuries are shrapnel wounds from mortar rounds, says Capt. Nizar Jawad, the commander at the clinic, but they are seeing more and more civilians hit by sniper fire. “I was in Ramadi during the offensive there in 2015,” says Jawad. “It was the same kind of injuries but fewer of them because the civilians had mostly fled the city. If they don’t leave Mosul soon, I’m afraid it will be a humanitarian catastrophe.”

Barwari, who also headed the liberation of Ramadi, 350 km south of Mosul, says ISIS militants are taking advantage of the civilian presence. In Ramadi, because of the lack of civilians they could use as human shields, they were forced to meet his men head on. The Iraqis were also able to deploy their heavy weapons—tanks and artillery—which levelled the city but in the process also killed some of Islamic State’s best fighters, he says. 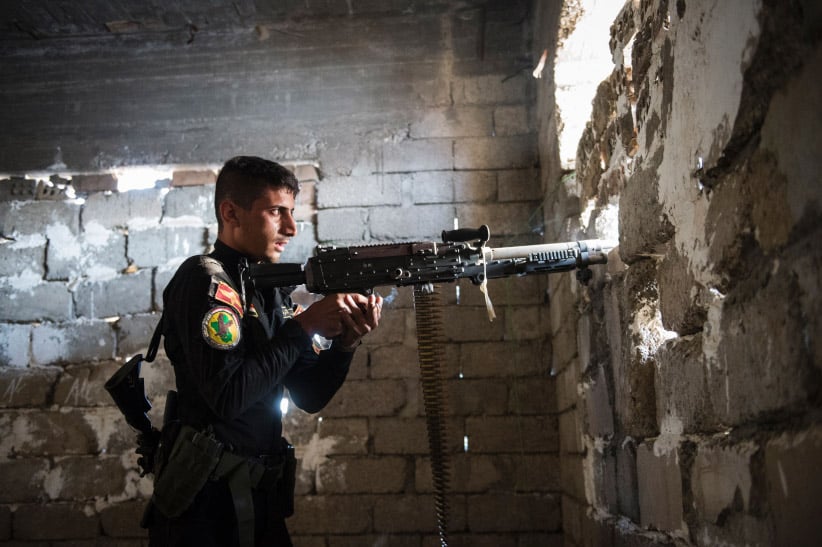 A soldier from the Iraqi Special Forces 2nd division fire his weapon as forces engage Islamic State group fighters pushing through the eastern Samah area and into the Arbagiah neighbourhood of Mosul on November 11, 2016. (Odd Andersen/AFP/Getty Images)

In Mosul, the militants appear to have learned their lesson, relying instead on the guerrilla tactics that were the staple of their predecessors, al-Qaeda in Iraq. Small groups of fighters, no more than four, use civilian cover to navigate Mosul’s rooftops, alleyways, and the warren of tunnels they dug throughout the city, launching a volley of machine gun and rocket fire from one position and then reappearing elsewhere for another attack.

On Mosul’s wrecked streets, that makes moving around risky business, even in supposedly liberated areas. In Aden, a group of soldiers rush by foot into the home of a family that narrowly escaped a stray mortar round. Its shattered remnants litter the street only a few metres away from their front door; one of the family members has been hit by shrapnel on his hand. He is rushed to the field clinic.

Moving on foot to a low-rise apartment block nearby, another mortar lands fewer than 30 m away. The apartments at first seem to be completely deserted, but then a family appears at one of the blown-out windows. They are told to stay inside and take cover. Another family rushes by the bodies of two ISIS fighters, killed only a couple of days earlier, lying untouched in front of another building. They pay no attention to them, using the Iraqi soldiers as cover to escape.

Leaving behind the dead is not something ISIS usually does, but increasingly the abandoned bodies of its fighters are turning up around the Mosul frontlines. As they change their tactics to surprise attacks behind the Iraqi army’s advance, their fighters are dying in areas under enemy control. Neither civilians nor Iraqi soldiers are interested in removing them, so they remain there, providing food for stray dogs.

Barwari claims these are all signs of Islamic State’s weakness. Others worry the tactics are a harbinger of what’s to come. Clearly, Islamic State has planned well in advance for the assault on Mosul. Stockpiles of improvised explosive devices are being discovered every day; suspected weapons caches are believed to be hidden throughout the city. The small number of fighters and their use of human shields appears to indicate that ISIS commanders are, for the time being, interested in slowing the Iraqi army advance and causing as much damage as possible as they retreat in anticipation of a drawn-out insurgency to come.

As the tour of the frontlines reaches its final location, Maclean’s is given a taste of how that insurgency might look. The convoy of Humvees pulls up to a new Iraqi army forward operating base in the recently liberated Shoqaq neighbourhood. Soldiers there are in a celebratory mood, chanting victory slogans and firing their assault rifles in the air. An armoured excavator is busy piling dirt into barriers to prevent suicide attacks.

Then, without warning, sniper fire erupts. Soldiers and journalists take cover behind Humvees while Iraqi commanders shout orders. “Stay down!” one of them screams. “We don’t know where the fire is coming from!” After some tense moments, the soldiers open fire on where they think the sniper is hidden. The convoy rolls out again. As it moves, the sniper takes pot shots at the vehicles, scarring them but doing little damage.

On its way back to al Samah, more mortars land nearby before the convoy turns back onto the “safe” streets where civilians again tentatively emerge from their homes and children smile and wave. The convoy passes by the body of another dead ISIS fighter and trundles through the wreckage of Mosul’s outlying suburbs. In total, it has travelled less than three kilometres into a city than spans some 200 sq. km.

With Mosul’s urban sprawl in front of them, Iraq’s elite fighters are digging in for a long and bloody battle. Most are resigned to the fact that it will not end soon, possibly dragging on until next spring. Islamic State appears resigned to losing the city but in their final, desperate stand, they may be more dangerous than ever.