The Interview: An MSF doctor on the battle against Ebola

Dr. Tim Jagatic on his Ebola patients, working in a haz-mat suit when it’s 40° C, and the agony of knowing the right help is out there 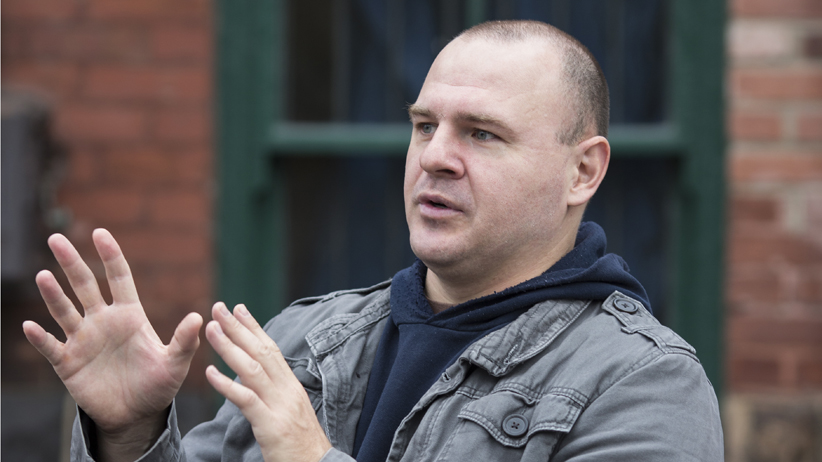 Dr. Tim Jagatic of Médecins Sans Frontières (MSF) first spoke to Maclean’s in July, from Sierra Leone, during his second tour in the war against Ebola. The 33-year-old from Windsor, Ont., was one of the first doctors to help battle the illness in West Africa, working last spring to set up the NGO’s treatment centre in Conakry, Guinea. He expects to return to West Africa in December. With the outbreak now reaching epidemic proportions—more than 4,500 dead; 10,000 new infections per week—we sought his thoughts on a landscape that has since dramatically worsened.

Q: You helped to set up an Ebola isolation unit in Conakry. Do you remember the first time you walked into it?

A: Sure. We had an old cholera facility that we were using for an isolation ward. So we got all dressed in our PPE [personal protective equipment], we checked each other under a buddy system we’d set up, and we said, “Okay, is everybody ready to go?” Then we opened the door, and it was . . . anticlimactic.

A: Completely. There were about six patients in the facility: They were all outside [the tent-like shelter] on their sheets, bored out of their minds and suffering from headaches, fever, a little bit of nausea—normal symptoms for somebody who’s kind of sick. All six were eventually cured.

Q: That gives you a sense of how quickly this outbreak took off, but also how it once seemed to be in hand.

A: Yes. I was able to see then how manageable this could have been. When we saw these people in the very early course of their symptoms, we gave them the treatment they needed at that time and, yes, they all left.

Q: What kind of treatment are we talking about?

A: I’m talking about basic giving of fluids and Tylenol. If you get someone at day 1 of their symptoms, you can really increase their probability of survival. But when you say, “Sorry, there’s no more room in our treatment facility,” then you’re taking that person and waiting for them to come back on day 10, when they’re no longer in a position to be cured. That’s the position we’re finding ourselves in.

Q: A lot about this crisis flies in the face of medicine as we know it, including those haz-mat suits doctors have to wear. They’ve become a disturbing symbol of the crisis.

A: I think there’s misunderstanding as to why we wear them. The perception is that if you even look at somebody with Ebola and you’re not wearing one of these suits, you’ll get infected. That’s not why we wear them. We’re trying to decrease the risk of getting infected to almost zero, because, once you do get infected, it can go through a very nasty progression.

Q: But doctors are used to taking precautions meant to protect their patients—wearing surgical scrubs and masks and the like. In this case, you’re taking very visible precautions to protect yourself.

A: It’s difficult, because there’s the mental and physical barrier between you and your patient. Fortunately, a lot of patients are ambulatory, getting better, they’re able to see us without our PPE on just outside of the “confirmed” area. Sometimes, before we go in, we’ll say, “Hey, I’ll be in in about 10 minutes.” So they’re kind of anticipating seeing us, and they can tell who we are based on our body stature, by the sounds of our voices. We do these little things to try to maintain that human element.

A: Exhausting. We were hitting 40 degrees at the hottest point of the day, and you’re putting your body through a lot of stress when you’re causing it to sweat but don’t have the evaporative cooling effect. There’s a cumulative wear-down, as well. By week 2 or 3, you don’t have the stamina you did earlier.

Q: How long can you go in one session inside?

A: You’re not supposed to be in there for more than 45 minutes to an hour, and that’s the thing: You can’t get all that much done in an hour. Also, there’s no way to stay hydrated as you go. Only when you take it all off can you take your rehydration solution.

Q: It must be hard to overcome the instinct to remove your goggles or gloves.

A: Yeah, that’s a behaviour that you have to pay attention to and unlearn. I was able to prevent absent-mindedly touching my goggles or moving them around, but there were people who would. Hence the buddy system: If you saw somebody do that, you’d say immediately, “All right, get out. Leave right now.”

Q: We’ve heard a lot about the the pitfalls you can run into when removing and disposing of the PPEs improperly.

A: The highest risk comes during the decontaminating process. You walk into a tent on one side of the isolation facility, and step through the chlorine solution. Then we start the process where we have a third party, who has chlorine spray, give us a systematic step-by-step checklist of what we have to do. It’s a fantastic method, because we’re tired and we might not be thinking clearly, so we just wait for the next command. Wash your hands. Remove your apron. Now, let me spray you. Go wash your hands again. Now, remove your mask. Now, wash your hands again.

Q: What happens to the gear after you’ve managed to get it off?

A: We keep the boots on all day. The goggles and aprons are dumped into a chlorine solution, dried out in the sun and reused. Everything else is burned in our pit.

Q: How much did you know about Ebola before you went?

A: I studied tropical medicine in Belgium, so I was academically prepared for Ebola.

Q: Clearly, a lot of us weren’t. Why have we in the West failed to grasp how dangerous this can be?

A: I think the biggest danger is assuming that it’s Africa’s problem. This whole out-of-sight-out-of-mind mentality isn’t going to work. We live in a globalized society. There is hypermobility, and everybody has a greater impact in everybody else’s lives than we are willing to acknowledge. That’s what gives us a responsibility to help in this situation. We really should be there, helping in a greater capacity than we are.

Q: What more could we be doing?

A: We need more people on the ground, with the technical expertise in working with a virus: people who understand the infection-control measures that have to be put in place. People who can help put up the tents. People who can organize outreach programs to be able to get out into the villages. Those people exist—they’re out there. There are seven billion people on Earth with the highest number of educated people ever. You’re not telling me that you can’t find the people to do this job.

Q: I know some MSF doctors have come back from overseas mentally scarred by what they’ve seen. How have you been affected?

A: I want to focus on the hopeful aspects, because that’s what’s going to get us through this thing. All the medical interventions that we have taken part in have produced promising results. So we’re telling the rest of the world, “We can beat this thing with what we’ve got,” and when they ignore us, they’re forcing us to turn our treatment facilities into palliative care facilities. Imagine the ethical dilemma that poses to a physician. Now, we only have room for people who are dying, and we’re turning away treatable cases. You swear an oath to do no harm. But how am I not doing harm when I’m sending somebody home? And it’s all because other actors are not stepping up.

Q: Are there patients who stand out in your mind that you can tell me about?

A: Our very first cured patient was a Guinean doctor, Ibrahim, and he went on to speak on behalf of the humanitarian movement on Ebola. He is a wonderful person to be around. In the isolation facility, he took a bit of a commanding role, taking temperatures of other patients so we didn’t have to. He did some amazing work for us. Another would be our 22-month-old girl in Sierra Leone, Issata, who was the youngest Ebola survivor I saw. She lost her parents to the disease, but she herself was just a little character. She broke out of our facility three different times. We’d just laugh before having to get in our PPE and put her back into the facility and try to explain to her, “Do not cross this fence.” But, you know, she’s all, “Hey, there’s this fence; I want to get on the other side!”

Q: Expertise is important, but it sounds like this job also requires nerve.

A: The best description of courage is not the absence of fear, but accepting the fear and going anyway. We need to do that; fear as part of our coping mechanism. You’re dealing with something that you don’t know. And, yes, there is a chance something might happen, but we have a responsibility toward these people. They deserve to get out of this situation.

Q: A few weeks ago, Maclean’s revealed that the federal government was auctioning off protective equipment like masks, gloves and gowns at well below cost. This was going on, even as NGOs and governments battling Ebola were begging for essential equipment. How do you feel when you hear something like that?

A: It’s frustrating. I mean, let’s just get this job done. Let’s just put everything aside and just think about the bare bones of what this is: a humanitarian crisis, and address it as that. If what we need can be given, give it. End of story.