In her new book, Ayaan Hirsi Ali argues the rise of Islamist extremism presents moderate Muslims with an opportunity for reform 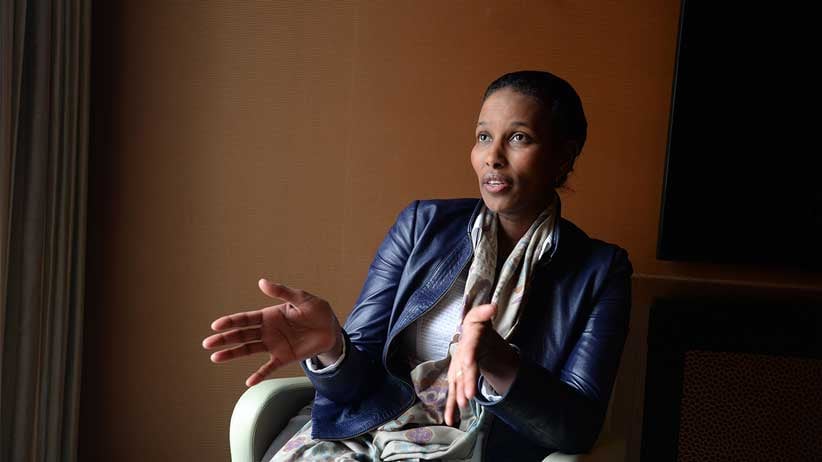 Ayaan Hirsi Ali, 45, born and raised a Muslim in Somalia, sought asylum in the Netherlands as a young woman wishing to escape an arranged marriage. There she went from cleaning factory floors to a seat in the Dutch parliament. By the time she moved to the U.S. in 2006, Hirsi Ali was already one of the world’s most celebrated and reviled critics of Islam. She described her journeys from Africa to America, and from faith to atheism, in two memoirs, Nomad and Infidel. She has now released her third book, Heretic: Why Islam Needs a Reformation Now.

Q: Your central argument is that Islam is not “a religion of peace.”

A: We can’t even have this conversation without first talking about how there is one Islam, unreformed, but three sets of Muslims. Medina, Mecca, and . . . dissidents, reformers, whatever you want to call them. The first group are the extremists and fundamentalists, the second the great mass of Muslims who just want to live their lives in peace, and the third are reformers. Right now, the Medina have the upper hand. By Medina I don’t just mean the renegades—Islamic State, al-Qaeda, al-Shabaab, non-state actors and movements—but large groups like the Muslim Brotherhood, and more importantly, the nation-state of Saudi Arabia, the nation-state of Iran. They are the core centres, with sharia law; Saudi Arabia of Sunni Islam, Iran of Shia.

Q: You reckon believers of that sort as about three per cent of the worldwide Islamic population of 1.6 billion?

A: I go with the three per cent because I don’t want to have any argument about numbers. That’s the most conservative estimate and that’s still 48 million people. And they control state territory, they have tons of resources, and they’re willing to use methods that the other two groups are not willing to use. Their rule is marked by violence, intimidation and aggression that the dissidents are just not willing to use because it’s against their morality. And even if they weren’t [against it for moral reasons] they just don’t have the resources. So I just want to paint a picture of complete and utter asymmetry.

Q: How does a reformation fit in here?

A: If you want to wage a battle of ideas, and you want to help the dissidents, what would you do? The dissidents and the Medina Muslims are fighting for the hearts and minds of the Mecca Muslims, who I think, even though I don’t know how to count them, are the majority of Muslims. The Medina Muslims and the dissidents are both saying, “Join us,” but if the dissidents say, “Oh, if you review the Quran and Muhammad . . . ” immediately they’re told, “You’re a kaffir [unbeliever].” So to give the dissident group a chance to say what they want, I came up with these five amendments to five core precepts within Islam and Islamic scripture, not that everybody on the dissident side will agree with me.

Q: Let’s return to what you want to see changed.

A: Abandoning the literalist reading of the Quran—for extremists, some of the activities that Muhammad performed call upon the believer to do things that in 2015, in the civilized world, we think either fall under a declaration of war, or pure crime. How should Muslims view these? And I’m saying, let’s say those are the sort of things that belong in the seventh century, not now.

Next, and this will be the hardest part for Muslims, is the religion’s excessive investment in life after death instead of life before death. No. 3 is sharia law, very much a goal if you are a Medina Muslim—if you take the Quran literally, what you are seeking is a society that lives under sharia law and large numbers of Muslims in places like Egypt, Pakistan and Iraq want to. Fourth, the little-known concept of “commanding right and forbidding wrong”—I’ll just give you the most atrocious example in recent days. In Afghanistan a woman is accused of burning the Quran, not that she did, but a man screams to a crowd, “She burned the Quran!” and they all come running—men—and they start lynching her. That is commanding right and forbidding wrong in action, albeit extreme, but it all stifles debate and critical thought. Finally jihad, holy war, which should be abandoned entirely. Those are the “five amendments,” which is what I wanted to call my book.

Q: The title you do have, Heretic, is interesting. That accusation doesn’t come from your Muslim critics. For most of them, you are an apostate, someone who has left Islam, with no right to speak about it. Your heresy is from Western progressive attitudes?

A: Yes, and in my book I try to adopt the most conciliatory language, except of course to liberals. I find them just baffling. The Brandeis faculty petition that prompted the university to withdraw its offer of an honorary doctorate said I purveyed hate speech. That for saying the one-fifth of humanity who call themselves Muslim read a book—that they consider the very word of God—that is full of seventh-century attitudes toward homosexuality, women, other religions, and a disturbing number—let’s say 48 million—don’t just believe it but actually want to act on it.

Q: Speaking of antagonism, you write of the cartoonists at Charlie Hebdo and “the world-changing power of blasphemy.” What do you mean?

A: You know how it goes in “The Emperor Has No Clothes,” the little boy who points at him and yells, “Wait a minute, he’s naked!” That was blasphemy and the people who point these things out or who ask questions are accused of blasphemy, of heresy. And the first ones to do so get subdued, silenced, killed, but you can’t kill the idea. Or the questions—the human mind is driven by curiosity. But if you don’t antagonize, you don’t achieve change.

Q: Your book shows a close attention to events in Canada, so you’re probably aware of issues here—one drawing in the Prime Minister—about niqabs and burqas. What is your opinion?

A: Women covering their heads is traditional, but now we’re seeing more and more women covering themselves from head to toe. This is said to be for religious reasons but it’s actually the conflation of religion and politics—every political movement has its slogans, flags and dress. Here’s the paradox, and I think the litmus test: The demand that Islam makes of women is to not attract attention to yourself, and if you are in a secular society, that attire does exactly that, and it is a political symbol, no longer religious.

Q: One root of hostility toward you is the fear of backlash against Muslims here.

A: A cosmetic fear, a fake fear. People have been warning about this backlash for 30 years. European children are educated in a narrative of human tolerance every day, and if you want to be sure to prevent a backlash, you should at least think of bringing Muslim children and teenagers into the fold of that narrative of tolerance.

Q: Instead, youth radicalization—male and female—is increasing among Muslims in the West, something you think has roots more in a kind of cognitive dissonance than in poverty or marginalization.

A: Most Muslims, especially in the West, are caught in that dissonance. They have to think why they even came to the West to begin with, why they voted with their feet. You want a house, a car, medical care, you want to be able to think, “Okay, tomorrow is predictable.” And so that’s what you start investing in, and still there are people reminding you, “You mustn’t be doing that.” These are people who would be thought “moderate” Muslims in the West, though I think the term is useless. The Medina Muslims read the Quran and learn about the Prophet Muhammad and they make an explicit choice. The dissidents make an explicit choice. The Mecca Muslims do not make that choice. They allow themselves to be pulled this way and that way, some to extremism. I know, I have been there. Before 2002, when I thought of myself as a Muslim, I was also behaving and living like an ordinary Dutch woman in her twenties and early thirties. I lived with my boyfriend, I consumed alcohol—I avoided these issues by not thinking about them and by avoiding the people who would remind me of them. That’s becoming ever harder.

Q: And that’s why you think this is a time of possibility as well as crisis?

A: This moment is ripe for a counternarrative. It’s a time of maximum dissonance for the Mecca Muslims. They’re so embarrassed by Islamic State, al-Qaeda, al-Shabaab—every day, you can’t turn on the television without “In the name of Islam” something very, very, very, very bad being committed. And as soon as you really take note of it, you’re going to have to ask yourself, “What have I got to do with this?” And with that new uncertainty, wouldn’t we just all regret it if the Mecca Muslims were pulled to the Medina side? If you don’t like what’s happening, then I think you should speak up. I don’t like it.