Former ambassador Glenn Davidson on leaving Damascus, the civil war, the current peace talks—and what Canada needs to do 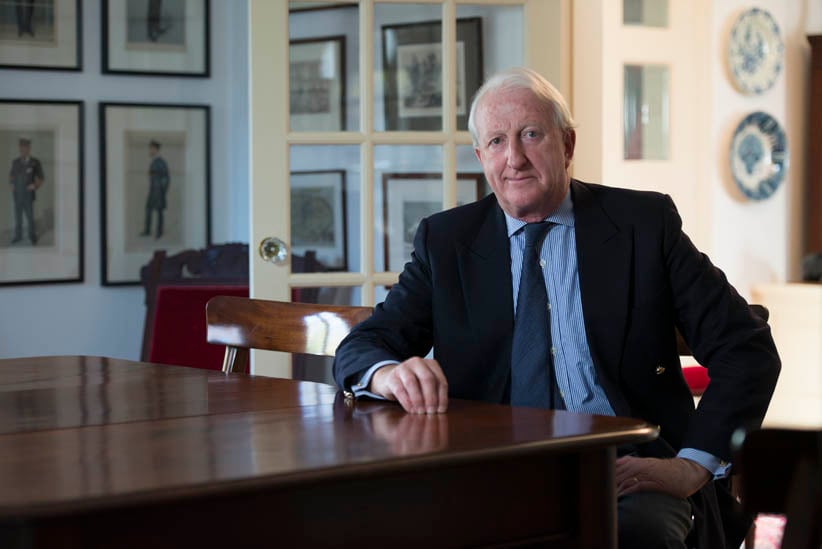 A former career naval officer, Glenn Davidson served as Canada’s last ambassador to Syria between September 2008 and March 2012. When civil war erupted, it fell on his shoulders to close down the embassy in Damascus and evacuate Canadian staff. It remains shuttered. Now 62 and living in Halifax, Davidson is helping fellow Nova Scotians sponsor Syrian refugees—and hoping for the chance, however slim, to return one day to the country he fell in love with.

Q: You arrived in Damascus in September 2008. Describe the Syria you encountered.

A: [As far as] Syria’s relations with the international community, it was a honeymoon period. Bashar al-Assad had just been invited to Paris for Bastille Day celebrations, and tourists were starting to flock in. There was talk of rapprochement with Israel and, over the next couple of years, we really saw relations start to warm. I’ve never met more welcoming and more gracious people than I did in Syria. That may seem like a trite comment, but it’s absolutely true. It’s hard to believe now, but there was actually quite a high degree of popular support for Bashar. It didn’t take very long for that to be completely eroded and for the realities of the regime to become apparent, even to the most optimistic.

Q: When did the violence reach the point that you began to contemplate the possibility of having to shut down the embassy?

A: In March 2011, one year before we left. We watched the situation extremely carefully over the course of that year. We looked at the circumstances around the country, we tracked what was going on, and it became more and more difficult to do business. Our ability to move around the country, even for routine things, was increasingly limited by the government, whereas, in the early days, we had absolutely free movement.

Q: How do you even begin to close down an embassy that employs 100 people?

A: It was pretty hectic. We set the stage over the preceding Christmas. We were concerned that if things took a really sudden turn for the worse, we could be in a position where we had to close very quickly. We had already reduced the families of staff by asking spouses and children to leave in late April 2011; we made it a no-children post, just because of the risk. We decided in January 2012, in consultation with Ottawa, that we would close the immigration section—a huge task. We had tens of thousands of files and decades worth of work that had been collected there. We then made the determination, at the end of February, that all the signs were such that we would have to close.

Q: Did you literally lock the door and leave?

A: Both, actually. We mustered all the remaining staff together in a courtyard in front of the embassy and locked the door. I lowered the Canadian flag, then drove to the foreign ministry to officially advise them that we were suspending operations and leaving the country. Then we drove out to the residence, which was about 20 km outside of town. My local staff at the residence—I’ll never forget this—prepared tea for us, in a wonderfully touching and hospitable way. Then we hopped in the vehicles and drove off through the mountains toward Lebanon: three armoured trucks and two other vehicles.

Q: I can’t imagine the emotions going through your mind.

A: It was emotional in a couple of ways. On the one hand, a great sense of relief that we had done all this planning and it all came to pass. I also felt, deep down in my bones, that the situation was just spiralling down into something, with no end in sight. We had to leave behind our locally engaged staff, which was also very difficult. These people were very loyal. Many had worked for us for years.

Q: Do you know what has happened to your former home and the embassy?

A: The residence was a leased property and I’m told we cancelled the lease. And to the best of my knowledge, the local security staff we contracted are still at the embassy and the property has been respected.

Q: It’s an obvious question, but how often do you think about Syria?

A: Every day. It’s very much in my mind. You are constantly seeing images of things that you knew, places you visited. It is just appalling. We travelled from one end of the country to the other, and we knew Aleppo very well and Damascus very well. The images I see now are just hard to imagine. We talk about the magnitude of the refugee crisis, but the refugee crisis exists because there has been a civil war raging for four years now. The refugee crisis is not going to go away until some resolution to the conflict is achieved.

Q: The most significant peace talks since the start of the war have begun in Vienna, with Iran joining adversaries Saudi Arabia and the United States at the negotiating table. How confident are you of a resolution?

A: The important thing is that talks are taking place that involve the substantive players. I think we need to be very modest in our expectations of this; I look at this as a first step. But the fact that—finally—the Iranians are at the table, and that other people with interests in the conflict are prepared to engage with them, is long overdue.

Q: What is a realistic expectation?

A: I don’t know what shape this is all going to take or what we should hope for in the years ahead. But what I would hope is that the process starts us down the path where there are actually ceasefires that have some reasonable prospect of holding, which can reduce the casualty rate, get some humanitarian aid in, and provide enough stability that some refugees can start to return.

Q: ISIS, of course, is not at the negotiating table. From a strictly military perspective, what role should Canada be playing in the coalition’s fight against Islamic State?

A: That is really a fraught question. You could talk for hours about this particular issue, and there are very profound underlying questions to this. Coalition operations, such as we’re engaged in at the moment, are fundamentally important as the way to tackle this, but it’s the sovereign decision of any participating government to decide what it wants to contribute and how it contributes. I think the important thing is that, in a coalition operation, we have to be a part of it in some way. If we are to keep troops on the ground, that’s great. If we are to withdraw the F-18 support, that is the government’s decision. Perhaps there are other ways in which we could provide logistics or other support and still be part of this.

Q: Prime Minister Trudeau is adamant about keeping his campaign promise to resettle 25,000 Syrian refugees by Dec. 31, which leaves about nine more weeks. Is that realistic?

A: I really welcome a generous and ambitious target. I think this is great, and I think it’s the right thing for Canada to be doing. This is not to contradict the Prime Minister, but I would just say that the really fundamentally important thing is to do it right, rather than do it fast. I’ve seen a lot of coverage in recent days focusing on logistics and how to get people here. That is all very well, but, at the end of the day, the refugees who come here have to be met with a plan in place. If it’s 25,000, if it’s 50,000—perfect. We can do this, and we should do this. But let’s just make sure the next level of detail is right. If this takes place by January or mid-February, will it really matter six months from now?

Q: Moved by news coverage, many Canadians are coming forward to help sponsor Syrian refugees. You have met with some of these groups. Can you describe that experience?

A: It is incredibly heartwarming. I am going to another meeting tonight. All Canadians who are not of Indigenous origin all came from somewhere else, and now it’s our turn—our responsibility, I think—to help. This need is very pressing, very immediate, and the response I’ve seen in a small section of one province is incredibly touching.

Related: Q&A with Mike Molloy, the man who helped deliver the ‘boat people’

Q: But, as you’ve written in the past, sponsoring Syrian refugees is not the only thing Canada should be doing to help ease this crisis.

A: This is not, in any way, to say that what we’re about to do is not important. But if we take in 25,000 Syrian refugees—brilliant and good and right and necessary—there are four million outside of the land boundaries of Syria and another seven million displaced inside. They need help, too. Lebanon, Turkey and Jordan, in particular, are making extraordinary efforts to accommodate these refugees, and they need assistance. Consider Lebanon: They have a population of four million and they’ve taken in one million refugees. We can’t lose sight of that, either. We need to support those international efforts, and part of that is anteing up to help the UNHCR and other organizations that are trying to help there.

Q: If possible, would you consider returning one day to Canada’s embassy in Syria?

A: I’ve always thought that, if asked, I would go. But I’m under no illusions that, were I to do so, what I would see would be a very different Syria—with scars and with injuries and with cultural divides that didn’t exist before. It may be unrecognizable from the country I knew.